Xu Can vs. Shun Kubo WBA Title Clash on May 26 in China

Xu Can --  the reigning world champion from emerging boxing powerhouse, China   --   will defend for the first time his WBA "regular" featherweight world strap against hard-hitting former world title challenger Shun Kubo of Kobe, Japan, this coming May 26 in the historic "Good Luck" Chinese Coastal City of Fuzhou in Southeast China.

The announcement was done by fight promoter Liu Gang during a press conference in China attended by the two 5' 9" fighters who faced off serious but friendly towards each other during the plush media event organized by Max Power Promotions.

The show's main star, soft-spoken 25-year-old Can (16-2, 2 KO's) from the Spring City of Kunming in Southwestern China, claimed his WBA 126-pound world title by surprising, outclassing and dethroning hard-hitting Puerto Rican titlist Jesus Rojas (26-3-2, 19 KO's) in January at the Toyota Center in Houston, and his first title defense is just around the corner. 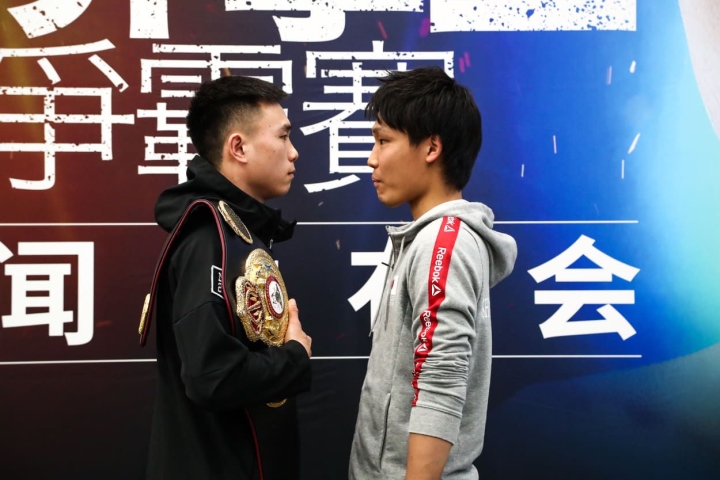 For his battle against his WBA # 10 Nippon challenger Kubo, Can has been training at Liu Gang's M 23 Boxing Gym in Beijing with his preferred sparring partner 22-year-old Filipino lightweight Joepher Montaño (10-4-2, 9 KO's), a young fighter who comes from an impressive come-from-behind spectacular ABF title win just weeks ago in Bacolod, Philippines.

Montaño as sparring is a smart choice for Xu Can's team as the Filipino is of the same southpaw stance, same height same power punching approach as Shun Kubo.    Xu Can is no way near being a devastating hard-puncher so polishing his boxing skills is a must.   In contrast, Shu Kubo is a man with proven power in his hands.

Therefore, in theory, the title match could unfold as the classic engagement of the good tactical boxer vs the coming forward knockout warrior.  Exciting.   Who will emerge victorious?

"In addition, WBA world champion Cañizales will defend against former world champ Sho Kimura.    You should remember that Sho Kimura was the man who terrorized and ended the career of former Top Rank's Golden Cow Zou Shiming before?    Will Sho Kimura stop Cañizales too?    I think May 26 will give fans an exciting show of good boxing," thinks Liu.

However, boxing fans here in Asia are surprised in seeing the 30-year-old Sho Kimura coming back down to 108-pounds because during the last 3 years the awesome samurai warrior has competed exclusively at 112 lbs.

Four pounds at that weight class might be tough to do, especially, when Kimura has grown older and hasn't come down to eight stones in years.

Will the terror of Zou Shiming somehow manage to dominate that further reduction in weight to be strong, fast, and devastating against an aggressive powerful warrior as Carlos Cañizales, the same unbeaten Venezuelan natural 108-pound destroyer who ravaged, ended and sent to hospital his last challenger unheralded Chinese Lu Bin last July in Malaysia?

BoxingScene.com was in ringside in Kuala Lumpur during the Cañizales vs Lu Bin battle.    The 12th round was a severe merciless beating dished out by the mean-puncher Venezuelan titlist.

In fact, Cañizales has performed exceedingly well in all his world title fights in Asia.

The author Carlos Costa is a Panama boxingscene.com reporter living in the Philippines.   Carlos can be reached at [email protected] and whatsapp/viber/wechat: +639184538152.

[QUOTE=Mexican_Puppet;19774272]Thanks man, CCC won, that kid is a good champion, thecnical, he is getting experience ,he is young and has power. He needs to unificate the division, he can do it . Good fighter. Xu is the guy that beat…

[QUOTE=Mexican_Puppet;19773209]Do you have a link bro?[/QUOTE] It was streaming live on facebook, [url]https://www.facebook.com/GoldenBoyFN/videos/328325737837535/[/url] credit to bigdunny1 for the link. Good action in both fights fights ; going to check the highlights of Xu vs. Kubo myself for gifs..

[QUOTE=1hourRun;19773130]I got CCC up by one but Kimura is coming forward ever determined, he looks like hes prepared to go in deep.[/QUOTE] Do you have a link bro?

ADD COMMENT VIEW COMMENTS (29)
Advertisement
Top Headlines Spence: I Got A Second Chance; I'm Not Taking It For Granted At All Liam Smith: Brook's Not Ducking Me, But He's Scared Of Losing To Me McCracken Does Not Expect British Boxers To Turn Backs on Olympics Jack Rafferty Inks Agreement With MTK Global Fenech Explains Why He Left Mike Tyson Over Face Tattoo Eubank Jr. Warns: I Know I Can Beat Golovkin - I'd Take Him Out! Michael McKinson Motivated To Keep Proving Doubters Wrong Goossen, Bernstein, Weeks Reflect On Epic Corrales-Castillo Fight Showtime Will Replay Canelo's Coach Explains Why They Don't Want Munguia Fight Fury-Wilder Location Could Depend on Which Area Recovers Quicker Ngannou Believes He Can Match Up With Fury, Joshua, Wilder Floyd Mayweather Finalizes Deal To Manage His Digital Likeness UFC 249 a No-Go, ESPN & Disney Make Dana White Stand Down Mike Tyson: Boxers Will Always Make More Money Than MMA Fighters Fortuna's Promoter Wants Luke Campbell First, Then Devin Haney Kerman Lejarraga Accepts The Challenge of Sergio Martinez Hearn: Joshua Would Embrace Underdog Role in Fury Fight Derrick Jefferson Transferred Out Of ICU, Continues To Recover From COVID-19 Top Rank Prez: Crawford Wants Spence or Pacquiao, Brook is Option Liam Smith Reflects on Street Fighting Days, Rivalries With Brothers Jose Ramirez: I'm Going To Stay Active In A Very Precautioned Way James: Spence Made Bigger Statement Beating Porter, Garcia At What They Do Best Adrien Broner Ready To Focus 120% On Boxing; People Bank On Me To F--k Around Andrade: Liam Williams Is Not Gonna Be The One To Stop This Train Fernando Vargas Compares His Generation To Current Era Benavidez vs. Angulo: Sampson Secures License in Arizona Canelo's Coach: We Want GGG at 160 - But We'll Make A lot of Noise at 168! Jarrell Miller: A Fight Against Tyson Fury is Inevitable WBA Prez Discusses The State of Boxing During The Pandemic Boxing Will Be Back, But How Much Will It Cost? Canelo's Trainer: I Promise, Golovkin is Getting Knocked Out! Frampton vs. Herring To Land in Late Summer or Early Fall Warren: Tyson Fury Glove Allegations Are Pathetic, It's Stupid! Stevenson: I'm Moving Up To 130 For Sure, Unless It's Warrington Next Carlos Cuadras Eager For Revenge Against Juan Francisco Estrada Sergio Martinez Wants Kerman Lejarraga as Comeback Opponent Devin Haney Reinstated As WBC Lightweight Champion Fury: Coronavirus Can Take Anyone Out, Regardless of How Invincible We Feel Hearn: Joshua Has To Box By Mid-August To Fight Twice in 2020 Mares: I Still Want To Perform At The Highest Level Like I Always Have
Advertisement
Latest Boxing Videos Charles Martin Reacts To Helenius Stopping Kownacki Robert Helenius Reacts To Shocking TKO of Kownacki Adam Kownacki Reacts To TKO Defeat To Helenius Joseph Parker Reflects on Fury-Wilder, Talks Return Mikey Garcia Reflects on Fury-Wilder, Talks Vargas Eddie Hearn Reflects on Fury Stopping Wilder, More Kenny Porter Reacts To Tyson Fury Stopping Wilder Jose Ramirez Reacts To Tyson Fury Stopping Wilder Caleb Plant Reacts To Tyson Fury Stopping Wilder Michael Hunter Reacts To Tyson Fury Stopping Wilder
Recent Top Stories Boxing Will Be Back, But How Much Will It Cost? Aaron Aponte: Tremendous Feeling To Know My Life is Gonna Change Real Soon A Golden Boy Looks at 60: Lalonde Reflects on 'Sugar' Highs and Money Lows Sugar Ray Leonard vs. Marvin Hagler - Boxing Classic Turns 33
Advertisement
Latest Forum Threads
Advertisement
Advertisement
This website may contain adult language.
TM & © 2020 BoxingScene. All Rights Reserved.