Xander Zayas: I Don't Like To Brag About Things, I Just Work Hard

The Instagram post, accompanied by an ultra-rare photo of Xander Zayas without a smile on his face, came just before Christmas.

The 17-year-old had just capped off his first year as a professional and it was the perfect time to reflect that 12 months earlier, on December 16, 2018, was the day when he decided to take this new journey in the punch for pay ranks.

“I wouldn’t say it was scary, but it was a really hard decision, not just for me but for my family and my entire team,” said Zayas, the amateur star who decided to forego the wait for the 2024 Olympics to turn pro. “For my mom, I’m her baby, so it was really hard for her. And for my dad too and my coach and my manager, it was really hard for everybody, but I think I was ready and my family thought I was ready too. We were all on the same page and we made it happen. But it wasn’t an easy or overnight decision.” 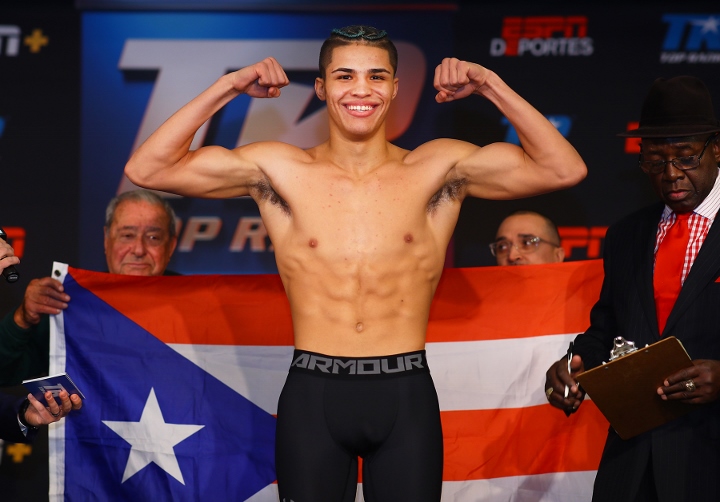 It’s looking like it’s the right one, though. Sure, it’s early on and the time when every hot prospect looks great, but with two fights and two knockout wins lasting a combined three minutes and 12 seconds, along with a charismatic personality and the style that translates into big things down the line, all is going according to plan for the San Juan-born Zayas.

And jeez, the kid is just likeable.

“I love what I do,” he laughs. “Boxing is my passion and I like to keep a smile on every time. A smile brings people happiness, and when they see me smile, they’re like, ‘Oh, he’s enjoying it in there.’ So I always try to keep as happy as I can and enjoy myself every time I step into the ring.”

There’s been plenty to smile about both in and out of the ring. The youngest fighter ever signed by Top Rank has done his job on fight night, and outside the ring, he’s been getting attention few prospects garner. It doesn’t hurt that he’s embracing that end of the business as much as he is the fighting part.

“I enjoy every step of the way,” he said. “I enjoy every interview and it’s fun. I like to tell my story and for people to know my story. I love when (ace publicist) Bernie (Bahrmasel) calls me and tells me, ‘Hey, we’ve got an interview.’ I’m like, ‘Let’s do it.’ I really get excited and I love doing interviews.”

Count Zayas as perhaps the only fighter to ever say that, but let’s not discourage him. Instead, appreciate that he’s in the world’s hardest game, being professional every step of the way, and juggling schoolwork at home in Florida in the midst of his senior year in high school.

“I can separate them (fighting and school) and I have time for both,” he said. “I train in the morning from 8am to 12pm. Then I go home and I’ve got all that time to really get into school. And the teachers are very flexible with me and they help me a lot with my schedule, so I’m really good with that part.”

Even all the tests and term papers?

This Saturday, Zayas makes his third trip to the pro ring when he meets Corey Champion on the Jesse Hart-Joe Smith undercard in Atlantic City. Most expect things to follow the same pattern as they did in Zayas’ first two bouts, and while there are some changes to what he saw as an amateur, it has pretty much been business as usual when it comes to the end result on fight night.

“I wouldn’t say nothing’s been different,” he said. “I believe in the same things – you step in the ring and do your job and stay focused. But yeah, getting in the ring with eight-ounce gloves is a little different than before with 10-ounces and headgear. Now it’s without headgear, so you always have that in your mind. But overall, everything feels the same.”

And when it’s time to glove up and throw hands, the smile fades and it’s off to work.

“I like to listen to music and be by myself and think about what I want to do in the ring,” Zayas said. “And once it comes to fight night, I just try to stay as calm as I can. In the ring, I listen to my corner and follow the game plan. (Overall) I want to take everything step by step. My opportunity’s gonna come. I just gotta stay focused and keep working hard.”

“I like to keep it simple,” he said. “I don’t like to brag about things. I just work hard, put in the maximum effort every time I step into the ring, and get the victory. I think that’s what the fans like most about me. I stay humble and I’m always smiling. I’m just here to do my job and do my job only.”

Your opponent seems to be working fairly hard too. Corey Champion (yes thats his name [url]https://boxrec.com/en/proboxer/888370[/url]) already has his tuneup fight scheduled for late March to regain his confidence after getting knocked out by a 17 year old boy.