Xander Zayas: I Believe Everybody They Put in Front of Me is a Test

Peter Kahn is one of the best managers in the boxing business. Despite this fact, he’s not prone to hyperbole like most of his peers. So when I asked him just how far one of his fighters – Xander Zayas – can go in this sport, his answer was a bit surprising.

“He can be one of the best fighters of all-time if he wants to,” said Kahn. “He has all of the physical attributes, he has the drive and the work ethic, he has the great family support system and he's with the greatest promoter in boxing. So if you have to check boxes to be set up for success, Xander is set up for success. He checks all the boxes.”

All-time. That’s Sugar Ray Robinson, Muhammad Ali, Henry Armstrong territory. Or if we’re sticking to Puerto Rican fighters, Felix Trinidad, Miguel Cotto, Wilfredo Gomez territory. That’s quite a lot to put on an 18-year-old’s plate, unless that 18-year-old is Zayas, who makes his fourth start of 2020 tonight against Anthony Curtiss in Kissimmee, Florida.

“For me, it's all about hard work,” said Zayas when told of his manager’s comment. “I know if I dedicate myself, if I stay focused, if I listen to my parents, to my team, if I take every step correctly, everything is possible and I'm gonna achieve my goals. When I hear something like that, it just makes me hungrier. I want it even more. Now I gotta show people that I'm capable of doing it and that I'm capable of staying focused, and keep working hard.” 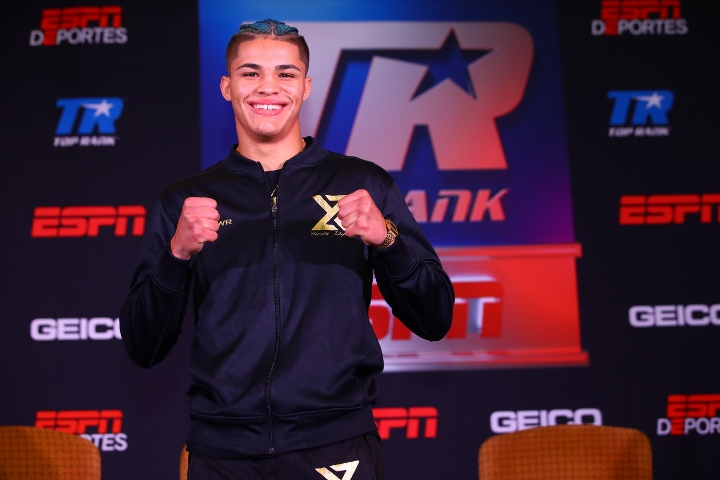 Zayas says all the right things. More importantly, the affable teenager does all the right things now. It’s why hopes are so high for him in the Spring Training of his career. This is the time before every fight is a tough fight, where it’s a 50-50 equation every time he steps between the ropes, so it’s okay to think big and dream bigger. Because if you can’t do that now, you never can.

Already 5-0 with four knockouts, Zayas has looked like the real deal thus far, even if his opposition isn’t exactly world-class. That’s part of the process, and the way the recent high school graduate looks at it, every fight is a test in some form, even his opponents haven’t been able to push him to the limit yet.

And that’s the plan – fight by fight, up the level of competition, get him different looks and focus on the reality that with Zayas just turning 18, there is no rush, no reason to throw him in deep waters he can’t swim in yet.

“The game plan is to keep improving, seeing different things each time he fights, moving at a pace that allows him to continue to improve and continue to grow,” said Kahn. “He's also growing physically, so we're also managing that. Right now, he's a welterweight; I don't know how long he'll remain a welterweight, but we're managing all those things and taking all the opportunities to get all the experience that he can.”

Being on the Top Rank roster is also the perfect place for Zayas to be, because few, if any, promoters know how to move a fighter like they do. As for the impatience of a young man who wants to take over the world, Zayas breaks that stereotype. Sure, he’s like any other 18-year-old outside the ring, but when he’s in the gym or in a fight, he listens to those who have already traveled the roads he’s approaching.

Now you just cross your fingers and hope he never loses that love for the game and that he can make a run at living up to the expectations of his team. At the moment, the odds look to be on his side.