Without Fans, Frampton Expects Fight With Herring To Take Place In U.S.

As much as Carl Frampton would’ve loved to challenge Jamel Herring in Frampton’s hometown of Belfast, Frampton figures their rescheduled clash will take place in the United States.

Herring was supposed to defend his WBO junior lightweight title against Frampton on June 13 at Windsor Park, an outdoor soccer stadium in Northern Ireland’s capital city. Once their fight got delayed due to the COVID-19 pandemic and Herring and Frampton embraced interim bouts, Windsor Park became a less likely option for weather-related reasons.

Herring gladly would’ve fought Frampton before a huge gathering of Frampton’s faithful fans, but if they fight in November, as promoter Bob Arum has suggested, they might meet in a mostly empty venue in the U.S.

“It would be a shame,” Frampton told BoxingScene.com. “It’s a big fight and I think that we could draw a big crowd. But I think that may be an issue. I hope it’s not, but I think, for me, I wanted to box in Belfast simply for the reason to box at Windsor Park. I think that’s past us now. I don’t think that can happen. The weather over here isn’t great, and you can only box outdoors in June, July, August, really. 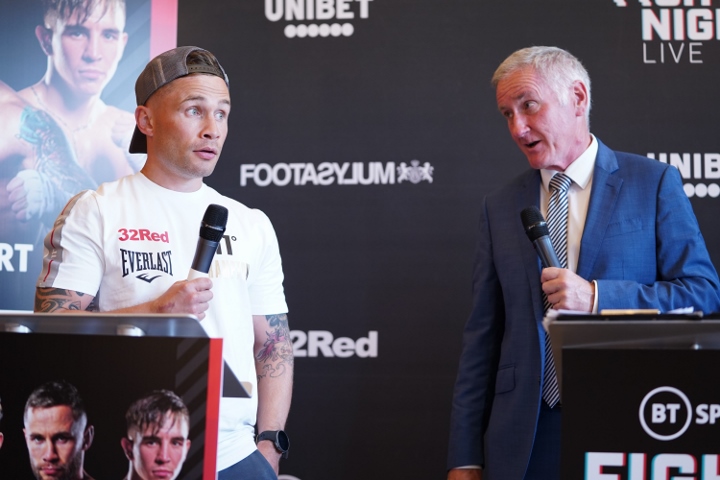 The 33-year-old Frampton (27-2, 15 KOs) must defeat Scotland’s Darren Traynor (16-3, 7 KOs) in a 10-round fight he is heavily favored to win Saturday night in London to secure his shot at Herring’s title. The 34-year-old Herring (21-2, 10 KOs), a U.S. Marine from Coram, New York, also must successfully defend his title against Puerto Rico’s Jonathan Oquendo (31-6, 19 KOs) in an ESPN main event September 5 at MGM Grand Conference Center in Las Vegas.

“Bob said November,” Frampton said. “Obviously, no one knows what’s gonna happen between now and November. But hopefully, we can get the fight done in that sort of time. If we can do it in 2020, that would be ideal. If it has to be 2021, that’s fine, too. It would better for me, I think, and probably better for Jamel, to squeeze it in this year.”

ESPN will televise Frampton-Traynor in the U.S. as the main event of an afternoon telecast Saturday from York Hall (4 p.m. ET/1 p.m. PT). Frampton-Traynor also will headline BT Sport’s telecast in the United Kingdom (8 p.m. BST).

Those two networks will televise Herring-Frampton as well, assuming they win their upcoming bouts.

“I think’s it’s possible wherever opens up to fans,” Frampton said. “So, if it happens in the UK, and the arenas open up and we can fight in the UK, I think then we will do it [in Belfast]. I think that if certain states in America say that they’re gonna allow spectators indoors, then we can do it there as well. So, I just want the fight to happen. But fingers crossed, we have an audience.”