With Canelo Trilogy, Golovkin Gets Closer To Soothing a Tattered Psyche

And if recent suggestions are correct, it’ll be another 172 more.

But regardless of when it occurs, one thing’s for certain:

Gennady Golovkin is looking forward to getting hands on Canelo Alvarez a third time.

When the consensus middleweight champion left the T-Mobile Arena ring after a bout with his cinnamon-haired contemporary in September 2017, he was happy he'd retained his cadre of title belts via split-decision draw but frustrated he'd been denied a win most ringsiders felt he'd earned.

A day short of a year later, in September 2018, it was a familiar feeling for the Kazakh.

Problem was, his post-fight duffel bag was a great deal lighter without the WBA, WBC, IBF and IBO straps he’d arrived with – thanks to matching 115-113 verdicts for Alvarez (seven rounds to five) provided by Steve Weisfeld and Dave Moretti, which overrode the even score tallied by Glenn Feldman.

Both Weisfeld and Moretti scored the 12th round for the winner, who landed 21 punches to Golovkin's 20 in the final three minutes, according to CompuBox.

If either had leaned the other way, the result may have been a second straight draw. 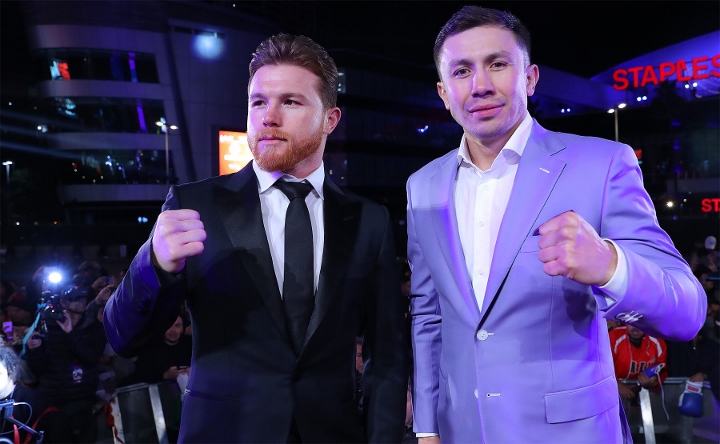 Instead, the threadbare nod in Alvarez's favor revved the enmity that had already developed between the once-amiable foes. The always accessible Golovkin left the ring without a post-fight interview, and the bitterness symbolized by the exit is precisely the kind of accelerant that has since fueled a promotional hype machine perpetually seeking new angles.

A third bout is reportedly on the docket for this September 12, pending success in interim tests for both – Alvarez against Billy Joe Saunders and Golovkin versus Kamil Szeremeta – alongside clearing of a burgeoning logjam of fight cards whose dates have been altered by the coronavirus pandemic.

But even more vital than the resume enhancement would be the sanity restoration.

That’s the feeling of HBO stalwart Jim Lampley, who called both Alvarez-Golovkin bouts for the premium cable giant and believes exorcising the Mexican ghost carries far more weight for Triple-G than titles or pound-for-pound rankings ever could.

“Life and death for his psyche,” Lampley told me. “Not that big for his legacy just because he wouldn't be favored. Great legacy anyway. More important that it be another great fight.”

Indeed, opening odds from BetOnline have labeled Golovkin a +200 proposition for meeting No. 3, meaning a $100 wager on him would yield a $200 profit. Meanwhile, Alvarez is listed as a -260 favorite, which means a $260 outlay is required to return a $100 profit if he caps the trilogy with a second win.

Betting aside, public opinion leaned hard in Golovkin’s favor after each of the first two bouts.

And given that reality, Lampley said, belief will probably remain on his side later this year, too.

“Fact is, even though Canelo has a draw and a win officially, feedback on the web strongly suggests the public believes GGG won both fights,” he said. “Many bad things can happen to a boxing career, but official setbacks in fights fans believe you won is the opposite. The judges have given Gennady a gift: He is a martyr. History shows they only love you more for that.

“I understand why public sentiment registers as it does. Hardest sport to score, and probably 20 of 24 rounds were close. And GGG is one of the most fan-friendly fighters ever. Style, face, garbled English, everything about him. Compelling In the way only the pure attacker can be.”

Presuming all goes as planned, Alvarez and Golovkin will enter airspace reserved for the sport's most recognized pairs and ensure a prominent spot for each on one another's Hall of Fame plaques.

Heavyweight legends Muhammad Ali and Joe Frazier laid much of their career foundations over 41 rounds between 1971 and 1975, while welterweights Ray Leonard and Roberto Duran did the same across three fights from 1980 to 1989. The careers of Arturo Gatti and Micky Ward were defined by three apocalyptic fights through 13 months in 2002 and 2003, and Manny Pacquiao and Juan Manuel Marquez took it a step further, fighting four times at three weights between 2004 and 2012.

Naturally, there's no guarantee a third encounter will rise to those levels.

But given the finesse of their first encounter and the ferocity of their second, it's close to a lock that Alvarez and Golovkin – who combined to throw more than 1,500 punches – will find something worthwhile to offer the paying customers.

[QUOTE=ruedboy;20482018]Fielding-Jacobs-Kovalev! Rising Star??? A paper champ, a GGG leftover and a shot alcoholic? The diva ducked a legacy, trilogy fight for that trio? LOL Great hype - BS fights[/QUOTE] well he waited for ggg to age and fought liam smith,…

[QUOTE=EDDIE SPERM;20485406]Your fraud did vs Steve Rolls, Vanes instead undefeated Derev & now Kamil Szeremeta LMAO[/QUOTE] Oh GGG is a fraud but I have the knowledge and balls to admit it but you fawktards can’t do the same y’all are…

[QUOTE=BIGPOPPAPUMP;20479955]By Lyle Fitzsimmons - It's already been 556 days. And if recent suggestions are correct, it'll be another 172 more. But regardless of when it occurs, one thing's for certain: Gennady[B][U] Golovkin is looking forward to getting hands on Canelo…

[QUOTE=Chuckguy;20482019]Conelo has been stealing money for years with his bs cw fights and calculated risk fights same sh it your lover floyd did for most of his career. Take their dicks out of your mouth and ass hole before posting[/QUOTE]…

[QUOTE=ShoulderRoll;20481569]How is Canelo stealing money? He has been the only thing keeping DAZN USA afloat. People actually watch his fights. GGG on the other hand? No one is getting excited for no Steve Rolls or Kamil Szeremeta. Think before you…