There weren’t any knockdowns in the bout, but Zepeda’s relentless pressure left Ramirez unable to defend himself, forcing referee Ray Corona to intervene at 2:43 of round five. 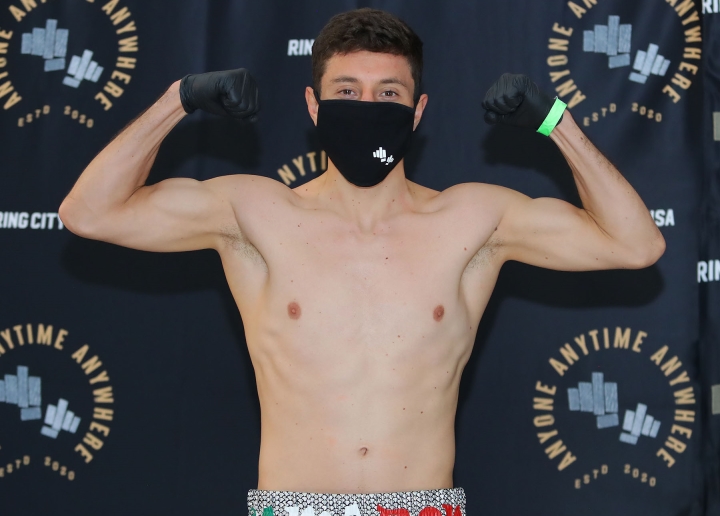 Zepeda dictated the pace, shooting his straight left hands at his taller target. Ramirez did his best work early in the fight, scoring with right hands to the body and managing to counter his relentless opponent.

The tide turned for good in round three, with Zepeda landing left hands upstairs and also targeting Ramirez’s midsection. The drastic momentum shift proved concerning to Ramirez’s corner, urging their charge to tighten up his defense as to avoid taking unnecessary punishment.

Zepeda mixed in an uppercut in round four, catching Ramirez on the inside. Ramirez sought to establish distance between the two and putting his height and reach advantage to use. It didn’t quite take as Zepeda effectively cut off the ring, digging in with hard left hands and often cornering Ramirez whose punch output dramatically decreased in round five.

It came at the very wrong time for the 27-year old Tijuana native, who was no longer able to keep Zepeda at bay. His brief break in punishment came in the form of his mouthpiece getting dislodged. Time was called to reinsert it, only for Zepeda to dial up his attack. Ramirez (23-3-1, 16KOs) lost his mouthpiece again, only for a lull to never come in order to cease action.

Instead, Zepeda intensified his offensive output, landing left hands and right hooks until Ramirez’s corner urged the referee to intervene.

Zepeda improves to 22-0 (20KOs) with the win, coming in his U.S. debut. Ramirez snaps an 11-fight unbeaten streak in suffering his first loss since a 2nd round knockout to current welterweight contender Abel Ramos in June 2015.

The bout served as the chief support to a junior lightweight crossroads clash between O’Shaquie Foster (17-2, 10KOs) and Miguel Román (62-13, 47KOs).

This was a pretty good card overall. It was nice seeing these fights happening near my hometown. Kudos to Roach for having this event at his place.