Heavyweight contender Tyson Fury has promised to score a knockout victory this coming Saturday night, when he faces WBC world champion Deontay Wilder at the MGM Grand in Las Vegas.

Fury and Wilder fought to a controversial twelve round split draw in December 2018, at the Staples Center in Los Angeles.

Fury now wants to avoid any possibility of the contest heading to the judges. 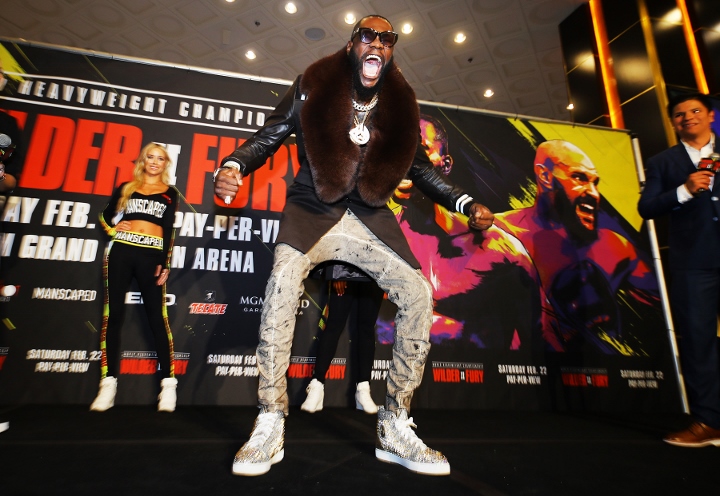 But Wilder, by far, is the puncher in the contest. In his 42 wins, Wilder has scored 41 knockouts. Two opponents went the distance. The first was Bermane Stiverne in 2015. Stiverne was knocked out cold in one round in their 2018 rematch. The other opponent to last the distance was Fury - and he was nearly knocked out in the twelfth and final round of the first encounter.

Wilder has laughed at Fury's threat of a knockout victory - explaining that the Gypsy King is not really a big hitter. Fury went the full twelve round distance in his last fight with Otto Wallin back in September.

"Fury, like I have said before, has got pillows as fists," Wilder told Sky Sports News.

"That's why I was able to continue applying pressure on him [in the last fight]. We all know that Fury can't punch.

"The numbers don't lie, we can see that my two-year-old punches harder than him. I don't believe anything he's saying. Fighters have to have certain strategies and tactics when approaching a fight. Sometimes you have to manipulate people - and he's trying to get them to believe something even he doesn't."

[QUOTE=REDEEMER;20428441]You are lying as always you said you were the smartest guy and it’s not even close this is what happens to liars they can’t remember what they post and this is just added to the list . Here’s a…

[QUOTE=Marchegiano;20421645]When did I claim to be the smartest guy? You're just insecure. I claim to know the most and have the highest credentials. The fact that you take that as "Me am smarter than you" just means you're a sally,…

[QUOTE=Marchegiano;20412117]That's a rabbit. I didn't even notice live, but, that's a clear as **** rabbit. Point still remains bro. I was wrong, Fury has the balls to punch after all.[/QUOTE] You claim to be the smartest guy on the forum…

[QUOTE=Marchegiano;20401809]Denium just posted Wilder taking a single step back....y'all are deluded. How many steps back does Fury take at the same time even though he's not even being hit? Was he retreating before Wilder even? Hmmm....must have gotten hurt by…