Wilder Shoots Down Idea of Being Named WBC Franchise Champ

Let’s be clear—Deontay Wilder would rather lose a title in the ring than have one awarded to him in a board room. (photo by Ryan Hafaey)

The unbeaten heavyweight is coming up on five years as the reigning World Boxing Council (WBC) titlist, an anniversary date which will only remain intact should he get past Luis Ortiz in their upcoming rematch later this month. With the sanctioning body’s creation of the “WBC Franchise” title comes the safety net of not having to lose a belt in the ring or even abide by the organization’s rules as it relates to honoring mandatory challenger obligations.

To date, Saul ‘Canelo’ Alvarez and Vasiliy Lomachenko have accepted such honors as WBC Franchise champions at middleweight and lightweight, respectively. There came heavy speculation that with a repeat win over Ortiz (31-1, 26KOs; 2NCs) would come such distinction at heavyweight, which the sport’s longest-reigning active WBC titlist has immediately resisted.

“Many people ask me about the franchise belt. I don’t know much about it,” Wilder (41-0-1, 40KOs) noted during a media workout session at his training facility in Northport, Alabama while preparing for his rematch with Ortiz, which headlines a Nov. 23 Fox Sports Pay-Per-View from MGM Grand Garden Arena in Las Vegas, Nevada. “What I’m hearing, it allows you to stay a champion, you don’t have to fight mandatories and stuff like that. If that’s the case, I’m not interested.

“I want the mandatories. Guys work their way up, work hard to get to number two, and then become a mandatory. Why would you crown someone that doesn’t have to have mandatories?” 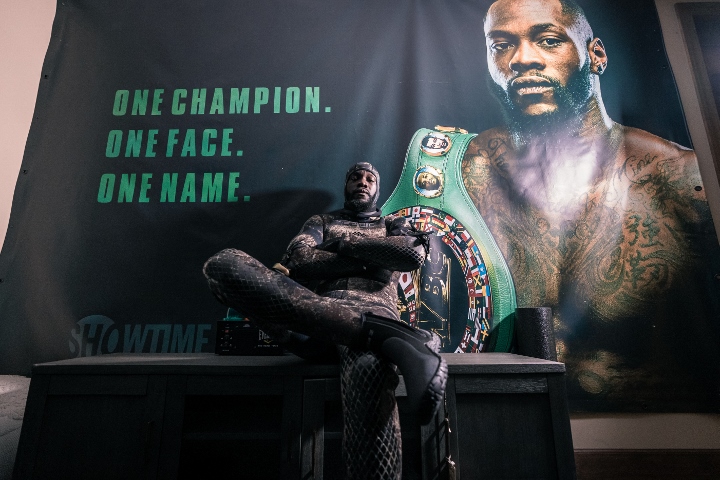 Wilder will attempt the 10th defense of the title he claimed in a Jan. 2015 points win over Bermane Stiverne, having scored a 1st round knockout in their Nov. 2017 rematch among nine previous defenses. Their sequel came about as ordered by the WBC—albeit as a replacement opponent when his first fight with Ortiz was rescheduled. Wilder also satisfied his mandatory obligation in his most recent outing, a 1st round knockout of California’s Dominic Breazeale. The buildup was far more contentious than the fight itself, with the two having deep rooted history which bubbled over from the moment the fight was formally announced.

“I love having mandatories, him having to sit, having to wait,” Wilder says of the process. “He get frustrated and then when the fight comes, you have me waiting all this time already. There’s always that buildup to thee fight. When you take that away, you take certain things away from boxing, you take the charisma away, you take the excitement away from it.

“That’s what I don’t want to do. I don’t want to take the excitement away from anyone. I’m a dangerous fighter, I have a devastating right hand. That’s all I’ve been doing my whole career, giving fans what they want to see, giving them devastating knockouts.”

Of course, Wilder can still bring that level of excitement into the ring no matter what title is at stake. Still, he likes the feeling of hoising an actual title above his head after each win, rather than being symbolized as a champion.

The distinction for Mexico’s Alvarez (53-1-2, 36KOs) allowed him to look elsewhere for his latest fight—moving up two weight divisions to knock out Sergey Kovalev for a light heavyweight title just last weekend—and leaves him obligation-free for his next ring adventure, at least as it relates to his status as World middleweight champion. The decision elevated Jermall Charlo from interim to full titlist in the process.

In the case of Ukraine’s Lomachenko (14-1, 10KOs), promotional outfit Top Rank Inc. specifically petitioned the WBC to bestow the Franchise title status upon the two-time Olympic Gold medalist and reigning three-belt lightweight titlist. The request came during the WBC annual convention in Cancun, despite erroneous reports from other outlets claiming the 31-year old southpaw was stripped of his title.

The ruling created a path for Lomachenko to accept any fight he wishes while angling for the winner of the Dec. 14 title fight between IBF lightweight title claimant Richard Commey (29-2, 26KOs) and unbeaten mandatory challenger Teofimo Lopez (14-0, 11KOs). No longer factored into the equation is having to honor a mandatory defense versus then-WBC interim titlist Devin Haney (23-0, 15KOs), who—similar to Charlo—received email notification of his newfound status as a full beltholder.

“Hopefully, nothing comes my way about a franchise belt,” notes Wilder. “I don’t have nothing against guys that have taken it. I’m just listening to the fans and listening to my heart. I don’t think being a Franchise campion would fit me.

“If they want to give someone else that belt over mem, then I’m fine with that.”

[QUOTE=juggernaut666;20173296]He never fought Povetkin and avoided him ,he was cleared to fight and won that court case . Technically theres a lot of things we can bring up about Wilder but its all the same old same old of a…

[QUOTE=factsarenice;20173162]He refused White and will continue to refuse White, that's a fact.[/QUOTE] Whyte is a bum....Wilder is gonna Knock him easily

[QUOTE=kushking;20172313]The franchise belt is some bs. But of course its more bs in certain cases over others. Canelo at least had the excuse that he wants to fight for titles at multiple weights & just like fmj used to be,hes…

[QUOTE=factsarenice;20173161]Wilder doesn't need a Franchise belt, the WBC only picks tomato cans for his Mandatory.[/QUOTE] You mentioned earlier that White (but infact Whyte) was Mando and if i believe you for a moment on these statement than Whyte is a…

[QUOTE=REDEEMER;20172378]Wilder has only fought two mandatories so it doesn't effect him anyway, he's conning you guys again and are taking the bait. Ha Wilder dictates who his mandos are as well he even got Stiverne as a second one and…