With two more programs related to the heavyweight title fight rematch between Deontay Wilder and Luis Ortiz come as many viewership records established by Fox Sports.

The fourth and final installment of Wilder vs. Ortiz: PBC Fight Camp—which aired Sunday on Fox prime in conjunction with coverage of the Fox National Football League (NFL) Game of the Week—averaged a series best 2.438 million viewers according to Nielsen Media Research. The segment—which chronicled the final stages of training camp for both participants ahead of their Nov. 23 rematch, which airs live on Fox Sports Pay-Per-View from the MGM Grand Garden Arena in Las Vegas, Nevada—immediately followed Fox’s live NFL coverage in most markets, while preceding the event in the remaining coverage areas.

Not only did the episode surpass its own series mark, but according to Nielsen research also served as the most-watched NFL-adjacent program since 2015. 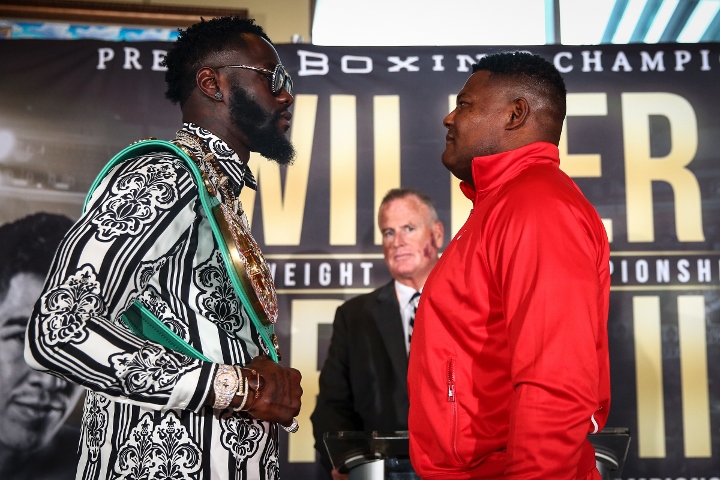 The final Fight Camp segment was paired with a special Sunday afternoon edition of Inside PBC Boxing, which also set a series benchmark. The Fox prime-aired hour-long boxing insider show drew an averaged 1.344 million viewers, making it the most watched episode of the series, which is coming up on its one-year anniversary in December.

Of course, it’s now up to the chief principles to deliver in the ring.

Alabama’s Wilder (41-0-1, 40KOs) attempts the 10th defense of his heavyweight crown in a rematch with Ortiz (31-1, 26KOs; 2NCs), a Miami-based Cuban southpaw who gave the reigning titlist all sorts of hell in their March 2018 encounter. Wilder dropped Ortiz in the 5th round but was badly buzzed two rounds later. The 2008 Olympic Bronze medalist and boxing’s long-reigning alphabet titlist survived the scare to drop Ortiz twice more in finally putting him away in the 10th round of their Showtime-headlining thriller.

Reports have surfaced of rumored slow ticket sales surrounding Saturday’s rematch, but interest hasn’t all waned among home viewers in the buildup to the event. The Nov. 9 edition of PBC Countdown: Wilder vs Ortiz 2 drew 686,000 viewers—with the near-midnight slotted segment serving as the most watched Countdown show of 2019. It also landed as the second-most watched PBC Countdown show ever, trailing only the series launch last December featuring separate title fights involving twins Jermall and Jermell Charlo.

All of it points to a positive trend in the continued efforts by Fox Sports in presenting its boxing coverage. A similarly aggressive marketing strategy was provided for each of the two Fox Sports PPV events headlined by unbeaten welterweight titlist Errol Spence ,with wins over Mikey Garcia at the Dallas Cowboys’ AT&T Stadium in Arlrington, Texas and Shawn Porter at Los Angeles’ famed Staples Center both enjoying respectable box office numbers.

[QUOTE=Toffee;20208156]A beaten man, ladies and gentlemen. Go read the thread. My post is exactly how it happened. I should really charge you for taking you lessons like this.[/QUOTE] Lmao... yeah the audience in your head believes that bro. The ones…

[QUOTE=Fire4231;20208097]Sigh... posture but the written record is permanent. You can assist your ego by reengineering your original questions and distorting my answers but it’s all here. Not fooling anyone we all can read. Beat it clown, we see straight through…

[QUOTE=Toffee;20206684]So let's run this right the way back to where we started... You claimed Ortiz was possibly the number two heavyweight in the world. I asked you to name the win that gives him that kind of standing. You said...…

[QUOTE=Fire4231;20206645]Old wins count for legacy. Current rankings are a what have you done for me lately. Having one or two big wins doesn’t afford you a life time at the top. [/QUOTE] So let's run this right the way back…

[QUOTE=Toffee;20199976]I'm happy to accept your arguments on Fury, Whyte, and the one you don't discuss (Ruiz, the unified champion). You're pretty clearly wrong, but let's just roll with it. You have Ortiz ahead of AJ because he lost a fight.…