Deontay Wilder made the executive decision to rematch Luis Ortiz in order to remain any lingering doubt from their first fight 22 months ago. The insistence on the part of the unbeaten heavyweight titlist is that he will make things easier on himself this time around.

The oddsmakers are inclined to agree.

Sportsbook BetOnline.ag has Alabama’s Wilder (41-0-1, 40KOs) as a healthy 6-1 favor to score a repeat win over Miami’s Ortiz (31-1, 26KOs; 2NCs), whom he stopped in the 10th round of their instant classic last March in Brooklyn, New York. Wilder scored three knockdowns on the night but had to endure a hellacious 7th round in order to cross the finish line and defend his title for the 7th time. He’s since added two more successful defenses—a 12-round draw with England’s Tyson Fury and a 1st round knockout of Dominic Breazeale in May.

“Ortiz has had three comfortable, but hardly spectacular wins since their first fight,” Adam Burns, sportsbook manager for BetOnline.ag noted to BoxingScene.com. “He is much leaner now than their last fight where he gassed after causing Wilder the first real trouble in his career in the 7th round.

“However, he is 40 now and in with the biggest puncher in the division.” 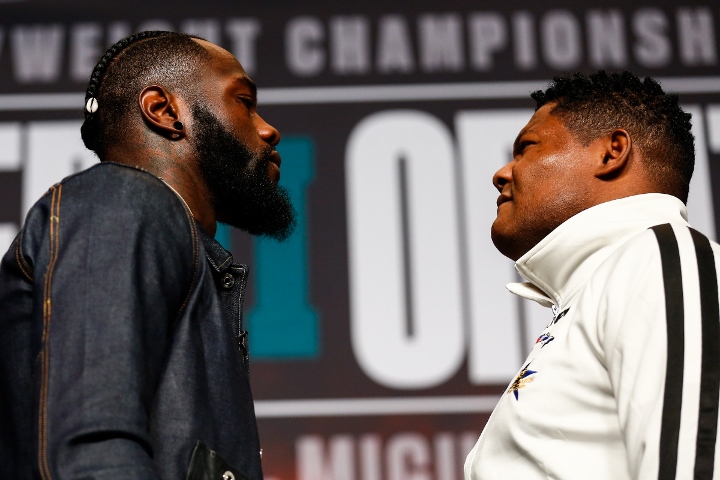 A win on Saturday gives Wilder his 10th successful defense, marking just the fifth heavyweight titlist in history to accomplish that feat. The sense is that the 34-year old boxer won’t have to struggle against his repeat challenger six years his senior—and to once again do so inside the distance. Betting props have odds at -600 that the fight doesn’t go to the scorecards, with Wilder installed as a 13/4 favorite (-325) to end the fight inside the distance, with the closest round props at 8/1 for the reigning heavyweight titlist to knock out Ortiz in either rounds five or six.

Ortiz isn’t any closer than 50/1 to win in any particular round, but odds are just at 4/1 for the 40-year old Cuban southpaw to win the fight by decision, while Wilder is at 6/1 to pick up just his second career points win.

Bettors can get in on 16/1 odds for Wilder to truly repeat the first fight and stop Ortiz in the 10th round. Clearly, the sportsbooks don’t expect it to go that far, with the closest odds placed rounds three through nine.

“Wilder is already the most dangerous heavyweight -  who is also improving the most,” notes Burns. “He will know Ortiz out-boxed him comfortably on the counter punch last time out.

“This is a fight that could go deep in to the championship rounds or be over in two minutes, and even with Ortiz experience (amateur record of 343-19) it’s hard to see any other outcome than a Wilder win by KO.”

[QUOTE=daggum;20203251]ortiz turned down more than 5 million dollars to take 1.5 million to fight wilder? what is his fight-lose bonus? inquiring minds want to know[/QUOTE] You would guess Ortiz's diving bonus will be the difference of $3.5m. But wasn't it…

ortiz turned down more than 5 million dollars to take 1.5 million to fight wilder? what is his fight-lose bonus? inquiring minds want to know

[QUOTE=_Maxi;20202505]If Ortiz pays well you might as well bet on him.[/QUOTE] Agreed! I (like most) am expecting Wilder to win but Ortiz has power of his own and pretty good timing. He definitely has a chance. Take the odds!

If Ortiz pays well you might as well bet on him.