Wilder: Molina Might Be 'Bipolar,' But Has Heart to Upset Joshua

Wilder knocked out Molina in the ninth round of their June 2015 fight for Wilder’s WBC heavyweight title. Since then, Wilder recalls reading and hearing that Molina complimented him following their fight.

“That’s weird,” Wilder told BoxingScene.com. “I guess he’s getting bipolar now, because all he’s been talking about is how I’m a dangerous fighter and how I’m the hardest-hitting fighter in the business, stuff like that. And now somebody’s better. But, you know, whatever. To each his own.” 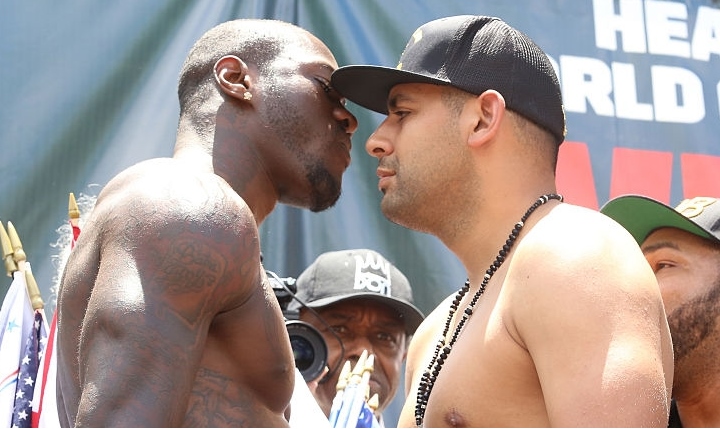 Despite what Wilder considered disrespect from Molina (25-3, 19 KOs), he still believes Molina can shock the boxing world Saturday by upsetting the heavily favored Joshua (17-0, 17 KOs) in Manchester, England (Showtime; 5:30 p.m. ET/2:30 p.m. PT). The 6-foot-4, 230-pound Molina, of Weslaco, Texas, buzzed Wilder with a left hook in the third round of their fight and knocked out 39-year-old former heavyweight contender Tomasz Adamek (50-5, 30 KOs) in the 10th round of his last fight, April 2 in Krakow, Poland.

“Of course I think he can win,” Wilder said. “He has the heart and the will, and that’s all you need. People say skills pay bills, but I don’t believe in that. I’ve done beaten a lot of guys with more skills than me throughout my career, amateur-wise and coming up. I don’t believe that skills pay bills. I believe in that will and determination of a person, and their heart. That’s what wins fights.”

The 31-year-old Wilder (37-0, 36 KOs) feels Joshua, a heavyweight rival he hopes to fight, has feasted upon “D-level opposition” since the 27-year-old title-holder turned pro three years ago and benefited from an extremely supportive public in the United Kingdom. The 2012 Olympic gold medalist has knocked out each of his 17 professional opponents, though, including dominant performances against previously undefeated Dominic Breazeale (17-1, 15 KOs) and former IBF champ Charles Martin (23-1-1, 21 KOs) in his past two fights.

“I definitely think this fight could be a late-round stoppage or a decision,” said Wilder, who will provide analysis for Showtime’s broadcast of Joshua-Molina. “It’s got the potential for going the distance or being stopped in the late rounds, in my opinion. So we’ll see how it goes. Being that Molina has fought me, one of the best, one of the hardest hitters in the division for sure – that’s a fact – we’ll see how it goes.

“You know, Joshua’s not a flexible guy. Anybody that has head movement and can throw angles at him, it’s gonna be an easy win for them. But it’s gonna be up to Molina, to see what he’s gonna do.”

Joshua is better in your eyes...To me he looks like a plodder, with no headmovement, that has fought petty competition, who also would get ktfo if he fought someone with as much power, height and reach as he does..hmm kinda…

Wilder is correct...AJ is too stiff and will have problems against movers as he did in the ams.

Molina aint gonna upset AJ. AJ will be upset when he get Molina blood on his shorts. Who gonna pay for dry cleaning.

Damn Wilder got some haters out here boy. What is the man supposed to say? Yall tell me.