Wilder: Joshua is a Coward - He Knows This, His Team Knows This

WBC heavyweight champion Deontay Wilder labelled Britain's Anthony Joshua a "coward" for failing to secure a bout between the two, hours before the American then clashed with upcoming opponent Tyson Fury at a news conference on Monday.

Joshua's promotion team Matchroom Boxing did not immediately respond for comment by email or phone. Wilder and Fury began their promotional tour in London for their December 1 fight in Los Angeles with a possible bout against IBF, WBA, IBO and WBO holder Joshua in 2019 up for grabs.

Joshua was in negotiations with Wilder's team earlier this year to organise a fight which would have presented the opportunity for either man to become undisputed heavyweight champion of the world. 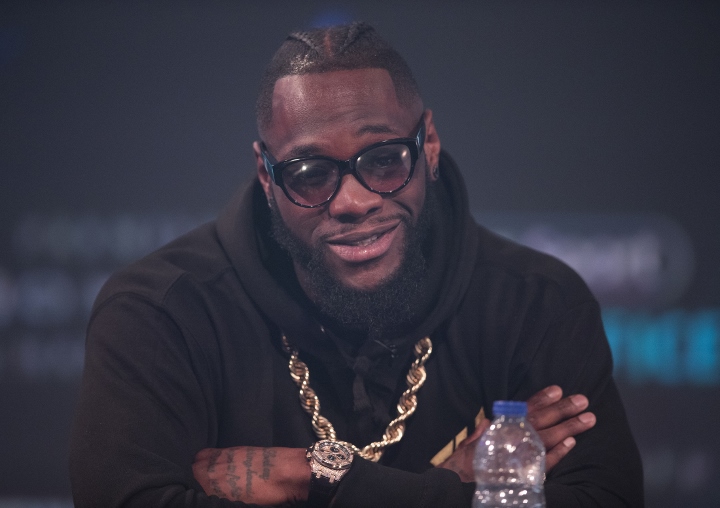 However, talks fell through with both sides blaming the other for the breakdown. Joshua instead fought and knocked out Russian Alexander Povetkin at Wembley Stadium last month which took him to 22 fights unbeaten. Hours earlier, however, Wilder and Fury had somewhat stolen the limelight by announcing their match.

"Hey Joshua, me and Fury have got this thing going on to see who is the biggest and baddest in the world, to see who is champion, one face, one name, something you was too coward to do," Wilder said on ITV's Good Morning Britain on Monday.

"You was a coward, and you know this, your team knows this. Every last one of you saying things over again, you manipulated it, you conjugated it. (You are) Compulsive liars."

Later on Monday, Wilder and Fury, both of whom also boast unbeaten records, had to be separated at a news conference after squaring up to each other. Fury, 30, himself a former heavyweight champion, has fought once since returning to the ring after two and a half years following a doping ban. He beat Italian Francesco Pianeta on points in August.

"I am savouring nothing, the only thing I am savouring is smashing Wilder's teeth in," Fury told the news conference. "All the press are here to see the biggest fight of our generation, you are in for a treat."

[QUOTE=Cool Scant;19293341]I hope you’re not dumb enough to believe something without proof. I don’t think so brits just play dumb.[/QUOTE] Sorry there is nothing I can do for you.

I've know this from day 1. I saw it the minute this stiff stoic fool began to talk.

[QUOTE=Laligalaliga;19291652]If you are dumb enough to not know the numbers, so be it. We have moved past that level.[/QUOTE] I hope you’re not dumb enough to believe something without proof. I don’t think so brits just play dumb.

[QUOTE=Cool Scant;19291431]Simple Maths? Based on what numbers? Hearn is a fraud. Checkmate![/QUOTE] If you are dumb enough to not know the numbers, so be it. We have moved past that level.