Deontay Wilder thinks the abrupt move is a sign that he’s already won the mental warfare with his British opponent.

“He’s concerned and worried.I see that he’s nervous when I look into his eyes,” Wilder told BoxingScene.com in an interview. “Let’s face it, when you don’t know how you got dropped to the ground, or how you got up because you were so badly concussed, it’s a problem. It’s always in the back of your mind, like, this could happen again … and that’s why he switched trainers.” 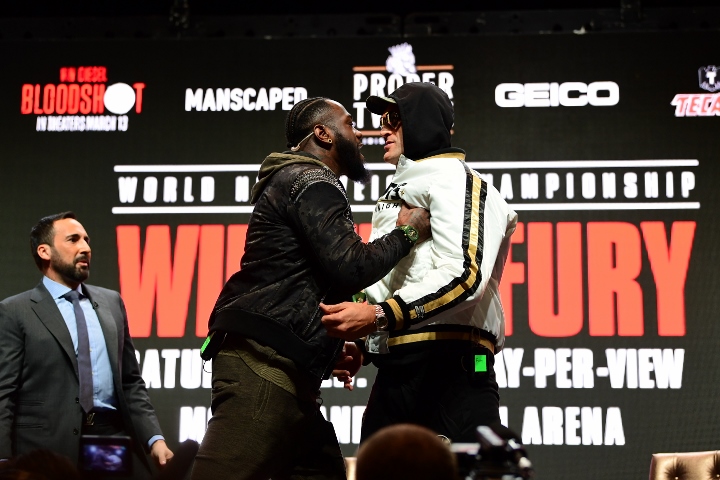 Wilder (42-0-1, 41 KOs) meets Fury (29-0-1, 20 KOs) on Saturday in a highly anticipated heavyweight showdown at the MGM Grand in Las Vegas as part of a Fox Sports and ESPN pay-per-view promotion.

Fury has been notorious for switching the voices in his corner. In the first fight against Wilder in 2008, in addition to Davison, he also had the likes of Ricky Hatton and Freddie Roach in his corner on fight night.

Steward is the nephew and disciple of the late great Hall of Fame trainer Emmanuel Steward. Fury and Steward will look to additionally tap into the Kronk Gym mystique by also joining forces with former world champion Andy Lee, who was trained by Emmanuel his entire career.

“Fury’s using the fact that he won some rounds in the first fight to build confidence in himself to be able to prepare for this fight,” said Wilder. “It’s not going to happen.”

[QUOTE=Oshio;20403624]Bayless is waiving the match off once Fury goes down. There's no way he's going to count to 5 before he waves it off[/QUOTE] I don't think so

[QUOTE=Oshio;20403624]Bayless is waiving the match off once Fury goes down. There's no way he's going to count to 5 before he waves it off[/QUOTE] I hope the instant furys back touches canvas, bayless waves his arms, no more.

[QUOTE=vitali1999;20403447]Yes he's gonna wait on one shot and if he gets it, he's worried Fury will rise again. I see no reason why he won't if Wilder does land a bomb[/QUOTE] Bayless is waiving the match off once Fury goes…

Wilder always plays deflectorama... and this is no exception. He knows good and well this is a 50/50 fight. And he knows he has hit a wall, and Fury seems to improve. No predictions here because of the size and…

[QUOTE=REDEEMER;20403133]Fury views Wilder as an easy fight it’s why he had Warren call Finkle ,he saw and still sees him as easy pickings. Fury already had a rematch clause in place in case he lost due to only 6 months…