A rematch between Tyson Fury and WBC champion Deontay Wilder could take place in the United States in the first half of this year, promoter Frank Warren said on Friday.

Wilder and Fury fought to a thrilling, but controversial, split decision draw at the Staples Center in Los Angeles last month.

"We're trying to make that fight at the moment, everyone wants the fight and most importantly the fighters want it," Warren told ESPN. "The venue is looking like the U.S., that's where the money is. Tyson was disappointed with the judging with the last fight, as I was, so a lot of things need to be sorted but the U.S. is where they want it, probably in the second quarter." 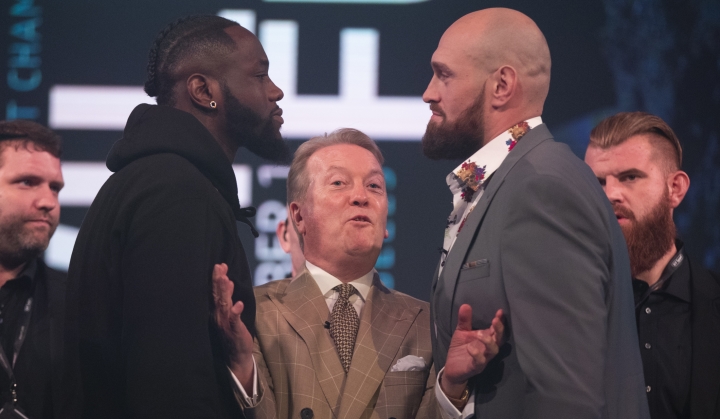 Warren said Las Vegas would be an option but appeared to rule out a return to Los Angeles.

"I wouldn't want to go back to California, I didn't like working with the Californian commission and there were a lot of things we didn't like there," he said.

Fury's bout with Wilder was only his third since a two-and-a-half year absence from the sport following mental health issues and a failed drug test.

Anthony Joshua, who holds the WBA, IBF, WBO and IBO heavyweight belts, is trying to get a unification bout with Wilder.

Warren indicated that Joshua's promoter Eddie Hearn was in no hurry for that to happen, however.

"Joshua will fight Dillian Whyte, or Jarrell Miller next. We all know that," he said. "We're not complicated, Tyson is the most uncomplicated person you will meet, and he will fight anyone. He went to Germany to fight Wladimir Klitschko and he went to America to fight Wilder.

"It's Barry and Eddie Hearn's agenda that complicates it. Joshua is their cash cow and they want to keep milking it," he said of the prospects of a Fury-Joshua fight.

Joshua is due to fight next at Wembley Stadium on April 13 against an as-yet unnamed opponent.

[QUOTE=WBC WBA IBF;19427879]Robbie is by far the worst poster on this site and the site would benefit greatly by his departure.[/QUOTE] A bit harsh . Dont agree with much he says but he's a boxing fan and this site is…

[QUOTE=KTFOKING;19424179]You paying for all of them (Pac/Broner, Spence/Garcia and Crawford/Khan)? Now that I can order through the SHO app, probably will get Pac/Broner since I will be out of town. Spence/Garcia is a for sure buy, and I'm contemplating Crawford/Khan...But…

[QUOTE=WBC WBA IBF;19427879]Robbie is by far the worst poster on this site and the site would benefit greatly by his departure.[/QUOTE] I agree. This forum is a joke now and could use a huge purge.

[QUOTE=Robbie Barrett;19424708]MCC has spent a lot of time on his account and is constantly on here. He won't want to lose credit not paying. You're a part time casual.[/QUOTE] I’ve been on the forum a lot longer than you have.…

[QUOTE=.Mik.;19426015]Why does anyone care who you are and why do you want less people posting on these forums? Stop being weird.[/QUOTE] Robbie is by far the worst poster on this site and the site would benefit greatly by his departure.