By Duncan Robinson, courtesy of The Daily Star

TYSON FURY called out Anthony Joshua after his memorable draw with Deontay Wilder in Los Angeles.

In what will surely be remembered as one of the best fights in recent memory, Fury showed that his time away from the ring has not hindered him.

From the start of the contest at the Staples Center, Fury looked assured and composed, winning most rounds on the experts scorecards. 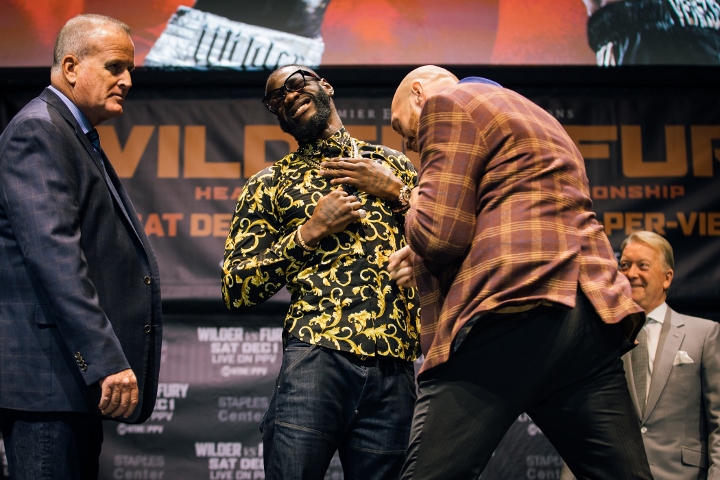 It seemed certain that Fury was set to win back the world heavyweight title but two knockdowns by Wilder seemingly swayed the judges final decision.

Fury was dropped to the canvas twice by Wilder - once in the ninth and one in the final round - but got up both times to fight on.

Speaking after the bout, Fury was adamant that he had won the fight and said that a rematch would happen in the future.

But he was quick to call out Anthony Joshua, claiming that himself and Wilder were the best two heavyweights in the world.

“There's another certain heavyweight out there,” before doing a chicken impression trying to aggrieve Joshua.

“Chicken! Chicken! Joshua, where are you?” Fury shouted.

Wilder agreed with Fury, explaining that “I 100% agree with that. We're the two best in the world, and we proved it tonight, you know. You put two warriors in the ring, that want to put on a show for the fans, you get a great fight.

[QUOTE=Noelanthony;19325186]Funny enough I wasn’t actually wondering!However, now you mention it Joshua was dropped but came back to finish Klitschko in the 11th. Fury was knocked down in the 9th and came back in the 10th and boxed Wilders ears off…

[QUOTE=Noelanthony;19324705]Wilder fans reflecting on a possible reason what went wrong.LMAO P.s At least your are honourable in defeat ( sorry draw) 1 hour run and 5000 boxing have created new accounts[/QUOTE]I know you Brits are wondering why your guys keep…