According to Wilder, all of the offers were below market value, and Joshua rejected an even higher offer of $50 million for the fight.

Wilder is back in the ring on Saturday night, when he faces mandatory challenger Dominic Breazeale at the Barclays Center in Brooklyn, New York. 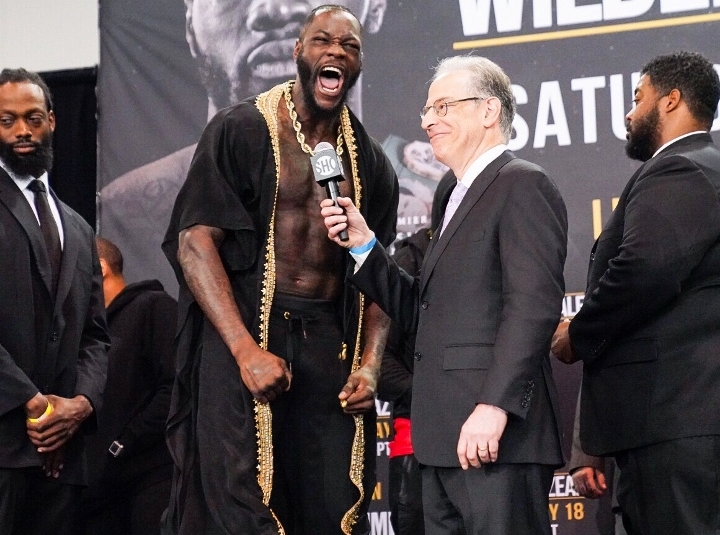 Joshua will defend his titles against Andy Ruiz on June 1 at Madison Square Garden in New York City.

He believes the fight is so big that it's going to be worth a $100 million purse when they collide.

"Most definitely [it's worth $100 million]. We know the magnitude of the fight. ‘The heavyweight division is so exciting now, the money is so huge in the sport right now. It’s one thing to watch fighters and know what they’re capable of doing, but the whole business side is another thing. That’s why I appreciate Shelly and my team trying to explain certain things to me, because sometimes it gets complicated for me to even explain. They’ve been in it for over 30 years," Wilder said.

‘Shelly and Al [Haymon], together combined, have been in it for over 60 years. So why would they not know the route to go? They know what it takes, they’ve had all the champions before. They know how to take a fighter to the next level and to the top and you’ve got to trust in the people that have the years of experience over anyone."

According to Wilder's co-manager Shelly Finkel, the unification will increase in value - indicating how Joshua and his handlers have raised their offers quite handily over the course of a few short months.

[QUOTE=Sid-Knee;19770117]When you see me post, AMERICANS like you are talking shlt. But the idiots are always exposed. Aren't they? I caught you out with you accusing Hearn of being a liar amongst other things. It's OK taking a loss. Just…

[QUOTE=john l;19769759]Lmao you keep quoting me even though I have not answered your last couple and this one is from almost a week ago!!!Get a girlfriend(or just a friend)and a job and move out of mommy place and leave me…

Dazn is learning the hard way about overpaying guys. $100 Million to make the fight. Good business by team Wilder. He will get close to it.