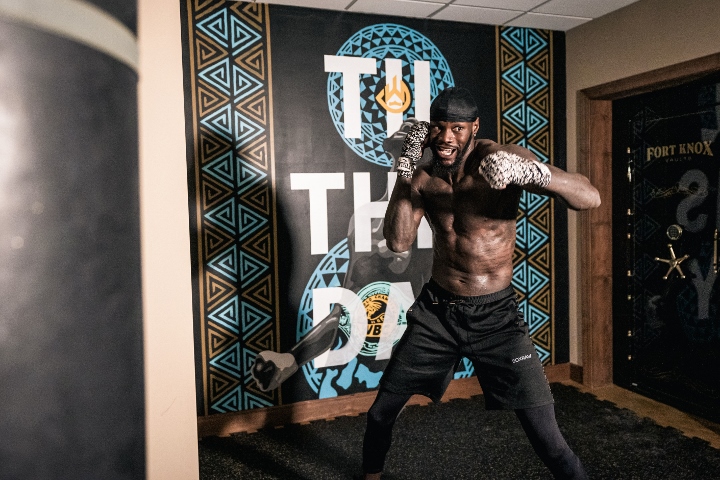 Recently, Wilder showed his talents in front of the camera filming the fight commercial for his highly anticipated showdown.

Even with the big fight commitments, Wilder has flourished during training camp in Tuscaloosa, Alabama as he prepares to be primed when the first bell rings on November 23.

"Camp has been going amazing," said Wilder. "I haven't reached my full potential or peaked in camp yet. We're still pressing and everything is moving smoothly and on schedule. I'm feeling good and I'm looking good as well.

"I'm working on throwing a lot of jabs and countering. I know that Ortiz likes to counter as well. I've been in there with him before. I understand what he wants to do and I can recognize certain weaknesses we're looking to exploit. It's going to be a good fight while it lasts. Everyone knows what to expect from Deontay Wilder. I don't have time to play games and I don't get paid for overtime."

Always one to find ways to push his training and his overall physical fitness level, Wilder has incorporated swimming and scuba diving into his conditioning program.

"For those that don't know, I'm a certified scuba diver," said Wilder. "I enjoy it and I've been doing it for a few years now. It gives me relaxation and helps keep pressure off the muscles in my body. It helps my body tremendously. It's also strengthening my legs and expanding my lungs so that I have more stamina. Water is great for exercise and I love it."

[QUOTE=Boxing Hero;20143842]I'm not the biggest Matchroom fan, but they gain nothing for fighting Luis Ortiz. Plus, they offered Ortiz to some Matchroom fighters and Ortiz turn it down.[/QUOTE] :bs2:Ortiz signed to fight Aj. Mcracken then said Ortiz is all wrong…

He made it to the 10th and won every round he wasn’t knocked down in. [QUOTE=Slicc;20143477]That's a pretty big "if", since he gassed out in the first fight, and was finished before he could even hit the 12th. He's even…

Ortiz may be old & on heart meds but that still didn't stop slave trader junior & his hypejob from avpiding him. Do i want this rerun... No! But I'm gonna watch it. It's a Wilder fight & i expect…