Whyte: Povetkin is a Better Opponent Than Andy Ruiz!

Whyte's return is targeted for an April date in London, according to promoter Eddie Hearn of Matchroom.

Both Whyte and Povetkin were in action in separate fights back in December, as part of the undercard to the Anthony Joshua vs. Andy Ruiz rematch in Saudi Arabia. 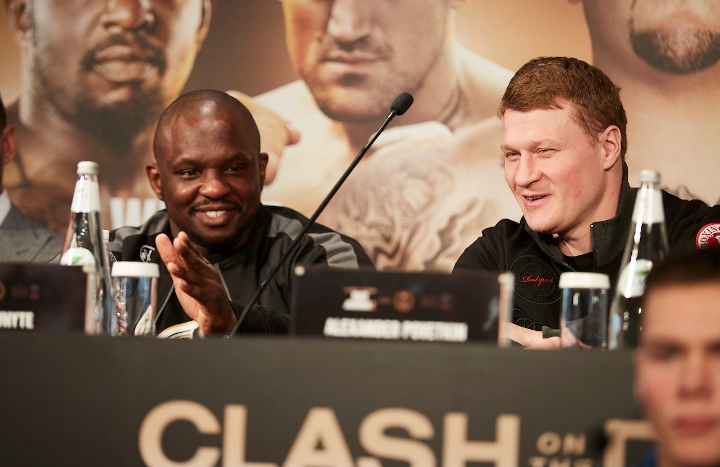 Hearn had made a very lucrative offer to Andy Ruiz to get him in the ring with Whyte. Ruiz, who currently does not have a trainer after parting ways with Manny Robles, has other plans and appears to be heading to a return in the early summer.

Whyte is satisfied with Povetkin being the opponent, because he views him as a better choice than Ruiz - who didn't properly train for the rematch with Joshua and entered the ring in poor shape.

"It looks like it's going to be Povetkin," said Whyte to Sky Sports. "I think he's a better opponent than Andy Ruiz, because one thing about Povetkin, he will come in shape, and he will be motivated to fight.

"I just want to get a high-level guy to fight."

Whyte is the WBC's mandatory challenger to the world title. The winner of the upcoming rematch between Deontay Wilder and Tyson Fury, which takes place on February 22 at the MGM Grand in in Las Vegas, must face Whyte by February of 2021.

[QUOTE=Jkp;20382048]Beat him by head butt, while on peds with a dodgy ref and judges. And Whyte still almost died and ended the fight flat on his back seconds away from KO.[/QUOTE] Hez the first man to put parker down in…

[QUOTE=Robertthebruce;20381689]Erm...no...Whyte ducked AJ when he had a shot at 3 world titles last year and AJ previously knocked the bum out. The guy needs to rematch Parker as he was very very lucky there. Whyte seems to have a thing…

Whyte is getting as bad as Wilder with these ridiculous statements. He’s been playing catch up ever since he got KO’d by Joshua. He plays the victim whilst happily producing terrible performances and raking in the cash. I know he…

[QUOTE=rob g;20381669]I’m convinced Whyte doesn’t want to fight the best. He’ll get decent paydays even fighting journeymen. He seems to be totally ok with it and prefers it[/QUOTE] He gets destroyed by any top 10. He don't want to fight…