Wilder is going to make a defense of his title on Saturday night, in a rematch with Tyson Fury at the MGM Grand in Las Vegas.

Whyte, who holds the WBC's interim title, is the mandatory challenger to the winner. Whoever wins, is mandated to face Whyte by February of 2021. 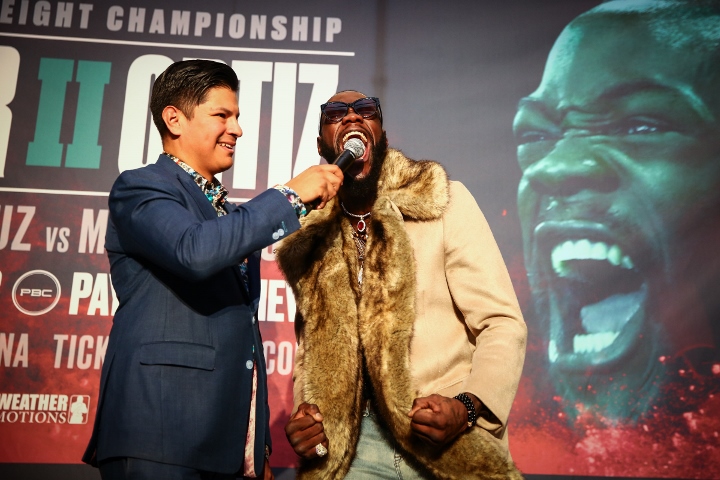 Whyte will return on a date in April or May, against former world champion Alexander Povetkin.

He believes Wilder's opponents are mentally defeated before they even enter the ring, because they are scared of his power.

"Any big guy can punch if you stand there, with your chin up and get clocked, you're going to go over," said Whyte to Sky Sports. "I can punch, I can box, and I'm not scared of him. I have no fear of him.

"Everyone believes in this hype. I don't see him though as normal people see him. I see him as just a normal guy. The persona he tries to give off, he's not that kind of person."

Whyte does not expect to face Wilder in the future.

And, Whyte is no longer confident that Fury, in victory, would face him either.

"Tyson Fury, hopefully he's in a better place, he's in better shape, mentally and physically. I'm hoping he does beat Deontay Wilder, but that doesn't guarantee me a fight," Whyte told Sky Sports.

"He said he would fight me one minute and the next minute he'll fight Derek Chisora. I just want to get hold of one of them and smash them to bits, that's it. I just want to take out years of frustration and anger on one of them."

[QUOTE=OldTerry;20399698]Thank you! I made the mistake of assuming the worse.[/QUOTE] Can't really blame you, in boxing there are more Evanders and Broners that when you hear a bunch of kids sometimes you just assume the worst.

What I see are both Whyte and Fury improving practically every fight, and Wilder not improving. And Wilder does have kind of a low class WWE style way of speaking about how great he supposedly is. Which I've seen in-person...…

[QUOTE=OldTerry;20397723]It takes a lot to be a "family man" especially if your family is four different women with each having children you fathered. Outside of the ring Wilder is so typical of many.[/QUOTE] Wilder a family man lol! Please. You…

[QUOTE=OldTerry;20397723]It takes a lot to be a "family man" especially if your family is four different women with each having children you fathered. Outside of the ring Wilder is so typical of many.[/QUOTE] Just looked into it. He has 4…