Whyte: It’s Not About The Sparring, I Believe I Can Beat Tyson Fury

In recent interviews, heavyweight contender Dillian Whyte has been making a lot of noise about his past sparring sessions with WBC world champion Tyson Fury.

Years ago, Whyte was helping Fury prepare for a scheduled fight with David Haye in 2013. The fight never happened as Haye withdrew with injury.

According to Whyte, he had his way with Fury during some of those sessions. Whyte alleges that he dropped Fury twice and says that particular incident made the 'Gypsy King' break down in tears. 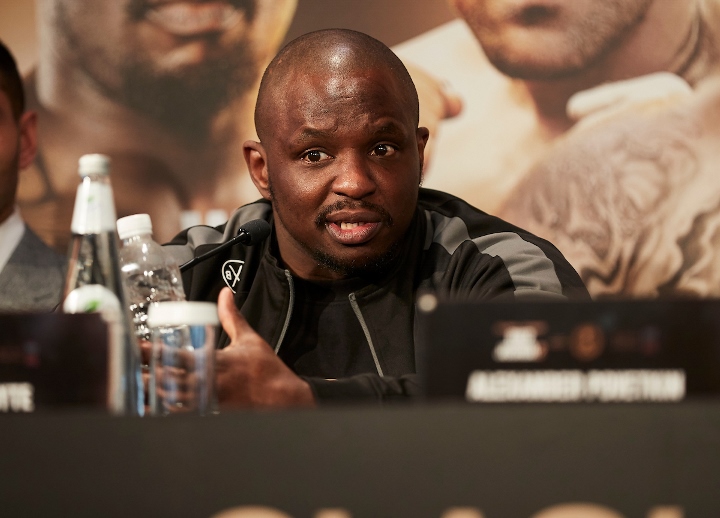 Fury has denied Whyte's claims, firing back with verbal bombs on social media.

However, Whyte is not fixating on his success against Fury in sparring. Whyte believes he has the necessary tools to beat Fury.

Whyte, who holds the WBC's interim-title, is the mandatory challenger to Fury's world title.

Before Whyte can get there, he's scheduled to face former WBA champion Alexander Povetkin on August 22 in Brentwood. And Fury is set to fight Deontay Wilder in a trilogy fight on December 19th, likely in Las Vegas.

“In heavyweight boxing, nothing is guaranteed. We’re making the right moves in the right direction, everything is going good. Honestly, I’m glad that the WBC scrapped the idea of making Tyson Fury the franchise champion. That makes me feel a lot better," Whyte said.

Whyte was wise to not rematch Joshua for about $6m. Why? Because Whyte knows he would have beaten Wilder easily and for having the WBC belt as leverage he would earn the same amount Wilder was going to get to…

[QUOTE=LoadedWraps;20641348][COLOR="Green"] Styles do make fights. Unfortunately for you and Whyte, Fury has seen Whytes style a dozen times. Whyte has only seen a fighter like Fury in his dreams, outside of history books and footage of the greats. And here's…

whyte casting himself as the great black hope

[QUOTE=TheFrog;20640824]The correct translation of this headline is "I believe I can get paid by facing Tyson Fury"[/QUOTE] I wouldn't be so sure. He pulled out of aj fight, after screaming about it for months. I suspect he does the same…