Whyte: I Would Have Destroyed That Coward Deontay Wilder!

Heavyweight contender Dillian Whyte has lashed out in the direction of Deontay Wilder, explaining that the once-beaten boxer is not the feared puncher that he makes himself out to be.

Last month, Tyson Fury dropped Wilder twice and stopped him in the seventh round to capture the WBC heavyweight title.

Whyte, who holds the WBC's interim-belt, has been the number one ranked contender for years, but was passed over several times by the sanctioning body. 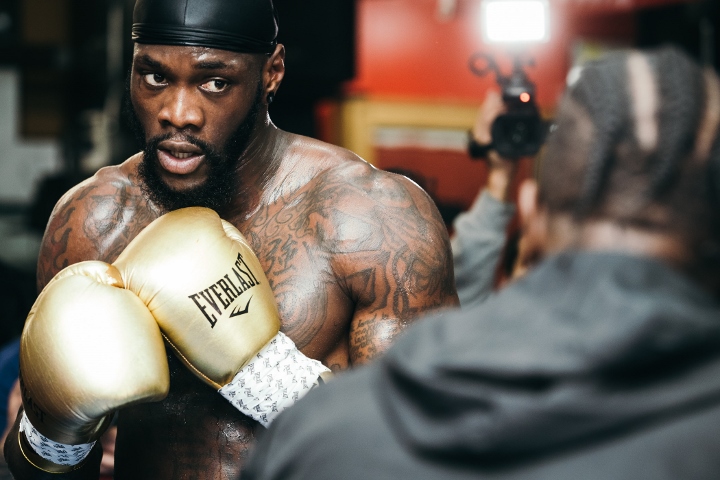 Wilder has exercised an immediate rematch clause, with the third fight being targeted for a date of July 18th in Las Vegas, but now it may get pushed back all the way to October, due to the ongoing coronavirus pandemic.

"It's ridiculous [of a third fight being done], considering he lost the first fight," Whyte told Sky Sports. "I think Tyson Fury is better than him in every department. What's he going to change now that he hasn't changed in the past 12-15 years? Nothing, he's going to change nothing."

Whyte, pursuant to the WBC's order, is due a world title shot by February of 2021.

He details that Wilder's shortcomings in the rematch with Fury, is proof of why he was never selected as an opponent for the 'Bronze Bomber.'

"He can't throw a jab, he can't box," said Whyte. "His balance is terrible, his neck is too weak and he doesn't hit as hard as everyone says.

"For him, it's more timing and speed, that allowed him to knock out the guys he did. It's not like he's such a devastating puncher. You look at his record, he hasn't really knocked out anyone of note really."

"Now you know why the coward ran away from me for so long. I was his No 1 challenger since 2017, yet he never wanted to fight me and ducked and swerved my rightful shot for 900 days, pathetically hiding behind the WBC and begging them to allow him to fight anyone but me. I would have destroyed him and he knows it."

Whyte is slated to face former world champion Alexander Povetkin on May 2 in Manchester, but the contest is likely to get pushed back to a date in June.

Deontay would've actually caught a body, only thing being snatched by u are your titles LMAO

[QUOTE=Jkp;20481943]whyte was obsessed with aj rematch too, until contracts arrived. Then he went completely silent and ran.[/QUOTE]Yeah, that is so true. I think it was partly because AJ defeated him before and he was looking to cash out against him.…

[QUOTE=champion4ever;20481510]:D I see that Dillian Whyte still has the hots for Deontay Wilder. I get the impression that Whyte will still fight Wilder even if he is the WBC's heavyweight champion or not. He is still obsessed with him even…

[QUOTE=LetOutTheCage;20481591]Ah backtracking when I provided evidence, typical Wilder fan. Why didnt Wilder accept a career high payday at the time if it was such an easy fight for him? I think its clear now that Wilder is a very limited…

[QUOTE=Jkp;20481447]Whyte isn't good enough for anyone to want to duck him.[/QUOTE] Cool story. But wilder been ducking, it's what he does best. He should want to fight high ranking fighters cuz that's what good champions do. Not wilder though.