Whyte: I Beat Parker Already; Why Would I Fight Him Again?

Dillian Whyte isn’t interested in a rematch with Joseph Parker.

“Parker was never in my plans,” Whyte told Sky Sports on Wednesday. “I beat him already, so why would he be in my plans? Someone I’ve beaten already. He wants me to be in his plans, but he’s not in my plans.

“That’s what I don’t get. Him and [co-promoter] David Higgins are talking rubbish. Why would I chase someone I’ve already beaten? It makes no sense.” 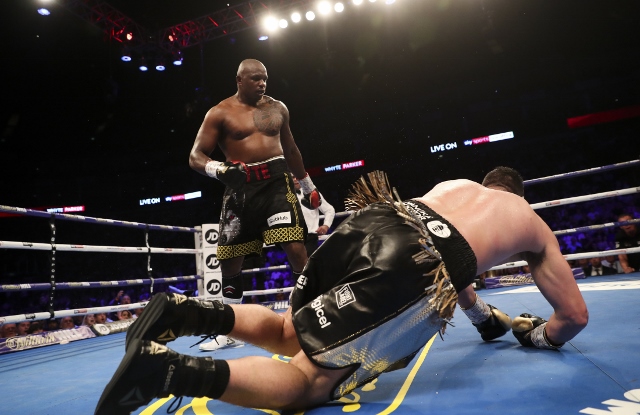 Whyte wasn’t impressed with Parker’s victory over Leapai, either. Parker (26-2, 20 KOs) spent much of their one-sided fight landing power punches on Leapai (32-8-4, 26 KOs), but Whyte wonders why he didn’t truly take out a 39-year-old opponent who took their fight on short notice.

“It was terrible,” Whyte said. “I don’t understand what was going on and what trainer Kevin Barry was telling him. Someone like Leapai, you smash their head in. I think a heavy bag is more dangerous than Leapai. A heavy bag will swing back. The heavy bag will hit you a couple of times.”

Parker realizes Whyte wants a title shot he seemingly has earned. But if he can’t land a fight against WBC champ Deontay Wilder or the winner of the Andy Ruiz-Anthony Joshua rematch, Parker would welcome a rematch with Whyte.

“Listen, if he gave me the call, I’d definitely fight him,” Parker told BoxingScene.com before he beat Leapai. “I respect what he’s trying to achieve. He’s trying to be the champion of the world and fight for the title. But if he doesn’t get the opportunity and doesn’t have the chance, I’ll be willing to take the fight. If they give me a call and say, ‘You’re fighting [Whyte] next month,’ I’m ready. I’m ready to fight him again and avenge the loss I have to him. I know I can beat him. On the day, you know, he was the better man. But I know, deep down, I can beat him if I have a rematch with him.”

If anything, Parkers last fight against Leapai showed just how awful Whyte's jaw is.

I have some sympathy for Whyte, I get his frustration for the situation with the orgs and I do think he’s earned a big fight. That said, the Parker fight ended up being very close and was marred by controversy.…

I enjoy Dillian Whyte fights but he talks some crap. Numerous reasons, Dillian. 1 It was a close fight. I agree that you won. 2. He almost knocked you out in the last round. 3. The headbutt could have affected…

It wouldn't hurt him to fight Parker again considering he didn't win convincingly the last time.if anything dillian was very lucky

Whyte still remembers the last round in his fight against Parker.