After years of pushing, Dillian Whyte is hoping to become the mandatory challenger to the WBC heavyweight title.

The current champion, Deontay Wilder, will defend the title on May 18th against Dominic Breazeale at the Barclays Center in Brooklyn, New York.

Despite Whyte being ranked as number 1 by the sanctioning body, the made Breazeale the mandatory challenger to the belt. 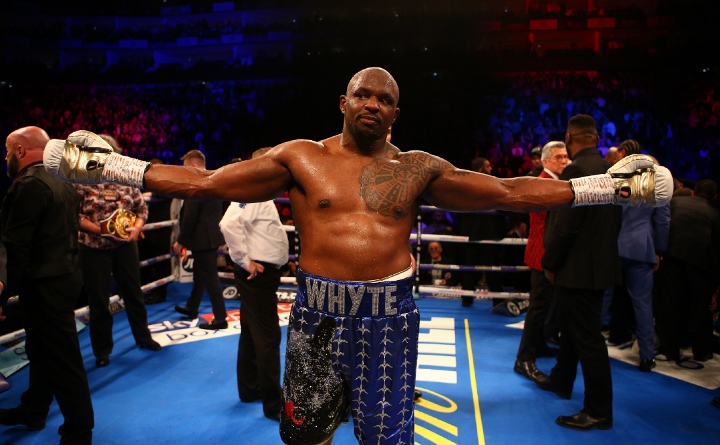 Initially, the WBC had ordered a final eliminator between Whyte and Breazeale for the interim-title.

But after Wilder's negotiations with Tyson Fury fell apart, the unbeaten champion decided to face Breazeale - after the sanctioning body ordered the fight.

Whyte's promoter, Eddie Hearn, has questioned the decision and sent a legal letter to the sanctioning body. A meeting between both sides will take place this weekend.

Hearn is hoping to reach a resolution where Whyte is installed as the mandatory challenger to the winner of Wilder vs. Breazeale.

"It's frustrating," said Hearn to Sky Sports. "We've sent a legal letter to the WBC this week and we actually meet with Mauricio Sulaiman, who's in town for Charlie Edwards' WBC world title fight on Sky Sports this Saturday, and we're saying 'how can you make Breazeale mandatory?'

"We have a mediation session this Saturday with legal counsels to see what the WBC are going to provide as a resolution for Dillian Whyte, because he's worked his way up those rankings, and I actually believe the mandatory for the winner of Breazeale against Wilder should be Dillian Whyte. We'll see where we get with that."

[QUOTE=CharlieStewart;19604875]yet he has beat better guys than wilder has, never mind ortiz who has not beat a single top 10 HW.[/QUOTE] Whytes beaten NO one decent. Except for Parker, and he had to to win the lottery with head butt,…

[QUOTE=Duckweather;19604882]He trying to box wilder in. AJ or Whyte, he want wilder to deal with him.[/QUOTE] Thats plain stupid. Know wants to see whyte vs Wilder, instead of the biggest fight of the decade. AJ vs Wilder. If he's trying…

[QUOTE=Jkp;19604344]Great facts. Whyte is a serial ducker. I thought hearn wanted AJ to fight wilder next? Why he trying to get c grade whyte in the way?[/QUOTE] He trying to box wilder in. AJ or Whyte, he want wilder to…

[QUOTE=Roronoazoro;19603219]Dillian "the duck" whyte has been ducking eliminators but wants a title shot. Ducked pulev, ducked ortiz. Hearn trying to fool unknowledgeable fans who are unaware of dillian whyte ducking/refusing title eliminators which is manadatory/required in order to challenge for…