Heavyweight contender Dillian Whyte is confident that he will score a knockout victory in a potential title fight with WBC world champion Tyson Fury.

Whyte, who holds the WBC's interim-title, is the mandatory challenger to Fury's title.

The WBC issued an order, in 2019, that Whyte has to receive his mandatory shot by February of 2021. 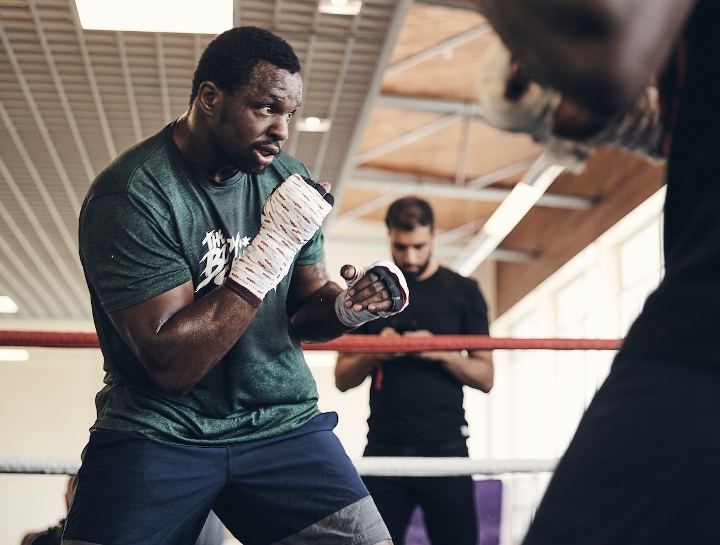 Fury captured the world title back in February, when he dropped Deontay Wilder twice before stopping him in the seventh round.

Fury is scheduled to face Wilder in a trilogy fight by the end of the year.

Whyte believes Wilder utilized the wrong tactics in the fight - and failed to break Fury down in the first encounter.

"He [Fury] knows Deontay Wilder doesn't hit as hard as what everyone makes out, and Deontay Wilder can't body punch. Had Wilder been hitting him in the body, earlier in the fight, he wouldn't have been able to get up from that punch in the later rounds, but his body was fresh, his legs were fresh," Whyte told Sky Sports.

"There was no body punching going on, Wilder can only head hunt. You can shake the head punches off sometimes, but when your body is broken down, and you've been hit up and down - that's how you've got to fight Fury, you have to fight up and down. You can't just head hunt. He's a tough guy, he gets up, but I'm going to be targeting head and body, relentless all night long, so it will be a different story."

In the last few months, Whyte has claimed that he scored several knockdowns of Fury during sparring sessions many years ago.

He believes Fury still has the memory of those sparring sessions fresh in his head.

"He's got all these skills and all this other stuff, but I'm an animal and I'll come to fight, simple as that," said Whyte.

"He has been in the ring with someone like me, because I sparred him many times. I was very inexperienced at the time, and I still gave him work. A lot of work!"

[QUOTE=Jkp;20637705]Quote, only the blindest most naive UK fool, would believe Whyte is innocent. [B]You need to do some research about peds in sport.[/B] [URL="http://www.steroids.info/2012/07/18/ukad-finally-catches-boxer-using-epo-after-steroids-and-hgh-use-for-six-years/"]http://www.steroids.info/2012/07/18/ukad-finally-catches-boxer-using-epo-after-steroids-and-hgh-use-for-six-years/[/URL][/QUOTE] Yes, you keep telling me that I need to "do some research"; how about you just…

[QUOTE=Redgloveman;20637120]Notwithstanding the fact that resumes are generally judged by the content of the resume rather than the subjective quality of the actual performances; you still owe me a reply from nearly a month back. Since you are the forum's self-appointed…

Fight Joe Joyce and Dubois winner. If you win you get fury

[QUOTE=deathofaclown;20637378]If Povetkin has one good night left and then he could do it. I’m just not sure what he has left, he hasn’t looked that great since he come back from being caught doping. Hunter is a decent fighter, but…