Although there had been a handful of boxing events globally since the de facto start of lockdown in mid-March, this past week will likely be considered the week that the sport truly returned. There had been one-off shows in Nicaragua and gym shows in South Korea already, but the sport’s gaze still fixates on the United States, its television offerings and the money that comes with them, so ESPN and Top Rank’s first summer series offerings felt like boxing’s true restart.

Boxing is existing in unprecedented times, so fans probably had vastly differing views as to what the sport would look like. Would everything be the same except with no fans? Would we be fighting in a biodome in the desert? Will the sport’s top fighters be itching to get back into the ring right away? Between the pair of ESPN offerings, as well as the Polish pay-per-view headlined by Mariusz Wach and Kevin Johnson, and the German stream topped by Jack Culcay and Howard Cospolite, we have a clearer idea of what to expect from boxing during this time.

The unspoken secret about boxing broadcasts is that even prior to the pandemic, the majority of fights aired somewhere in the world take place in front of scarce and mostly quiet crowds. Boxing broadcast production teams are well-versed in dealing with less than raucous environments and having to compensate with tight camera shots and well-mic’d ring areas to capture the ambience of the fight itself. The current situation takes the need for those two things to an even higher level, given that there are no fans at all, and ESPN’s production team knocked its first two attempts out of the park.

The Top Rank on ESPN set consisting of 11 LED screens is modern, it’s bright, and it stands in for a lack of background visuals quite well. From an audio standpoint, the fights thus far haven’t sounded that unusual at all. Those who arrive early for live events to watch the undercard, or stream local shows are pretty familiar with the quietness of a boxing venue most of the time. The chatter of each fighter’s corner is audible, and the punches landing are a little louder than usual, but if you closed your eyes and pressed play, it would be indistinguishable from any other undercard bout or scarcely attended fight from the archives.

Perhaps the biggest surprise was the effectiveness of the commentary setup. As any broadcaster will tell you, calling fights remotely is less than ideal. Calling fights remotely when the people you’re calling them with aren’t even in the same room as you is a different challenge completely. To account for this, ESPN has outfitted Joe Tessitore, Timothy Bradley, Andre Ward and Mark Kriegel, all in different locations, with monitors and separate screens to see one another, to prevent talking over one another. Thus far, it’s worked. The pacing of the commentary is a tad slower and more conversational due to their inability to make in-person observations and the imperfection of internet connections, but seldom is anyone tripping over their colleague. Even when things got messy and confusing during Jessie Magdaleno-Yenifel Vicente, the crew was able to follow and comment on goings on without the luxury of asking the referee in person what the rulings were.

It will be interesting to see how this setup holds up when the stakes of the fights go up and the excitement level of the commentary is tasked with rising with them, but the first two events suggest that it will be able to rise to the occasion. 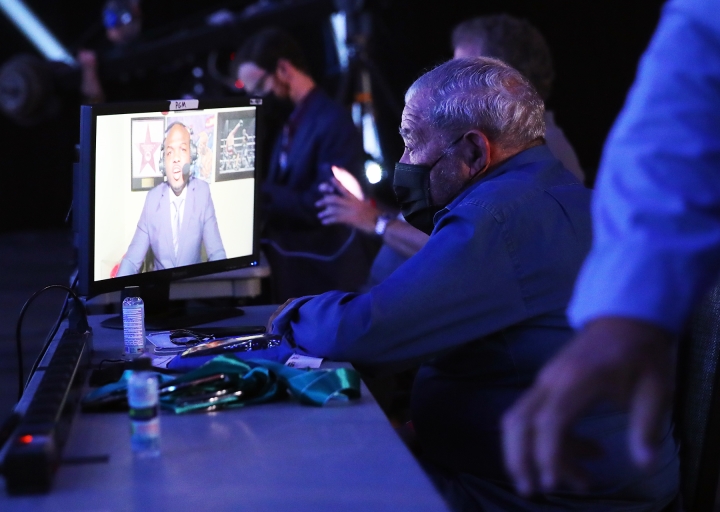 2. The Sport Will Depend On Its “Essential Workers”

As difficult as calling a fight in a pandemic is, it pales in comparison to actually fighting during a pandemic. Fighters across the world have been placed in less than adequate scenarios in terms of staying in fight shape. In addition to the closure of most boxing gyms globally and social distancing preventing sparring in many cases, boxing’s schedule has been up in the air until, well, right now.

But, fighting without ideal preparation or advanced notice is nothing new of a subsect of the sport’s participants, its journeymen. These fighters are often described as “guys who are always ready, in the gym waiting for a call.” That is sometimes true, but it’s more accurate to describe these fighters as folks who are always mentally ready to fight, and ones prepared to enter a fight when they’re less than 100%. There’s plenty of journeymen who enter fights out of shape, but they’re still willing to get in there and (probably) lose.

With circumstances less than satisfactory and purses potentially lower than normal without gate receipts to cash in, fighters like Kevin Johnson and Calvin Metcalf are more valuable and necessary than ever. When Mariusz Wach became one of the first fighters/promoters to formally schedule a fight during the pandemic, Johnson was there to immediately sign on the dotted line. Five hours after the fight, he had posted a photo of himself on Facebook shirtless standing in a fountain saying that “what happens on vacation stays on vacation.”

When Top Rank needed an opponent for Quatavious Cash, Calvin Metcalf was willing to step up, and was probably pleased that it wasn’t another undefeated prospect. Metcalf became a commentator and Twitter favorite for his Hulkster haircut and hard-charging style.

Boxing promoters always rely upon journeymen to ensure the development of their prospects and the existence of their events when fighters or fights fall through. Journeymen are there to do the jobs nobody else wants to do, and there will be a lot of them coming up—not to mention a lot of shows to save as inevitable positive COVID-19 tests roll in.

3. The Fights Will Be Pretty Exciting

The highlight of last week’s slate of fights was undoubtedly the battle between featherweights Adam Lopez and Louie Coria. The two combined to throw 1603 punches, and landed nearly a third of them on one another. In an extremely thin year, it might be one of the clubhouse leaders for Fight of the Year.

A fight such as this one, between two fighters with a pair of losses on their records respectively, one of whom (Coria) was a career six-round fighter, normally wouldn’t have been on a main ESPN broadcast. This fight showed how unfortunate that is, how many well-matched bouts wind up unseen because the stakes aren’t high enough for the broadcaster.

However, it’s hard to divorce the level of action in this fight from the circumstances from which it was born. Once again, most boxers are not in optimal training situations at the moment. Sonny Fredrickson is preparing for his upcoming ESPN bout in his friend’s garage because his gym is closed. Mikkel Lespierre, who has an ESPN bout upcoming as well, was seen on Twitter training on the bike path of a Bronx park thanks to video posted by Ring Magazine’s Ryan Songalia on Twitter.

Lopez and Soria might have had better training environments, or they might not have. But it stands to reason that even fighters who are in good cardiovascular shape and can still throw a lot of punches and put them in combination might be lacking defensively given that they have had, at best, reduced access to training partners.

Even Kevin Johnson, the notoriously lackadaisical defensive shell along the ropes specialist, came out firing punches and made for a more exciting fight than could have reasonably been expected.

If we can even get a fun scrap out of the Kingpin, we’re sure to get even more thrilling TV fights when fighters like Lopez and Coria lace up again.