Weekend Rout Beat The Necessity Out of Fury-Wilder Rivalry

Deontay Wilder was bleeding from the ear.

And come to think it, so was I.

The now-former heavyweight champion had been injured from a punch to the head from conquering behemoth Tyson Fury. As for me… I think it was just my eardrum recoiling from hearing Bob Arum sing.

Either way, it was certainly an eventful Saturday night in Las Vegas.

One that left onlookers with myriad questions, not the least of which was just how much of a chill will Wilder’s call-out of his ring-walk attire have on the 45-pound steel circus costume industry.

But given our status as the world’s most-trafficked boxing website, we’ll leave that one for the boys at GaudyWardrobeScene.com and instead deal with the most significant ring question of the weekend – namely who could, or should, Fury be fighting the next time he enters a four-roped ring.

Contractually speaking, the front-runner appears to be Wilder, whom multiple reports have claimed has already exercised – or at least soon will exercise – a second-fight rematch clause that automatically gives him the right to turn the twin-bill with the Gypsy King into a trilogy.

But given the severity of the beating doled out in fight No. 2, and the suggestions made by many that he lost the first time around too, does it need to be next?

The vibe here is no. And maybe not at all. 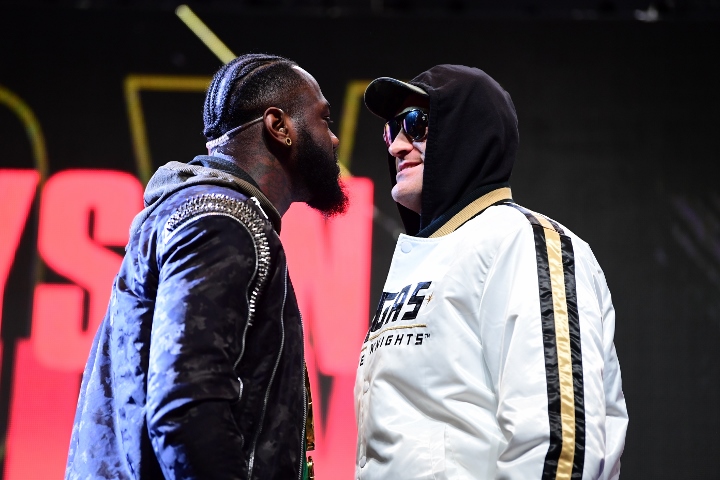 Of course, lest anyone forget, I spent loads of pre-fight words in this space suggesting Wilder would stop Fury, but that pick was voided the instant Fury's right hand landed behind Wilder's left ear.

And over the subsequent four rounds, as he wobbled awkwardly after even the lightest of contact, I'd be lying if I claimed I hadn't uttered phrases like "he's done," "he's about to get knocked out" and "they need to save him from himself" before it finally ended.

So yes, to answer that question, I’m on Team Breland. A hundred times over.

And based on what I’ve seen through 19 rounds, I've gone all-in on Team Fury, too.

Not only do I think he wins a trilogy fight, but I think he does it just as easily as Saturday.

For all the reasons I was too distracted to pay attention to last week.

While I conceded that the Englishman was more talented and had won more rounds in meeting No. 1, I stupidly clung to the notion that the two rounds in which Wilder scored knockdowns were more important than what had occurred repeatedly across the other 30 minutes.

Like any other bomber, Bronze or otherwise, the bombs only matter if they land.

And if Fury fights Wilder the way he did Saturday night – off the front foot, forcing the Alabaman to focus on his evasion and defense at least as much as his offense -- they're much less likely to do so.

And when his blows land, they have a particularly devastating (read: decisive) impact.

For those reasons, so long as he's in shape and prepared, he'll always have Wilder's number.

One thing’s for sure, if Arum, Wilder and the Premier Boxing Champions team can make people come back in six months and buy into Wilder-Fury III for another $85 or so per shot, they’ll have pulled off the promotional job of the century.

But while Wilder’s best chance as Fury’s foil may have come and gone, a superfight option does exist.

While ardent supporters of Wilder, Dillian Whyte and others might disagree, the only foe that really and truly matters for Fury – now that he and Wilder have done business twice – is Anthony Joshua.

The other UK-based superstar entered the weekend as the top heavyweight in the world, according to the Independent World Boxing Rankings, he holds the rest of the significant title belts in the division and he was tied for 13th among the world's richest athletes on the 2019 list compiled by Forbes.

Only one boxer, Canelo Alvarez, was placed higher on the list.

Which means, unless the Mexican plans a surprise move to the 200-plus-pound neighborhood, Joshua is the man to see when it comes to breaking the bank.

And given the chronic jabbering between he and Fury as England's favorite heavyweights since Lennox Lewis, there's never been a more natural – and necessary – time for it.

Fury is a seemingly prime 31, but his history shows that personal turmoil is never far away. And while Joshua emerged unscathed and victorious from the Andy Ruiz rematch, the dubious nature of the initial result suggests that too many hors d'oeuvres before the main course could scuttle the whole meal.

It's no wonder, then, that Eddie Hearn took to Sky Sports after the fight to kickstart the lobbying.

[QUOTE=Get em up;20423248]Consensus is he lost the first fight. Yet his record shows it as a draw. He deserves the chance to gain his titles back. Although I do think Fury will beat him again he may suprise everybody. 1…

Of course he is going to rematch at 34 , where is he going to that type of money being a challenger . Writer is correct only the outcome will be worse with 6 more months of Kronk training and…

[QUOTE=LoadedWraps;20426849]It really isn't though, nor should it be. People like that dont just hold back the sport, they hold back society. The fighters I root for, their color, creed, and origin are irrelevant to me. That's the example to follow,…

[QUOTE=BlakBread904;20424743]Boxing is a tribal sport though; folks like to root for fighters that look like them, that they can identify with... you sure you understand what you are watching? What rubs you the wrong way regarding Wilder celebrating his heritage…

[QUOTE=MC Hammer;20423641]So Fury comes out as a king being carried and even calls himself the Gypsy King and it's all good, but Wilder being proud of being black is a problem.[/QUOTE] Gypsy king is a nickname. Only one was forcing…