Adonis Stevenson and Badou Jack: Neither boxer exited the ring with any degree of satisfaction after fighting to a majority draw Saturday at Air Canada Centre in Toronto. They both scored points in the public eye, though.

Many fans had lost interest – and possibly faith – in Stevenson because he had managed to avoid compelling fights the past several years even though he is the WBC light heavyweight titleholder. It was reasonable to ask: Can the hard-punching Haitian-Canadian still fight at the highest level at 40?

Jack, an accomplished former super middleweight titleholder in his prime, was the perfect foil for Stevenson to prove he remains formidable. And while Stevenson didn’t win, he fought well enough to retain his belt for the ninth time in five years and remain in the mix for more big fights going forward.

Jack’s bad luck continued. He started slowly but finished strongly against Stevenson, leading some to believe he should’ve been awarded the victory. Instead, he settled for his second draw in three fights. He fought James DeGale to a majority draw in January of last year, another fight some believed he should’ve won.

It’s no wonder Jack is frustrated.

The good news is that he demonstrated that he can compete on at least even terms with a big, powerful, proven light heavyweight in only his second fight as a full-fledged 175-pounder. And had he been more active early in the fight, he probably would’ve won.

In the end, he did nothing to hurt his standing and probably enhanced it even though he left the ring in disgust.

Stevenson and Jack should definitely do it again, although I’d still like to see Stevenson (29-1-1, 24 knockouts) face fellow slugger Sergey Kovalev somehow. And the top young light heavyweights -- Oleksandr Gvozdyk, Dmitry Bivol and Artur Beterbiev – are all valid opponents for Stevenson.

Jack (22-1-3, 13 KOs) has done nothing but fight top-tier opponents for the past three-plus years. There is no reason to think that won’t continue. 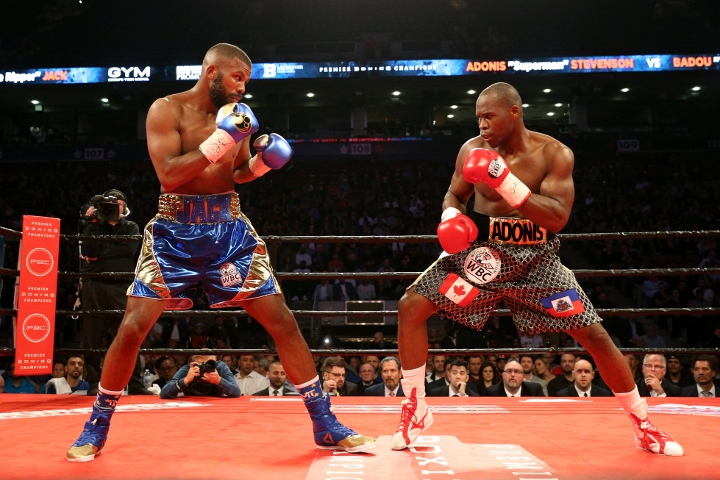 I was surprised as anyone that Josh Warrington outpointed Lee Selby on Saturday in Leeds, England, Warrington’s hometown, but no one should be shocked.
Warrington (27-0, 6 KOs) can’t punch but he’s an excellent boxer who outhustles opponents, as he did against the talented Selby (26-2, 9 KOs) to win a split decision and the IBF featherweight title by scores of 116-112, 115-113 and 113-115. And he didn’t come out of nowhere. His stepping stones to a major championship – reportedly the first for a Leeds fighter – include British, Commonwealth and European titles.

The logical next opponent for Warrington is Irishman Carl Frampton, who has a fight but no opponent scheduled for August 18. That wouldn’t give Warrington enough to time to rest and then prepare for another big fight, though. I’m guessing that Warrington will face a lesser foe before the end of the year and target Frampton after that. I think Frampton would win but Warrington proved he can compete with the best.

Most people thought Selby would be the one to meet Frampton in an all-U.K. showdown. Instead, he expects to move up in weight. He has fought as a featherweight since 2010 and, he said, he now has trouble making 126 pounds. As he told the BBC, “It was just one fight too many at that weight and my performance reflected that.”

Assuming Selby feels more comfortable at 130, he’ll probably rise quickly in the rankings. The top junior lightweights should be wary.

Gary Russell Jr. vs. Joseph Diaz Jr. was a bad matchup for Diaz from the beginning. The L.A.-area fighter had no advantages over Russell going into the fight. Speed, athleticism, skills and power all worked in Russell’s favor on Saturday in Oxon Hill, Maryland. The only even category: Both former Olympians have strong amateur pedigrees. Thus, it was no surprise that Russell won a convincing decision to retain his WBC featherweight title. That said, Diaz, who did a good job attacking Russell’s body, was more competitive than some thought he would be in his first title shot. I think the 25-year-old has the all-around ability to win a major title – just not against Russell (29-1, 17 KOs). Meanwhile, Russell’s handlers really need to get him into the ring with a next-level opponent. He’s too good and has been around too long to not take that final step. … Golden Boy Promotions has had a particularly rough stretch. First Canelo Alvarez tested positive for a PED, which scuttled his rematch with Gennady Golovkin. Then Jorge Linares (who is co-promoted by Teiken) was stopped by Vasyl Lomachenko after a strong effort. Sadam Ali lost his title to Jaime Munguia by a brutal KO. And now Diaz, one of the company’s top talents, came up short against Russell. I also think Manny Pacquiao will beat Golden Boy’s Lucas Matthysse on July 15. … Former strawweight titleholder Hekkie Budler’s best days seemed to be behind him but he provided a surprise on Sunday, narrowly outpointing Ryoichi Taguchi (27-3-2, 12 KOs) to take Taguchi’s IBF and WBA junior flyweight titles in Japan. Budler (32-3, 10 KOs) lost a split decision to Milan Melindo in his first try at a 108-pound title in September. Taguchi subsequently took Melindo’s belt. … Tyson Fury (25-0, 18 KOs) has an opponent for his first fight in 2½ years. The former heavyweight champ will face Sefer Seferi (23-1, 21 KOs) on June 9 in Manchester, England. Seferi is a 39-year-old former cruiserweight who lost a wide decision to Manuel Charr in his only meaningful heavyweight fight. Of course, he’s the perfect opponent for Fury, who needs to shed ring rust against an opponent who poses a limited threat. The big fights will follow shortly.

I would call Stevenson/Jack a half of a fight, didn't really get started until the 6th round. I enjoyed Russell vs. Diaz more.