The fact that Lomachenko did THAT to a fighter of Rigondeaux’s unquestioned ability was amazing.

Lomachenko toyed with his fellow two-time Olympic champion, turning what was supposed to be a once-in-a-lifetime matchup of two boxing wizards into just another dominating performance by one of the most talented boxers imaginable.

Rigondeaux was the fourth consecutive opponent to quit against Lomachenko, prompting the Ukrainian to give himself the moniker “No Mas Chenko.”

That’s appropriate. Lomachenko’s footwork, his quickness, his precision punching and his all-around ability humiliates his opponents to a point where their task becomes hopeless. Rigondeaux made that determination after the sixth round, when his trainer asked him whether he wanted to continue and he shook his head.

Lomachenko, also graceful post-fight, attributed his victory to his size advantage. Rigondeaux went up two weight classes for the fight.

“It’s not a big win for me because (Rigondeaux is in) another weight category,” he said immediately after the fight.

That was a HUGE win, a defining victory only 11 fights (10-1, 8 knockouts) into his career. Rigondeaux was an amateur legend, an unbeaten pro and one of top fighters pound-for-pound yet he was rendered utterly helpless on Saturday.

That fact was disappointing for those of us who were hoping that the unusual matchup of such skilled boxers would at least be an interesting chess matchup.

Instead, it quickly became something else: a platform on which Lomachenko could demonstrate his astounding ability.

I hesitate to use the word “great” to describe any fighter. With Lomachenko, though, it’s starting to become appropriate.

Guillermo Rigondeaux: Rigondeaux (17-1, 11 KOs) waited his entire career for an opportunity like the one he received at Madison Square Garden. And then, when push came to shove, he did absolutely nothing.

Indeed, it couldn’t have gone much worse for the Cuban defector, who hadn’t lost a fight since he was an amateur in 2003.

One, he was disarmed by Lomachenko from the start. His only effective weapon was to hold when the winner got close. You can count the punches he landed on your hands and toes. Two, he suffered the indignity of losing a point for holding. Three, he quit on his stool after six one-sided rounds.

And, four, he made his disastrous night even worse by serving up an excuse after it was all over: He claimed he couldn’t continue because he had injured his left hand in the second round.

One could react to Rigondeaux’s post-fight announcement in a number of ways. Pick any of the following: countless others have fought with injured hands, Rigo couldn’t have beaten Lomachenko with three good hands and Lomachenko deserved unqualified respect from Rigondeaux, not an excuse.

The truth is Rigondeaux was outclassed. Lomachenko was bigger, which probably worked in his favor. Rigondeaux is probably beyond his peak, which didn’t help him. And we’ll give Rigondeaux the benefit of the doubt and accept his excuse.

The shame is that Rigondeaux offered no resistance and then wouldn’t acknowledge it, instead blaming an injury for his loss. Thus, he’ll be remembered as an excellent boxer who failed miserably – both in the ring and after the fact – in the biggest fight of his life. 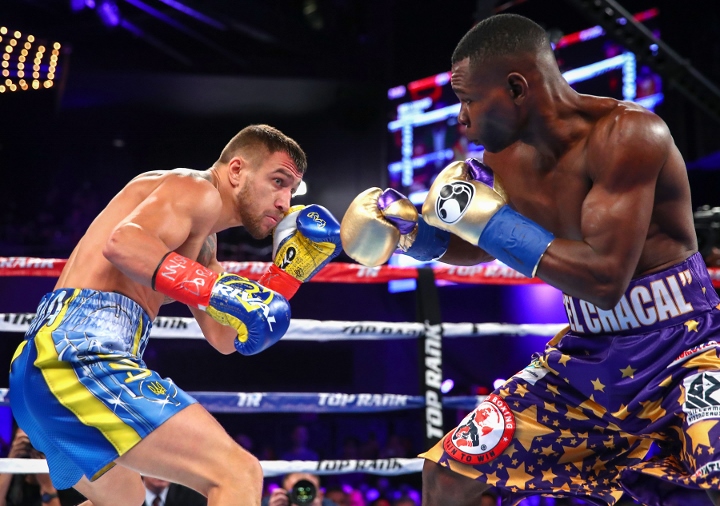 Winky Wright: I covered the career of Fernando Vargas closely when I was a newspaper writer in Los Angeles in the late 1990s and early 2000s. That’s why I traveled to a casino on the Oregon coast to see him fight in 1999, when “Feroz” was at the peak of his skills.

I had only vaguely heard of his opponent, a Floridian with limited backing who had been fighting primarily in Europe. I never forgot Ronald “Winky” Wright after that night.

Wright pushed Vargas to his limits before losing a majority decision that some believe was a gift to the better-known U.S. Olympian. Wright wouldn’t lose again until 2007, when he made an ill-advised move up to 170 pounds to face Bernard Hopkins and fell short on the cards.

Between 1999 and 2007, Wright, a left-hander, gained the reputation as a superb boxer with limited punching power. He sometimes put fans to sleep with his technical style but invariably made his opponents look foolish, compiling a record of 12-0-1 between Vargas and Hopkins and winning four titles in three 154-pound championship reigns.

That’s why Wright (51-6-1, 25 KOs) will be inducted into the International Boxing Hall of Fame next year, along with Erik Morales and Vitali Klitschko.
It was no secret that few elite fighters wanted to tangle with Wright, as he had a relatively small fan base but posed a great risk. Even if you were able beat him, according to conventional wisdom, you’d look bad doing it.

Among his victims during his dominating run were Shane Mosley (twice), Felix Trinidad (in a near shutout decision) and Ike Quartey. And most observers thought he deserved the decision in his draw with Jermain Taylor, his only blemish during that period.

Vargas, Mosley, Trinidad, Taylor and few other fighters around their weight – including Oscar De La Hoya – received more recognition during their careers than Wright did but he was in their class. Maybe better.

I, for one, am pleased that the Wright is receiving credit for his special ability.

Erik Morales: The biggest compliment one could pay Morales is that he – along with rivals Marco Antonio Barrera and Juan Manuel Marquez – was a worthy successor to the great Julio Cesar Chavez among Mexican fighters.

Morales was a fine, well-schooled boxer with considerable punching power. And he has a strong resume, as he fought and generally beat the best fighters around his weight over 15 productive years. That includes his historic trilogy with Barrera (in which he won one of three wars), a decision over a near-prime Manny Pacquiao and the fact he became the first Mexican to win titles in four divisions.

Those credentials were enough for him to earn his ticket to Canastota, New York, next June. He was much more than that, though.

Morales (52-9, 36 KOs) earned the respect of everyone in boxing because of his accomplishments but he earned the love of countless fans because of his fighting spirit. He could outbox you but his inclination was to go to war, to take the risks necessary to rip your head off and please the crowd in the process.

That’s what’s expected of Mexican warriors, fighters like Carlos Zarate, Ruben Olivares, Salvador Sanchez and Chavez. And Morales embraced his duty – over and over again, until he had nothing left.

Remember the feeling as Morales made his ring walks? Pure, heart-racing excitement. That can be said only of fighters who give their hearts every time they fight. That was Morales, the ultimate warrior.

He was similar to the insanely fearless Arturo Gatti in that respect but he boxed on a much higher level, which, for me, made him more fun to watch than Gatti and other brave, but lesser talents.

Morales was a great fighter who was also great to watch. That’s what made him special.

Vitali Klitschko: I didn’t think much of Klitschko when I first saw him fight in the late 1990s. I thought he was slow and only moderately skilled, just another big but limited heavyweight from Europe.

Then, in 2003, he fought Lennox Lewis and my perception changed instantly. He gave the future Hall of Famer all he could handle for six rounds before having to retire because of a horrible gash on his face.

Klitschko lost the fight but gained tremendous respect. And one more thing: He never lost again.

Vitali (45-2, 41 KOs) wasn’t the athlete younger brother Wladimir was. He was a good boxer, though. And he was incredibly tough, much tougher than his more-celebrated sibling. I always thought Vitali would annihilate Wlad in a back-alley fight and probably beat him in a boxing ring.

The elder Klitschko had three reigns as a heavyweight titleholder. The first ended when he tore the rotator cuff in his shoulder against Chris Byrd and had to quit a fight he was winning on the cards.

The second reign ended when his body broke down too many times for him to continue.

That set up perhaps his most remarkable accomplishment. After almost four years out of the ring, he returned to boxing, won another title and reigned for another three years as one of the two best big men in the world.

Klitschko might’ve retired undefeated had he not been cut against Lewis and injured against Byrd, which would’ve led some to argue that he was among best heavyweights of all time. As it was, few heavyweights in history dominated their eras as he did.

Congratulations to legendary promoter and my friend Don Chargin, whose long wait to see his business partner and beloved wife elected to the Hall of Fame has come to an end. It’s about time. Lorraine Chargin worked at Don’s side, not in a supportive role. Together they gave fans some of the greatest boxing shows in the history of the sport. And, on a personal level, Lorraine was one of my favorite people in more than a quarter century of covering boxing. She was smart, she was strong and she was caring. I couldn’t be happier that she has been recognized for her contributions. … I have nothing against Jim Gray, who is a good television interviewer. But induction into the International Boxing Hall of Fame? I don’t get it. … I think time has run out on a possible rematch for 37-year-old Orlando Salido and Lomachenko, whose only loss came against the Mexican brawler. Salido (44-14-4, 31 KOs) went down three times and was stopped by hard-punching Miguel Roman (58-12, 45 KOs) on Saturday in Las Vegas. Lomachenko has said he’d like to avenge his loss but doesn’t want to fight an “old man.” That might be what Salido is now. “All the wars I had,” Salido said, “caught up with me.” … A weekend wouldn’t be complete with controversial scoring. Kenichi Ogawa (23-1, 17 KOs) defeated Tevin Farmer (25-5-1, 5 KOs) by a split decision to win the vacant IBF junior lightweight title on the Salido-Roman card. Many believe Farmer deserved the nod, including Farmer. “I worked too hard to get robbed,” he said. Rematch? … Francisco Vargas (24-1-2, 17 KOs) bounced back nicely from his knockout loss to Miguel Berchelt, outpointing capable Stephen Smith (25-4, 15 KOs) in a fight shortened by a cut on Smith’s ear on the Salido-Roman card. … Prospects Shakur Stevenson (4-0, 2 KOs) and Michael Conlan (5-0, 4 KOs), and young contender Christopher Diaz (22-0, 14 KOs) all easily beat overmatched opponents on the Lomachenko-Rigondeaux card. Who has the brightest future? I think it’s Stevenson, who is ridiculously quick and more dynamic than the other two. Time will tell, though. Conlan and Diaz obviously are gifted fighters too.

I predicted 7-8 round ko by Loma and school lesson. Did not expect El Chacal to quit. But its been 2 days where is the the x-ray, his twitter is quite.... I like Rigo, he is still kewl with me…