Fury dropped Wilder twice, before stopping him in the seventh round at the MGM Grand in Las Vegas.

In a recent social media post, Marsellos Wilder, the younger brother of Deontay Wilder, made a sensational claim that Fury may have loaded his gloves for the rematch with Deontay.

“You know it’s crazy when you [are] great. They gotta do everything that is underneath real to figure out how to stop you. And the most wicked sh-t about [it] is- people on your own team will do anything for the hate [or] money to help [the opponents] take you down. It was discovered by doctors that my brother has a dent [at] the side of his head [due] to a blunt object [striking] his head [in] his last fight. No glove or fist was able to cause the damage according to the autopsy. My daddy once told me if you pull a gun out on somebody, you better kill them. Because if you don’t, they are gonna come back and kill you. The king is about to rise again. We [are] coming for blood," Marsellos Wilder stated. 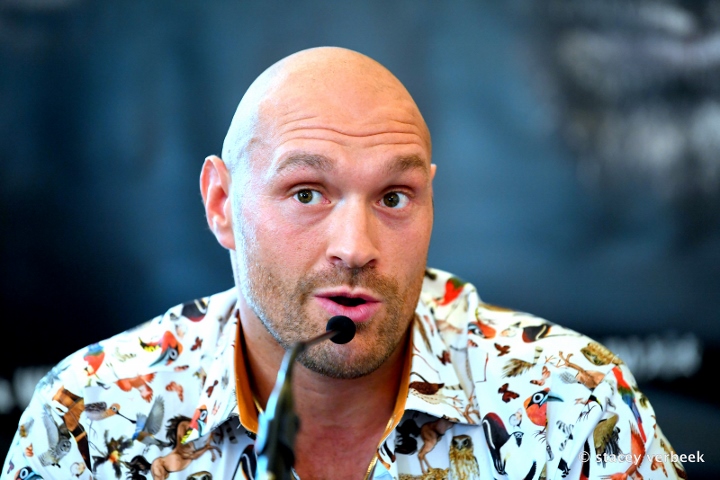 Once he became aware of the allegations, Fury fired back.

"This is just a quick video to address this foul play talk from Deontay Wilder and his team. I've just read an article saying I might have had some blunt objects in my gloves, yeah, two big 19st 7lb, 275lb destroyers in each glove," Fury said.

"Getting punched on the temple will do that to you, but not unless Deontay Wilder's own trainer Jay Deas is in on the conspiracy theory as well, along with all the Las Vegas state commission guys who never left the room. [Wilder's head trainer] Jay Deas was in the room when I had my hands wrapped; he examined them, he was in there when I had my gloves put on, and examined them - everyone else in the room too, they don't leave, we know this.

"Everybody citing foul play, bullsh-t; and next time I'll put a dent in his boxing career and end it because it will be two knockout losses in a row and bye, bye forever."

Sulaiman explained that he was personally in the dressing room for both fights and saw no evidence of glove tampering or other illegal acts.

"It's ridiculous," Sulaiman told Sky Sports. "It's difficult to understand.

"I was there before and after the fight. I saw the hand wraps, I saw them with the gloves. I was in the ring when they came into the ring, and I was sitting right there during the fight. At no moment, in either fight, I saw anything that would look suspicious whatsoever. After the fight, they take off the gloves, they are handed to the commission.

"It's very sad, because to try and take away something from a huge victory, one of the greatest nights of the sport in the century, to try and put a blemish on that event, is so irresponsible, and so stupid. It should not be given any consideration."

Yeah but Fury taking nandrolone is true. And no one brings it up. Ever. I wonder why???

[QUOTE=KnickTillDeaTh;20640924]What does it say about you if my brain is so under developed, yet I'm more knowledgeable than you would ever be on this topic. You ran into a corner covering your ears saying lalalalalala like a childish idiot. You…

[QUOTE=naranja111;20638171]It's not damning. It's just Fury's glove scrucnhed up in the crook of Wilders arm You can literally see AJs knuckles through the glove in the first Ruiz bout [url]https://www.gettyimages.co.uk/detail/news-photo/andy-ruiz-jr-of-california-and-anthony-joshua-of-england-news-photo/1147547879?adpopup=rue[/url][/QUOTE] This has been debunked!!!

[QUOTE=champion4ever;20640926]I believe that what you are saying is only partly true. I agree that Team Wilder dropped the ball on this one. Jay Deas is an incompetent who needs to be fired ASAP. As a matter of fact, I think…

[QUOTE=Bunch Pag;20640812]If there was concrete evidence then surely Wilder would be vocal about it. Surely a lawsuit would have been served. He's got a long line of excuses and now it seems we are adding conspiracy theories into it all..…