Frank Warren, promoter for WBC heavyweight champion Tyson Fury, does not rule out the possibility of Anthony Joshua being shocked by mandatory challenger Kubrat Pulev.

Fury is bound to a trilogy fight with Deontay Wilder, who plans to exercise a clause for an immediate trilogy fight. Fury stopped Wilder in the seventh round of their rematch, last Saturday night at MGM Grand in Las Vegas. 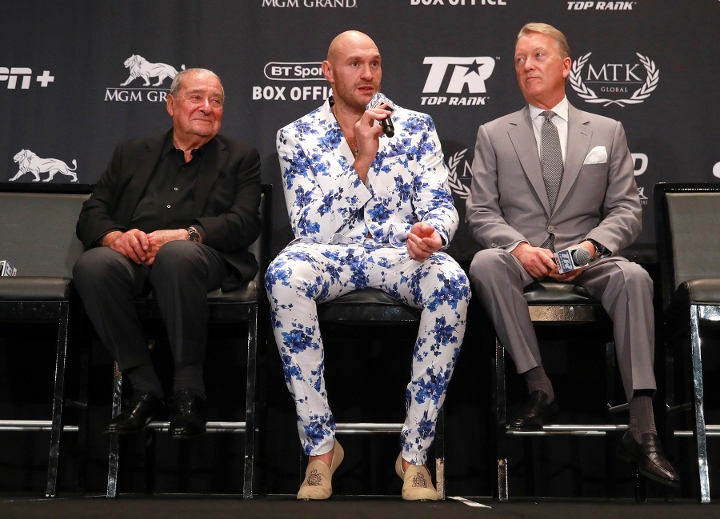 Warren views a potential unification between Fury and Joshua as the one of the biggest sporting events in the history of the UK.

“The stumbling block is he has to fight Pulev. The stumbling block for that fight is that his chin is made of old Waterford Crystal and we will see what happens with that. If anyone clips him he will go," Warren told The Standard.

“If I was him I wouldn't fight [Pulev]. I would even vacate the belts to get it on. He should not take the risk. I'd prefer him not to take the risk, I'd prefer Wilder not to take the rematch and let's get it on. That would be the biggest sporting event to take place in the UK since England winning the World Cup. You would not be able to get a ticket for it. The whole country would stop for that fight.”

However, Warren admits that a Fury vs. Joshua clash could easily take place in another country. There are likely to be numerous offers from a variety of locations, and Saudi Arabia is ready to break the bank to secure the rights to that mega-fight.

“In a dream world, it is Tyson Fury versus Anthony Joshua in London. But they are professional athletes and no different to a Gareth Bale or Aaron Ramsey leaving their football clubs to make big money elsewhere. I don't know where the fight would take place, wherever the most money is. The boxers are the ones that get in the ring, they are the ones who make the choice. I was sat next to the [Saudi] Prince for the fight so we will see what happens," Warren said.

“But the fact is Joshua is spoiled goods. We saw what happened in New York in the first fight with Ruiz and he come back and beat a guy who trained in his fridge. I'm not taking anything away from Joshua he trained well and did his job. Come on, this is different gravy with Tyson. He is the No.1 heavyweight and Joshua is in the slipstream."

[QUOTE=andocom;20424277]Haymon will win every time eh? How did that work out in Ruiz v Joshua 2, how many HW belts does the Haymon camp have currently? Win every time huh? How will Haymon hold up the unification until he is…

[QUOTE=sportbuddha;20421823]Yeah but he has a fraction of Fury’s fans and holds no belts so mandatory (paperwork) or not, he’s not even close to the fight people want to see. In the background it is really about Haymon vs Hearn and…

[QUOTE=MisanthropicNY;20422858]Being realistic is very healthy actually. I wish your comment was actually directly related to a point. The UK fans will buy any fight from a name even if he's way past his prime - Del Boy has been recycled…

Warren is a p*ssy! He said AJ isn't good, yet him fighting Fury will be the biggest fight in history.

Both fighters looked brilliant in there most recent fights