Warren Confident That Wilder, Joshua "Will Have To Face" Fury

Heavyweight contender Tyson Fury is about a month away from his debut in Las Vegas.

Fury will return to the ring on June 15th, when he faces unbeaten Tom Schwarz at the MGM Grand in Las Vegas.

The contest is going to be the first for Fury in his high profile co-promotional deal with Top Rank and ESPN. 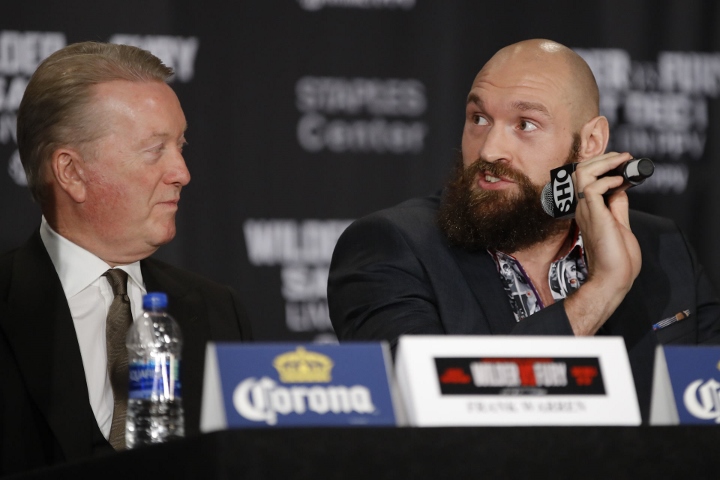 Wilder is tied to Showtime and Fox Sports, while Joshua has aligned himself with streaming service DAZN.

Frank Warren, the lead promoter for Fury, says the boxer's exclusive deal with ESPN will not prevent the fights with Joshua and Wilder.

Warren feels confident that Top Rank and ESPN will invest a lot of money into making Fury a major name in the United States.

“ESPN have put a lot of resources behind him financially and their network behind him to build his profile in the States. His profile, if he does what he’s supposed to do he’ll have a bigger profile than all of them. That will increase his value and they’re looking to build their pay per view platform out there, which they will do. It’s to the benefit of him and all the other boxers regarding pay-per-view fights. It’s yet another big market,” Warren said.

“[Tom Schwarz, his opponent is an] undefeated fighter, it’s the same as before Tyson fought Klitschko, he’s in the same position now. Tyson was 24-0 and no one gave him an earthly [chance] against Klitschko. Anything can happen in boxing. I think Tyson’s too smart for all of them but it is what is, it’s his [ESPN] debut fight and that’s where we’re at.”

[QUOTE=Oshio;19745393]Wilder fanboys stopped looking at Joshua's resume long ago. It's shameful for them to look at it and look at that of Wilder.[/QUOTE] You’re right it’s easier to say “look what he’s done In The last year” instead of remembering…

[QUOTE=Fabes88;19744083]No one has beat more top rated heavyweights than aj. In 40 fights wilder has one, arguably two good victories and you want to sit here and act all high and mighty because he finally decided to fight two guys…

No one is gonna be forced to fight him 1) because they offered him fights so no force there and 2) because he so boring and will fight such weak opposition that no one will care about him. His profile…

I know they are trying to promote Fury and that's their jobs, and i think fighting tom is an indication that Fury needs another tune up or two before going up against those two, the issue here, is the insinuation,…