Welterweight Vikas Krishan is hoping to jump back into the punch-for-pay leagues as he continues his hunt for Olympic gold.

The two-time Indian Olympian has decided that the best way to brace himself for a third Olympics run is to re-assume his professional post, albeit temporarily. (In 2016, the Olympics ruled that professional boxers were eligible to compete in their games).

“I took a break from professional (boxing) with due permission from my promoter to pursue my Olympic dream,” Krishan, 28, told Scroll.in. “Now that I have qualified, I will go back to pro to prepare myself,” he said. 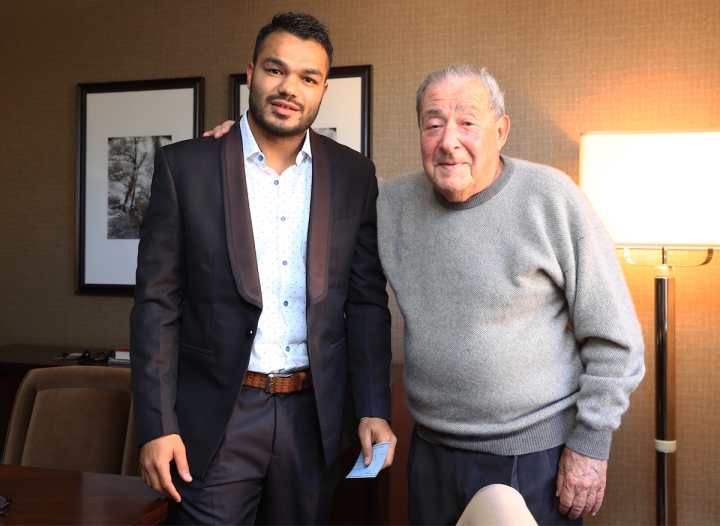 Krishan, who signed with Top Rank in 2018, quickly went  2-0 (1 KO), only to suffer a back injury that halted his momentum. During his hiatus, he began reevaluating his career and concluded that his conditioning in the professional ranks was not up to snuff. Not to mention the memories of coming short in the 2012 and 2016 Olympics came flooding back to haunt him…so, feeling that a third attempt at winning a gold medal for his country was too irresistible to turn down, Krishan, with his promoter’s blessing, decided to hop back over to the amateur circuit for Tokyo 2020, which, because of the global Covid-19 outbreak, has been postponed tentatively to the summer of 2021.

Now, Krishan, who qualified for a spot (along with eight other Indian compatriots) in the next Olympics earlier this year, is temporarily hopping back to the professional fold, because, well, what better way to train than by actually fighting? He says he would like to fight 3-4 times.

“As soon as I manage to get a flight, I am going to the USA,” said Krishan, who is currently in the South Indian capital of Bangalore. “I am in touch with Top Rank Promotions. They have promised to arrange fights for me and I hope to compete in 3-4 bouts before the Olympics.”

“That would help my Olympic chances more than anything else because it is in the pro circuit that I learnt the crucial lesson of not believing in luck,” added Krishan, who plans on competing in the 69kg category (152 pounds). “It is all about ability, there is nothing called luck.”

The move is unique in that most of his colleagues preparing for the Tokyo Olympics are training at the National Institute of Sports in Patiala, way up north in the Punjab province. Krishan, however, was recently suspended from the training grounds, along with another teammate, for violating Covid-19 protocol. After an inquiry, the NIS concluded that the breach was unintentional and promptly lifted the suspension. Krishan has no plans of going back, though, and will continue to train in Bangalore before heading to the U.S.

“I will continue training here,” Krishan said. "I have fallen into a rhythm and I don’t wish to disturb myself by once again taking the trip to Patiala. I don’t see the point."

Krishan’s Olympic highlights include beating current welterweight titleholder Errol Spence on points during the London 2012 games, only to have the decision subsequently revoked due to fouls. At the Rio 2016 Olympics, he got as far as the quarterfinals by defeating American Charles Conwell.