Video: Deontay Wilder Confident Fury Will Get Knockout Out

Three days of a boisterous, tension-fueled international press tour came to a close on Wednesday in downtown Los Angeles when heavyweight giants Deontay Wilder and Tyson Fury had to be separated by security after the verbal sparring threatened to turn physical in front of a large contingent of both Wilder and Fury supporters.

In the closing moments of the third-straight press conference ahead of their December 1 showdown for the WBC Heavyweight World Championship at STAPLES Center, emotions appeared to boil over as both fighters had to be held back. To watch Wednesday’s press conference in full, visit the SHOWTIME Sports YouTube channel: https://s.sho.com/2QiGaPg

With the whirlwind press tour in the rear-view mirror, the fighters now have 58 days to prepare for the biggest heavyweight fight on U.S. soil since Lennox Lewis KO’d Mike Tyson in June 2002. Wilder vs. Fury is the latest major heavyweight event to take place in the Southland, expanding an already deep history of heavyweight boxing featuring Hall of Famers Joe Louis, Muhammad Ali, Lennox Lewis and Vitali Klitschko, the last of whom faced off at Staples Center in 2003, with Klitschko also stopping Chris Arreola at Staples Center in 2009. 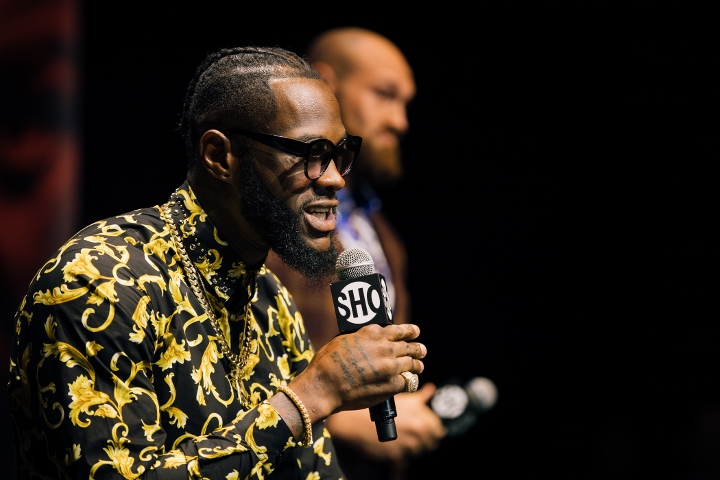 Tickets for the event, which is promoted by BombZquad Enterprises and Queensberry Promotions, in association with DiBella Entertainment and TGB Promotions, are ON SALE NOW. Tickets are priced starting at $75, plus applicable fees, and are available via AXS.com.

I will love to see the Gypsy King Dance

Fury will get decapitated live on PPV! AJ vs Whyte 2!