It has been a far from perfect few days for Oscar De La Hoya, but Vergil Ortiz has a chance to put a smile back on the Golden Boy’s face this weekend.

De La Hoya has been infuriated by the IBF’s decision to strip Canelo Alvarez’s middleweight belt with that organization, following an inability to agree terms on a fight with mandatory challenger Sergiy Derevyanchenko.

He’s mad. He’s frustrated. He’s unhappy with the IBF, annoyed with some reporters and generally irked by how things are going. And if De La Hoya is looking for something to lighten his mood, a 14th straight knockout in 14 fights for Ortiz, competing as a pro in his hometown for the first time, might just be the perfect solution.

“Ortiz Jr. has dynamite in both hands,” De La Hoya told the Los Angeles Times. “Fans can expect a crazy fight for as long as it lasts.”

It is easy to see why Ortiz, 21, is tipped for big things. He looks the part, speaks well, and is being fast-tracked to the top in the stacked 147lb division. He has punching power galore and is coming off a ferocious knockout of veteran Mauricio Herrera, on the undercard of Alvarez-Daniel Jacobs in May.

Ortiz went hard after Herrera and simply proved to be way, way too strong. Now settled at 147 lbs, he is likely to be the bigger man when he steps in against Orozco. This will be his third fight of 2019, following three in 2018. Golden Boy have increased the difficulty level of his opponents with regularity, but he has negotiated each fresh step comfortably.

“Vergil is a special fighter,” trainer Robert Garcia said. “He has special talents and the ability to adapt. He brings a lot of power and great condition. We are excited for the fight and for the future with him.

“People have seen his explosiveness but there is still a lot they have not seen. We are looking forward to putting that on display. He is improving all the time. We are talking about a quality fighter who is very entertaining to watch in the ring.” 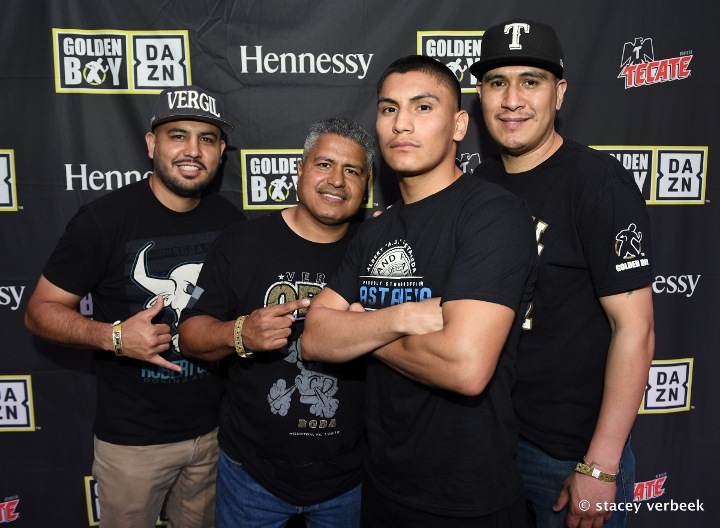 One of the intriguing things about Ortiz is that he is crafting his own path when it comes to promoting his own fights. He sees himself in some ways as an old school gentleman fighter, and generally shuns all attempts to engage him in trash talk.

When interviewers informed him before his last clash that Herrera had been letting his mouth run, he looked genuinely offended. “You serious, he really said that?” he said to DAZN. It didn’t distract him from taking his 38-year-old opponent out in three punishing rounds.

The challenges keep getting tougher, however, and Orozco is the most difficult of the lot so far.

“The fight will mean a lot to me,” Ortiz told the Ventura County Star. “This is my first time fighting in (Grand Prairie), so this is very special to me. I have a lot of supporters in Texas, and they have been wanting to watch me fight.

“I know there will be a lot of people talking about it, so I wouldn’t be surprised if it is a full house.”

If Ortiz continues on his upward trend, there will be no shortage of opportunities down the road. Big names abound at welterweight, and you can bet De La Hoya already has his eye on lucrative matchups for Ortiz against some of the stars of the division. Ortiz himself has already expressed interest in fighting Keith Thurman, stating, matter-of-factly, that he is confident he would beat Manny Pacquiao’s most recent victim.

Meanwhile, he needs to continue taking care of business. Another win on Saturday, and another knockout, would keep him on the right path – while making De La Hoya’s week feel a whole lot better.

If Ortiz loses Oscar gonna be dead or in rehab by Monday morning.

Until Ortiz's chin gets tested or goes the distance, we don't know for sure if he's really the goods. I only hope they're not rushing this kid to a title that's where things go south. GBP has given more attention…

V.Ortiz is so good to be true!?

[QUOTE=Kiowhatta;19965774]Yes and Yes. I have been banging on and on my drum about the insidious way the IBF is stripping champions far too quickly, and have a look at any website that posts all top ten rankings for all four…