Vergil Ortiz Jr: I'm Over This Quarantine Stuff, It's Time To Fight Now

It only made sense for Golden Boy Promotions to restart exactly where the company left off prior to the start of the coronavirus pandemic.

Nobody was thrilled with that applied logic than Vergil Ortiz Jr.

The unbeaten welterweight and 2019 BoxingScene.com Prospect of the Year was due to headline a March 28 DAZN card versus Canada’s Samuel Vargas live from The Forum in Inglewood, California. The event was among the first wave of shows canceled due to the ongoing global health crisis but has now been rescheduled in full, to take place July 24 at Fantasy Springs Resort Casino in Indio, California.

“When I got the news that I was headlining Golden Boy’s first show back, I felt so honored,” Ortiz (15-0, 15KOs) told BoxingScene.com. “That news really made my day. I’ve been training since January for the fight that was going to happen in March. We were two weeks away from the fight when it got postponed.

“Keeping the same opponent helps, though it wasn’t easy to restart training. But we had the foundation down from the last camp so that helped. We will be ready for this fight.” 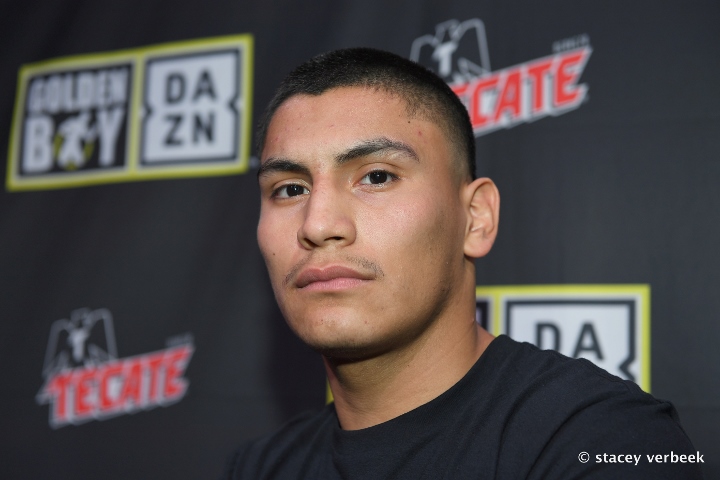 Ortiz received the honor after Golden Boy reshifted its own summer plans. The original blueprint called for 21-year old lightweight contender Ryan García (20-0, 17KOs) to headline a July 4th card at the same venue, only to go sideways in a hurry once the boxer and promotional outfit couldn’t agree to terms for such an event.

That opened the door for Ortiz, a 22-year old from Grand Prairie, Texas who is coming off of a four-win campaign in 2019—all inside the distance. The idea for 2020 was to begin with Vargas and then build to at least a title eliminator, if not a straightaway shot at a welterweight title. The timetable affects those plans, but his upcoming fight very much remains a welcomed starting point toward returning to what he does best.

“There were things I was able to appreciate outside of boxing these past few months, but honestly I’m over this quarantine stuff,” admits Ortiz, who is currently in training camp with top-shelf cornerman Robert Garcia. “That staying at home at stuff got old real quick. I played the guitar all that I wanted. I played the piano all that I wanted. Got tired of playing my PS4.

“It’s time to fight now. The fact that I’ll be the first (main event) back on DAZN makes me feel so proud.”

Can't wait till see vergil back at it. Hope he fights a solid step up after Vargas