Vergil Ortiz: I Can Stay At Welterweight Another 2-3 Years

At some point, there will come the time where Vergil Ortiz Jr. gets to officially graduate from prospect and onto the contender stage.

Though grateful for his health, there remains a part of him that wishes it could have already happened as previously scheduled.

“I had a very good camp. It was the first camp that I was going 10 rounds in the first week,” Ortiz Jr. (15-0, 15KOs) told BoxingScene.com of his preparation for his planned March 28 welterweight clash versus veteran trialhorse Samuel Vargas. “In past camps, we normally don’t do 10 rounds until 2-3 weeks before the fight.

“This camp, the first day of sparring we went six rounds. Right after that, we went straight to 10 rounds. It was consistent 10 rounds of sparring every day after that. My conditioning was on point. I was ready.” 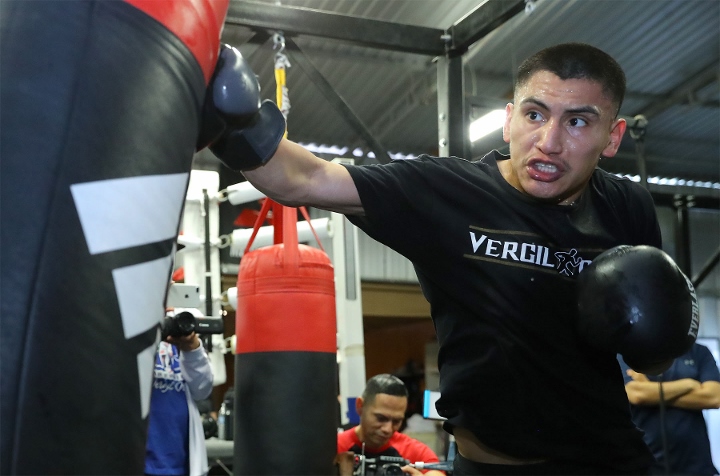 The 22-year old instead became among the first wave of boxers to watch their bouts get canceled in the wake of the coronavirus disease (COVID-19) pandemic. There were 125,260 cases worldwide and 4,613 deaths attributed to the disease at the last possible where there remained hope of his March 28 DAZN headliner seeing the light of day.

Global COVID-19 figures have now soared to more than 1,100,000 positive cases and more than 64,000 deaths as this goes to publish. It proved the decision wise by the California State Athletic Commission (CSAC) in mid-March to shut down all events remaining in the month, having now been extended through all of April.

For the reigning 2019 Prospect of the Year, it meant heading home two weeks earlier than expected and without being able to show off the progress made in training camp. Everything around him has since shut down, including any local gyms where the Grand Prairie, Texas native would train when not at Robert Garcia’s training headquarters in Riverside, California.

That doesn’t mean the process slows down any.

“There are some people who blow up in weight and don’t take the sport seriously. They are the ones who will suffer the most once (the sport resumes),” Ortiz Jr. notes. “That’s never been a problem for me. Even when I was at 140 and having to work even harder to make weight towards the end, I’ve always [remained] disciplined.”

Despite his youthful existence (Ortiz Jr. turned just 22 on March 25), it will also mean remaining a welterweight no matter when the sport can resume its regularly scheduled programming.

“Moving to 147 last year was a huge help for me,” insists Ortiz Jr. “I was at 140 for five years including the amateurs. The weight was taking a toll on me. With that seven-pound gap and the way I train, I can stay at welterweight for at least another 2-3 years.”

[QUOTE=JakeTheBoxer;20498755]I like this guy, I wanna see him fighting top welterweights. Time to step up. How about fighting someone like Josesito Lopez?[/QUOTE] Austin Trout is looking for welterweight smoke so might as well

I like this guy, I wanna see him fighting top welterweights. Time to step up. How about fighting someone like Josesito Lopez?

Young man time is on your side.... "Spence, Crawford and the rest "...(Danny Garcia, Yordenis Ugas, Sergey Lipinets, Jaron Ennis, etc etc ... will HAPPILY be waiting to ACCOMMODATE You!!

This dude is solid!!! This is another great example of let me get the efffff out of the ghetto mentality!!! Unlike ghetto sewer rats that want to "keep it real, kna'm saeen", ... and if this comment hurts your ghetto…

Spence, Crawford and the rest, you have been warned.