Verdejo: One Loss Doesn't Define Your Career; I'll Be Around For A Long Time

Felix Verdejo is confident he is well on his way to overcoming the devastating defeat he suffered in March 2018.

Once considered a potential superstar by his handlers at Top Rank, a reinvigorated Verdejo is 3-0 since Antonio Lozada battered him and dealt the Puerto Rican lightweight his first professional loss, a 10th-round technical knockout. Verdejo also is more comfortable because he’ll fight for the second time Thursday night with respected Cuban trainer Ismael Salas in his corner.

The 27-year-old Verdejo (26-1, 16 KOs) is scheduled to battle Will Madera (15-0-3, 8 KOs), of Albany, New York, in a 10-round lightweight encounter ESPN will air from MGM Grand Conference Center in Las Vegas. He feels better prepared now that he is training in Las Vegas, as opposed to when distractions adversely affected his preparation in Puerto Rico.

“Little by little, I’ve learned from Ismael,” Verdejo told BoxingScene.com through a translator. “He has made adjustments from the technical standpoint. He has helped me to be more precise with my punches and how to sit down more on my punches. He just made improvements from the qualities I already had.” 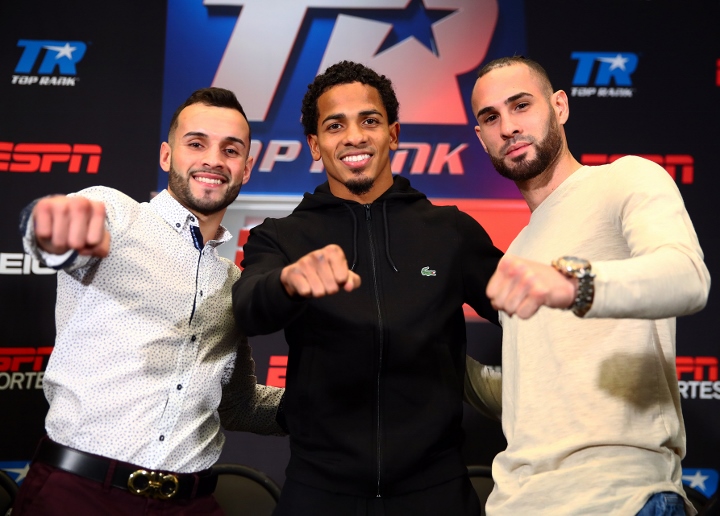 If Verdejo defeats Madera, the 2012 Olympian feels he’ll improve his chances of receiving a title shot.

“I think it’s very close,” Verdejo said. “I’m well-positioned in the rankings. I just have to win convincingly on July 16th, because I feel a world title opportunity is right around the corner.”

Verdejo is ranked ninth by the IBF, 13th by the WBO and 15th by the WBC in the 135-pound division. He extended his winning streak to three in his last fight – an unremarkable, 10-round, unanimous-decision victory over Dallas’ Manuel Rojas (18-4, 5 KOs) on January 18 at Turning Stone Resort Casino in Verona, New York.

In some ways, Verdejo views his loss to Lozada (40-4-1, 34 KOs) the setback he needed to begin behaving more professionally.

“I learned a lot from that loss,” Verdejo said. “It helped me mature and to take things more seriously. Little by little, I’m gonna keep showing that I’m getting better with each fight that passes. And I’m gonna show my fans that I’ll be around for a long time.”

Verdejo doesn’t think promoter Bob Arum, Top Rank’s matchmakers or his passionate Puerto Rican fans have given up hope that he can become a world champion.

The 29-year-old Madera is unbeaten, but he hasn’t faced an opponent as talented as Verdejo.

Verdejo has good basics and ability but is very repetitive with his offense. Not hard to figure him out after 5-6 rounds.

how old is this guy? it seems as he never got through the prospect stage