Felix Verdejo made a splash in the ring, while helping Top Rank and ESPN improve network ratings for the second straight telecast.

The resurgent lightweight took a significant step forward in his career following a 1st round knockout of previously unbeaten Will Madera (15-1-3, 8KOs). The bout topped the July 16 edition of Top Rank Boxing on ESPN which averaged 326,000 viewers over the course of the 136-minute telecast, according to Nielsen Media Research. 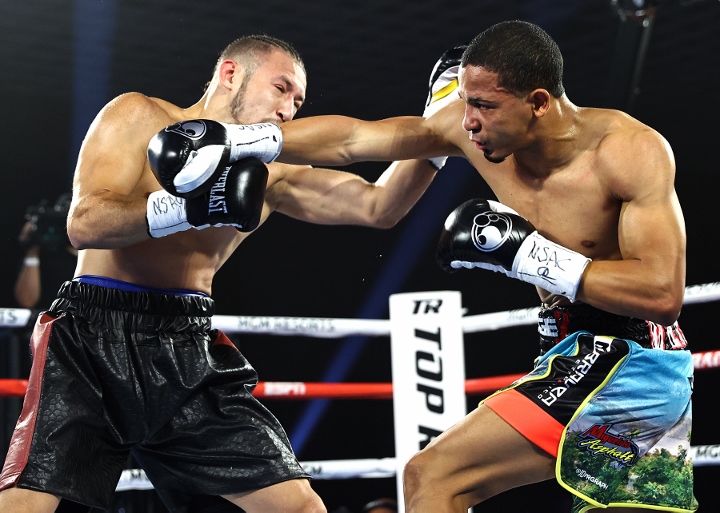 Overall, the telecast marked a 6% improvement from the series’ preceding event on Tuesday which averaged 307,000 viewers. In comparing main events, Verdejo’s 1st round stoppage of Madera outpaced the viewership of Mikaela Mayer’s 10-round win over Helen Joseph which averaged 369,500 viewers and peaked at 380,000.

Verdejo’s shining moment helped save a show which suffered three fallouts during fight week. The original main event was lost at the scale after Philippines’ Mark John Yap weighed nearly nine pounds above the contracted limit for his canceled clash versus featherweight contender Miguel Marriaga.

Two more bouts were scrapped due to a fighter from each matchup testing positive for coronavirus.

It was clear from the moment his bout received an upgrade that Verdejo (27-1, 17KOs) was prepared to carry the event. Much has been made of the fact that he simply did what he was supposed to do, given the opposition level.

Still, it showed the strides made in his second straight camp with renowned trainer Ismael Salas. His desire to pursue unified lightweight titlist and pound-for-pound entrant Vasiliy Lomachenko (14-1, 10KOs)—who defeated Verdejo in the quarterfinal round of the 2012 London Olympics—remains more ambitious than realistic, but his career is on the right track for the first time in years.

Verdejo has appeared twice before on ESPN’s flagship station, both in his lone career defeat and his most recent bout prior to Thursday. The 2012 Puerto Rico Olympian and BoxingScene.com’s 2013 Prospect of the Year suffered a stunning 10th round stoppage loss to Antonio Lozada in a March 2018 bout at Madison Square Garden’s Hulu Theater in New York City.  Four wins have followed, including a pair of ESPN=aired victories in 2020.

Earlier this year, Verdejo managed a 10-round victory over Manuel Rojas on a January 18 telecast headlined by former light heavyweight titlist Eleider Alvarez’s 7th round knockout of Michael Seals. The show played to 704,000 viewers, though serving as the benefactor of a UFC preliminary undercard to the triumphant return of global superstar Conor McGregor’s return. The preceding ESPN telecast averaged 1.767 million viewers.

Of course, all of that took place at a time when sports were thriving with fans in attendance and viewers given a reason to regularly watch sports-only television network. The bulk of Top Rank’s closed-doors series has served as the most watched program every Tuesday and Thursday evening it has aired since its June 9 debut.

The final show for the month will take place July 21, with former featherweight titlist Oscar Valdez (27-0, 21KOs) to face Puerto Rico’s Jayson Velez (29-6-1, 22KOs) in a 10-round junior lightweight battle. From there will come a 16-day break before the series picks up again on August 6, at which point it will run on Thursdays only.

Better numbers than expected. Felix Verdejo is going to attract more viewers, If he shine more the better the competition. I have faith in Ismael Salas work. :boxing:

What gym in Toledo, OH is ESPN/ Top Rank drawing from to fill out these cards? Alot of these guys seem to be hailing from that city.

It was a horrible card like usual from top rank. But the reason why alittle more people watched cause they had a name beyond hardcore fight fans. But the hardcore fans know felix v. Isn't going anywhere. Top rank had…

Unimpressed, fought a can and won. He will lose again when he steps up.