The best lightweight fight possible in 2019 is probably the same as it was a year ago. The problem, for now, is one half of the equation isn’t currently active in the division.

We may yet see a clash between Vasyl Lomachenko (13-1, 10 KO) and Mikey Garcia (39-1, 30 KO). At different points in 2018, both men unified a pair of belts in the class. Garcia abandoned his to chase a shot at welterweight titlist Errol Spence. After suffering defeat, Garcia’s future has been clouded. Will he continue to fight under the PBC umbrella? Could he do business with Eddie Hearn and DAZN? Where will he land on the scale?

No matter how it plays out, if Garcia ends up back at lightweight it won’t be without at least another fight around 140 lbs. as he works back down the scale. His body is likely best suited for lower on the scale. In terms of the possible business of a Lomachenko-Garcia fight, a little more wait might be good, giving Garcia a chance to put the Spence fight behind him in the mind’s of the public.

It’s just as likely we never see it. The window for the fight, at least at lightweight, may have passed. Garcia has shown he can win at Jr. welterweight and there is plenty of activity there. Lomachenko may pursue a belt in a fourth weight class eventually. It might be a question deferred.

All we can be sure of is the now.

It isn’t Campbell’s first chance at a title. In 2017, Campbell made a good impression in a game effort against then-WBA champion Jorge Linares. Campbell survived an early knockdown and a cut and did well enough to get the advantage on one judge’s card in a split decision loss. It would be surprising if Campbell bettered that performance against Lomachenko.

The Ukrainian is one of the rare handful of talents who pass through only occasionally. He’s the kind of talent that makes even the most grizzled, seen-it-all-before old heads sit up a little straighter when he’s in the ring. After winning belts at featherweight and Jr. lightweight, it’s clear his goal now is to clean out all the belts at lightweight. 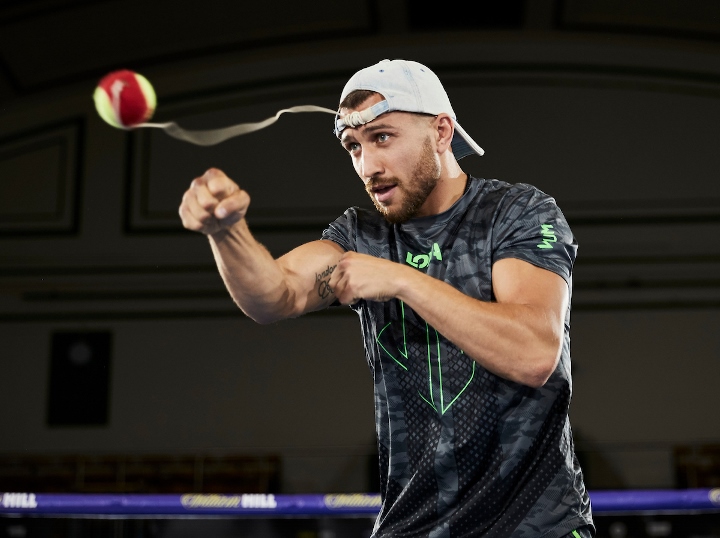 Will unification be enough or are we looking at the early part of what could be an extended reign for Lomachenko at lightweight? The physicality of Lomachenko’s fight with Linares last year, and his following scrap with Joe Pedraza, suggest the size of the professional lightweight class might be the ceiling for Lomachenko barring a well timed chance at another belt five pounds up.

If Lomachenko wins this weekend, the next step at lightweight would be trying to snag the IBF title currently held by Ghana’s 32-year old Richard Commey (29-2, 26 KO). Commey has won five in a row since consecutive tough losses to Robert Easter and Denis Shafikov. He’s not the most stylish performer at lightweight but Commey is tough and can crack. Will Commey still have a belt when a Lomachenko fight could be made?

Much will depend on the career management of Teofimo Lopez (14-0, 11 KO). The 22-year old displays brashness enough to already be talking up a potential showdown with Lomachenko. His July outing against Masayoshi Nakatani suggested the young Lopez isn’t quite the man he might be in the ring someday. His personality is top of the marquee. His in-ring game is still a work in progress. Lopez is the mandatory for Commey. If the inherent logic of getting the Brooklyn native a bit more seasoning before his first crack at a belt prevails, Lomachenko-Commey would make all the sense in the world.

Boxing hasn’t had an undisputed champion at lightweight since the late Pernell Whitaker unified the class in 1990; the WBO belt was lightly regarded enough then that not winning it really didn’t count against Whitaker with anyone. Before Whitaker, the last man to unify the belts in the lightweight division is arguably the greatest living fighter in the world today, Roberto Duran (though, it’s worth noting, Duran was always the lineal champion of the class while he reigned).

Lomachenko could find worse company. In both cases, it wasn’t just the act of unifying that mattered. Both Whitaker and Duran also put together reigns that made unification just a part of the story. It was Duran’s exclamation point while Whitaker would defend all his belts three times.

Assuming the athletic prime of Lomachenko lasts at least a couple more years, does lightweight offer enough challenges to make a longer reign interesting? In this case, it might. Along with the possibility of an eventual return by Garcia, and the development of Lopez, 20-year old Devin Haney (22-0, 14 KO) is rising in the WBC ratings. If Campbell wasn’t facing Lomachenko here, he could just as easily have been squaring off with Haney for the vacant belt.

Haney, like Lopez, could still use a little more seasoning. Both show signs of being critical pieces of the future. Two to three fights from now, Haney might be the sort of talent with the look of an heir apparent.

Maybe one day we’ll get to talk about that showdown. We won’t know until we see the unification game finish playing out. After all, no one be sure what Lomachenko would do if he won all the belts when he’s still only halfway there.

[QUOTE=chrisJS;20021851]Mikey is basically Broner with some talent and less losses. I was a big Garcia advocate once upon a time but it's frustrating. Mikey was all about picking up a quick title, dumping it and then going after another. He…

[QUOTE=Satir;20021150]Before he's too old he should go to 130 and also unify "his division" by beating Davis, Berchelt etc[/QUOTE] Good point! Loma does not have the body and style to move up much, and that means NOTHING. Did not stop…