This coming Saturday night, former multi-division champions Mikey Garcia and Jessie Vargas will collide in the ring at the Ford Center at The Star in Frisco, Texas.  The welterweight showdown will headline a card that will be streamed by DAZN.

Vargas was in the process of moving up to 154 pounds when this fight presented itself and the opportunity was so good that Vargas decided to go back to welterweight for one more fight. 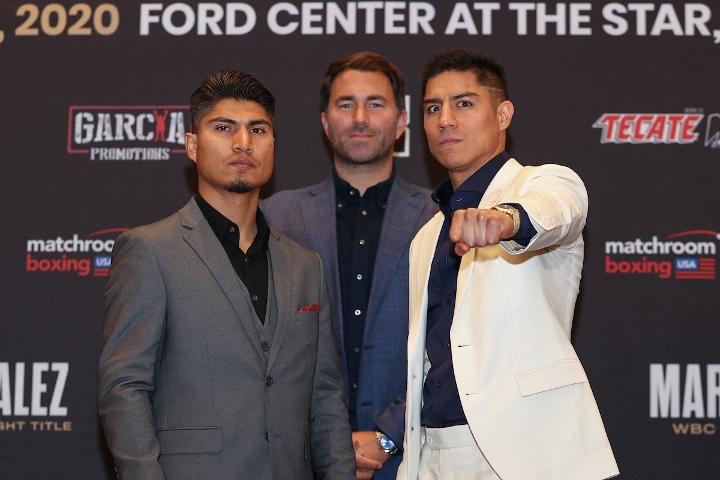 While it is still early in 2020, some observers feel this fight has a chance to be in the running for Fight of the Year.  Vargas expects fireworks in the ring and that the fans will be the true winners of the fight.

"It's always entertaining when two talented Mexican fighters face each other in the ring.  This will be no different when we go at it," Vargas told BoxingScene.com.

Making 147 has become more difficult for Vargas but he wants to assure everyone that he is having a great training camp and that he he will put on the best performance of his career next week.

"I’m glad people are excited for the fight. I’m going to give them my best on February 29th. There’s a lot on the line for me and I’m using it to fuel me. Thankfully, this camp has been exceptional. People say that all the time but this is true. I’m performing at my best right now. I am sharp and strong," said Vargas.

[QUOTE=Ca$ual Fan;20428098]Are there any ethnicity offended by that statement? Sounds insecurity if so[/QUOTE] Sarcasm brotha

Anyone who thinks Mikey has a chance is delusional. Manny had more difficulty fighting Vargas 4 years ago than he did against Thurman a year ago. Vargas was a champ at 147. Mikey hasn't won against anyone at 147

[QUOTE=Ca$ual Fan;20428091]I think that was JMM - Salido[/QUOTE] Makes more sense. JMM is a better counter puncher and he was in a few stinkers. That fight with Gainer was awful.

[QUOTE=Lopez_Boxing;20426153]Boxingscene racist police, where are we rating this title on the "That's Racist" Scale. 1 to 10[/QUOTE] Are there any ethnicity offended by that statement? Sounds insecurity if so

[QUOTE=TheMyspaceDayz;20427840]Barrera vs Salido was boring. Salido was being counterpunched so effectively that he was averaging some insanely low punch output. Classic Merchant line: “Salido told us in the fighter meeting that his wife once called him during one of his…