Vargas: If Broner Comes to Fight, I'll Pick Him Apart Bit By Bit

Jessie Vargas has knocked out only 33 percent of his professional opponents and Adrien Broner has never been knocked out.

Once their fight begins Saturday night, though, Vargas figures Broner will be surprised by what he and his trainer, Mike McCallum, consider underestimated power.

“If he comes to fight me on the inside, then that’s going to feed right into my game plan,” Vargas said after an open workout in Las Vegas recently. “Bring it on. If he wants to come and fight, then we’ll pick him apart bit by bit. We’re ready for any type of fight. Once he feels my power, he’s going to back up and choose a better route.” 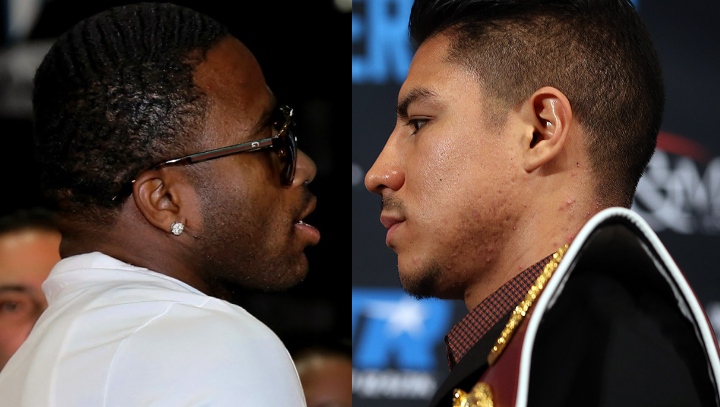 Marcos Maidana dropped Broner twice during their welterweight title bout. Broner hasn’t been badly hurt in a fight since Maidana defeated him by unanimous decision in December 2013, but the former four-division champion will face a significant size disadvantage against Vargas.

The 5-feet-10 Vargas (28-2, 10 KOs) is four inches taller than Broner (33-3, 24 KOs, 1 NC) and has competed at the welterweight limit of 147 pounds the past three years. Broner repeatedly has said he is a better fighter at the super lightweight limit of 140 pounds, yet accepted the Vargas fight at a catch weight of 144 because Vargas was willing to come down in weight to replace an injured Omar Figueroa as Broner’s opponent.

Las Vegas’ Vargas, 28, expects to produce an entertaining fight when he faces Cincinnati’s Broner in the main event of Showtime’s tripleheader from Barclays Center in Brooklyn (9 p.m. ET/6 p.m. PT).

“Adrien Broner and I are entertaining fighters who come in and give it our all,” Vargas said. “This is a fight that will have a lot of fireworks. … I’m going to switch it up. I’m here to give the fans entertainment. Some moments I’ll go after him and some moments I’ll be the counter-puncher. It’ll be based off what he brings to the ring and we’ll take it from there.”

The card headlined by Broner-Vargas will include two other title fights Showtime will televise.

Broner is currently a hair (loss) away from irrelevance. If he's serious about this fight with Vargas, hopefully he'll show it and back up all the pre-fight posturing. If he's going to resurrect his career he better come to fight…

[QUOTE=MeanestNiceGuy;18678698]I'd imagine it'll bring world peace. Lol[/QUOTE] I’ll just be happy if he stops running his mouth. He’s suck a waste of talent! He should have taken that big money deal he was once offered.

[QUOTE=MeanestNiceGuy;18675936]I don't think the catchweight will bother Vargas in this one. I honestly believes he beats Broner down, mainly because he's had enough time to prepare. Oh, maybe I just want to see Broner get steamrolled. *shrugs*[/QUOTE] I always enjoy…

[QUOTE=7not8;18675430]These are the fights that should be headlining Cinco de mayo weekend![/QUOTE] You got that right! Nice call. Vargas will whip broner’s lazy azz.