The wounds are still open and emotions are as raw as ever for Chris Van Heerden.

It’s less than three months after his father Daniel was murdered in South Africa in December, and while duty calls for the welterweight, who fights Mahonry Montes in Costa Mesa this Saturday, dad is never far from his mind, especially on those days when the last thing he wants to do is get to the gym and prepare for a prizefight.

“The days when I don’t feel like it, I think of my dad,” said Van Heerden. “He believed in me more than anyone else, so the days when I don’t feel like it, I do it because I know that if he knew I was not gonna do it, he’d be so disappointed in me. So just knowing that my dad wanted this for me, that’s my motivation. Every day. When I close my eyes, I see myself fighting for another world title, and as long as I see that, it is my responsibility to stand up and go do the work. Nobody said it’s gonna be easy, but it will be worth it.”

That Van Heerden is still here now is already a testament to hard work and perseverance. A pro since 2006, the Johannesburg native raced out to a 23-1-1 record that included an IBO title and wins over the likes of Kaizer Mabuza, Sebastian Lujan, Matthew Hatton, Cosme Rivera and Ray Narh. In 2015, he ran into Errol Spence and was stopped in eight rounds, and while a pair of wins followed in 2016, his career ground to a halt after that.

There was talk of a fight against Manny Pacquiao in 2017, but that fell apart. Then Van Heerden signed with Evander Holyfield’s Real Deal Promotions, but after a 2018 win over Timo Schwarzkopf in the first round of the WBC Jose Sulaiman Welterweight Invitational tournament, the tourney hit the skids, leaving Van Heerden in limbo again.

“Two years down the line, I’m doing everything right, but everything on the other end is going wrong,” said Van Heerden.

But with Van Heerden staying in the gym in California and manager Peter Kahn refusing to throw in the towel, some light arrived last November when Top Rank signed the welterweight standout to a deal that kicks off this weekend.

“Finally, finally, I get with Top Rank and I believe that now is gonna be the change,” said Van Heerden. “What’s frustrating is that I know I have the talent and I know I have the skill and I know I can compete with the best in the world. But in order to do that, you need to be active, and in order to get better, you need to fight. It’s tough to put on an A-class performance when you fight once a year. But finally, I have hope and I’m positive, I’m with Top Rank and I believe people are gonna see more of me and the best of me and I’m gonna have a platform to get better by being active.” 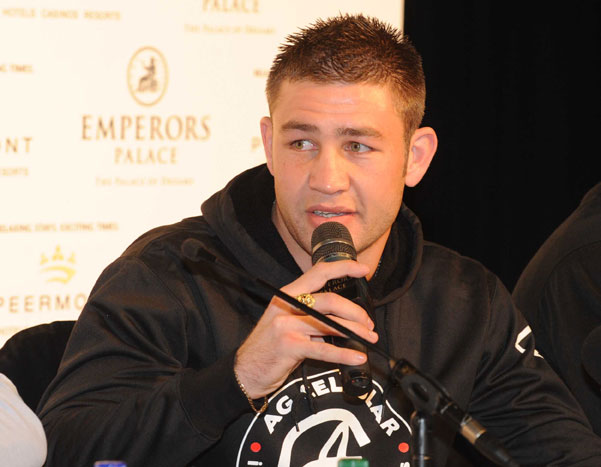 With the ESPN platform and Top Rank’s well-deserved reputation for knowing how to move fighters and putting them in a position where they control their own destiny, the 31-year-old can breathe a sigh of relief that he will be able to let his fists do the talking. And ironically, when he arrived in the United States five years ago, it was the Las Vegas-based promoter that he wanted to work with.

“When I came to America, it was with the main focus and the plan and the dream and the goal to be with Top Rank,” he said. “It didn’t happen for me, but I never lost hope and I lost faith. I’m a man of faith and finally, after five years, I’m with Top Rank. I’m with a promotion that’s gonna get me active and get me in line for my dad’s dream for me to fight for another world title. And I do feel with Top Rank it will happen.”

What a long, strange trip it’s been for Van Heerden, and thankfully, for him, the good part of the rollercoaster is coming. Of course he had to weather the rocky parts to make it here, but even the rocky parts hold some valuable lessons.

“I’ve become a wiser man,” he said. “I’ve learned, I’ve been through a lot and I’ve seen a helluva lot. I’m 31, I’ve never been knocked out in my life, never had any real damage. I lost to Errol Spence, but the referee stopped it. And as a fighter, I’ve never been to the extent where people say, ‘Oh, he got hurt.’ I do feel that the best of me is about to happen. I’ve been through a lot, I became a wiser man, and I’m excited for the journey ahead. I’m a motivated fighter.”

That’s a meaningful statement from someone who never thought he would be here in the first place.

“My dad was a professional fighter and, as a kid, I hated the sport,” Van Heerden said. “I was a scared little boy and I had no interest in fighting.”

Ultimately, it was clear that Van Heerden had it in his blood, but as he turned 18, he was about to put it aside forever.

Then Daniel Van Heerden called his son into a room for a chat.

“I need to explain to you why I’ve been so hard on you as a kid, forcing you to fight and pushing you to your limits,” said Daniel to his son. “I see myself in you.”