On a visit to Mexico City, the featherweight world champion of the World Boxing Organization, Oscar Valdez, discussed his excitement with the newly formed working relationship with trainer Eddy Reynoso, who is best knock for his work with two-division world champion Canelo Alvarez.

Valdez will work hard on defense, but he does not intend to stop being the same aggressive fighter - which has led him to a world title.

Valdez has been out of the ring since March, when he suffered a fractured jaw in a tough twelve round decision win over Scott Quigg. 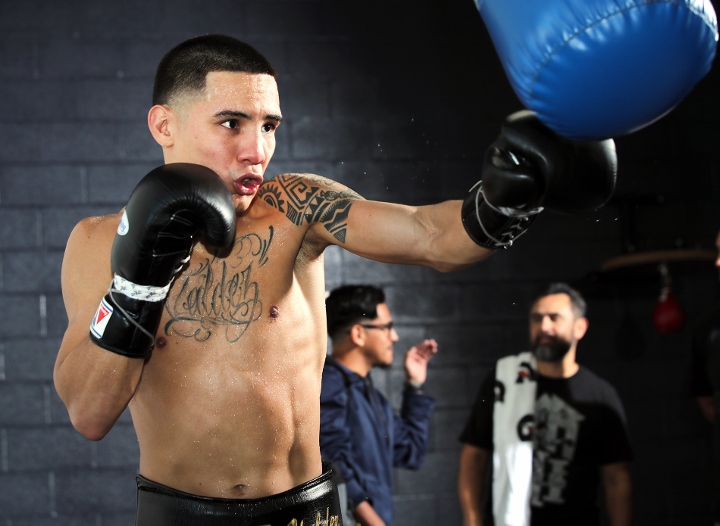 Valdez is now targeting a ring return for the month of December - or in early 2019.

"We are doing very well, as you know, with a new coach, Eddy Reynoso, who is also the coach of Canelo. We are very excited now [because] we can go to Guadalajara to start training, preparing and continue learning. They say that my return is in December, but if not, in January we will be back. We already have those dates in sight," Valdez told ESPN Deportes.

"Eddy is a coach who works well on defense, that's the best reason. And I think that among the coaches that exist, Eddy is the one who best suits my style. Not only do we know what he has done with Canelo, also with 'Chololo' Larios and others. In addition, we have talked many times, I like how the defense works and we will look for him to help me continue being that aggressive boxer. We will work on defense but also everything else, I am willing to learn what is necessary," Valdez said.

At the moment, his mandatory challenger is WBO interim-champ Carl Frampton. But Frampton is heading to a showdown with IBF featherweight champion Josh Warrington - and Valdez wants the winner.

"I want to make it clear that I'm the best in the division and there are big fights, there's Leo Santa Cruz, Gary Russell, Carl Frampton, we're looking for those fights. We have the mandatory fight with Frampton, but maybe he's going first with Josh Warrington... and if so, I can wait for the winner," Valdez said.

He should get a tune for sure though. I'm sure he will and he deserves it. Anybody at 126 right now would make for a great fight with Valdez. I hope we get Valdez vs. Mares or Santa Cruz.

There's some good fights to be made here, but I think Gary Russell is the best at the moment.

my boy Oscar joined the dark side for teh tainted taco meat :(