Usyk’s Promoter: Bellew Fight is Something The World Wants

Alexander A. Krassyuk, General Director of K2 Promotions, Ukraine and promoter of Oleksandr Usyk has confirmed his team’s number one choice is to enter the heavyweight division in the near future and face a marquee name opponent to taste the waters before an ultimate showdown against WBA/IBF/WBO/IBO unified titleholder Anthony Joshua.

The opponent could very well be former cruiserweight world champion and now heavyweight competitor Tony Bellew, who is currently enjoying the high-point of his career thanks to back to back knockout wins from underdog roles against the likes of David Haye and Ilunga Makabu.

The Ukrainian Usyk (15-0, 11 KOs) unified the cruiserweight division less than two weeks ago with a masterpiece performance in a painfully one-sided twelve-round unanimous decision victory over previously unbeaten and fellow unified belt holder, Murat Gassiev in Moscow, Russia. The event served as the host of the finals of the World Boxing Super Series cruiserweight tournament. 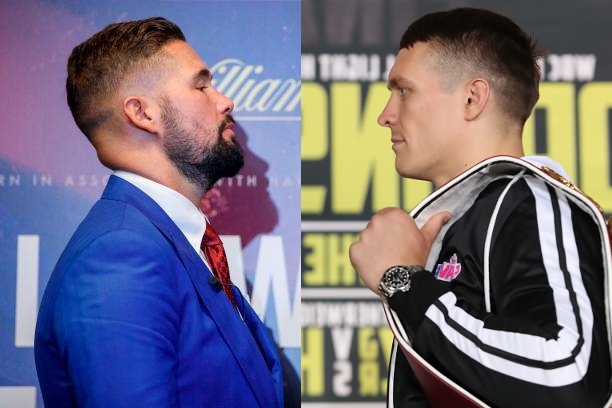 The new WBC/WBA/IBF/WBO/Ring champion Usyk stated in the post-fight ring interview his goal is to share the squared circle with Bellew (30-2-1, 20 KOs) next, a challenge the Liverpudlian responded to positively in literally minutes later.

“Moving up to heavyweight is the logical step. Usyk gained whatever he could in the cruisers so there is actually nothing else to prove,” said Krassyuk to BoxingScene.com on Tuesday afternoon.

The Ukrainian businessman, however, made sure fighting with Bellew is possibly more important for Team Usyk than the jump north, at least as their next move.

“Fighting Bellew is something that can be done within the cruiserweight division. According to Eddie Hearn’s words Tony wants to have the final chord of his career challenging the highest prize in professional boxing, [that is to become] undisputed champion.”

According to Krassyuk, the question now is more about the targeted weight division the bout is about to take place at.

“We are in touch with Eddie coordinating the terms. We plan to meet soon and to finalize the deal. Most of the issues are under discussion now.”

The Ukrainian feels Usyk-Bellew is a bout that can catch the attention of followers of the sweet science and thus putting it together is the responsibility of the powers that be in boxing.

“I believe that a conscientious promoter is obliged to deliver the fights that fans demand. I am convinced Usyk vs Bellew is one [of those fights],” discussed Krassyuk, who also had a few words on the unique matchup.

“This is something the boxing world wants to see. This is where Bellew’s determination, experience and hard punches will meet [with Usyk’s] extraordinary boxing intelligence, outstanding footwork and the endless series of high speed punches.”

Bellew as usual getting loads of love on this forum. He only fought Haye at heavyweight for the cash and made it clear from the start that he knew he was too small to fight Wilder or Joshua. Ideally he…

Bellew is a bum. Stevenson was ridiculed with no mercy for years for fighting him. He beat Haye, but that was years after the one Klitschko beat Haye up. I honestly do not get why people even mention Bellew. If…

Yes, we want that. But Bellew is a bum who beat a bigger bum Haye and now he think he is something.

It's a good fight. Bellew has built a pretty big name for himself in the UK and Usyk can make some good money by fighting him.