Usyk is Very Eager To Face The Joshua vs. Ruiz Rematch Winner

Former undisputed cruiserweight champion Oleksandr Usyk will be keeping both eyes on the year-end rematch between Andy Ruiz and Anthony Joshua.

Joshua has exercised a rematch clause and the second contest is being targeted for a date in December. 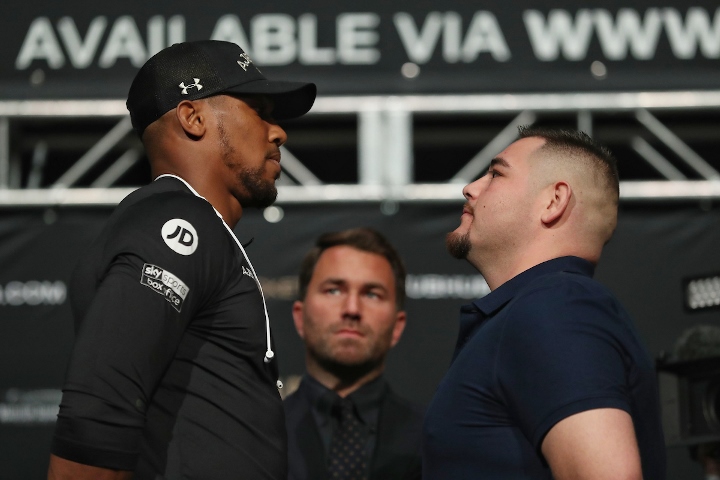 Usyk vacated his four world titles and made a move to the heavyweight division.

A planned heavyweight debut earlier this year was pushed back after Usyk suffered a training camp injury. The bout with veteran Carlos Takam will now take place on a date in the fall.

Even without a single heavyweight fight, the WBO has already made Usyk the mandatory challenger to the Ruiz-Joshua rematch winner.

"I'm very grateful that they made me a mandatory challenger. I know that it doesn't happen for no reason. They have nowhere to go. Everything is already set up in place," Usyk told Sky Sports.

"All we need is to just wait for the events to happen and I will definitely be boxing with one of them."

Usyk rejects some of the claims that Joshua lost because he has issues with shorter fighters. But if that's really the case, then Usyk believes Joshua will have a serious problem in the second fight,

Usyk dies against Ruiz, what a fuk people post here about him "running around"???? I still doubt that Usyk can win Takam, that depends on many factors including how good he recovered from injuries and laying out but Wilder, Ruiz,…

He needs to prove himself first at the weight

[QUOTE=kafkod;19949642]It was about 10 seconds before the bell. Usyk ducked a follow up punch, tied Gassiev up, then stepped around to get behind him. The bell rang before any more punches were thrown, but Usyk didn't looked dazed or shaken…

[QUOTE=_Rexy_;19949619]I might be combining that punch and the joe smith jr/Bivol one together in my head then, because I thought the punch was RIGHT at the bell.[/QUOTE] It was about 10 seconds before the bell. Usyk ducked a follow up…

[QUOTE=kafkod;19949617]He got caught by a well timed right flush on the chin by Gassiev. It shocked him, but even then he wasn't rocked. He ducked under a follow up punch and tied Gassiev up.