Derek Chisora arrived at the weigh-in for his bout against Oleksandr Usyk dressed like The Joker, albeit a giant, musclebound version of the normally spindly Batman villain.

In the Batman universe, The Joker is a criminal mastermind who uses gimmicks and traps to thwart Batman’s powers. He has no real superpowers—rather, he has no moral compass whatsoever, and will go to lengths nemeses would normally not stoop in order to take out Bruce Wayne.

On Saturday night, Chisora might have behaved more like Bane, but there were elements that were out of the Joker playbook as well. By defying boxing convention and simply mauling Usyk, he seemingly pushed the former cruiserweight kingpin to his physical limit, even if the scorecards on their own don’t corroborate that.

In his second bout at heavyweight, Usyk defeated Chisora by unanimous decision, with scores of 117-111 and 115-113 twice.

For significant periods of time during the bout, Usyk looked extremely uncomfortable, as if he was running out of room trying to evade his 255-pound opponent, who outweighed him by nearly 40 pounds. Particularly in the opening four rounds, Chisora chased Usyk to the ropes repeatedly, clubbing him with wide hooks thrown from the same position a sidearm pitcher might throw the ball, and occasionally a swinging overhand right.

Over time, Chisora’s frenzied attack and Usyk’s inexhaustible footwork tired Chisora out, and the uncomfortable moments happened less frequently, but round after round, they still happened. Usyk did indeed win the bout—one could scarcely find a Twitter user of repute or not who felt that Chisora had actually won—but whether your scorecard at home was closer to 117-111 or 115-113, there was still a palpable level of distress that Usyk was under throughout.

Stylistically, the two men couldn’t have been more different. Usyk is a beautiful boxer: a fluid, precise operator who doesn’t box like anyone else in the heavyweight division. Left to his own devices to shadowbox in an empty ring, Usyk would be a mesmerizing sight, a stage dancer who happens to love punching. In fact, when he is shadowboxing and training, he often does break out into traditional Ukrainian dance, sometimes mid-round, as if he’s overcome with happiness in the ring. Even the way he describes his performances is in a verbiage one might expect from a performer rather than a puncher.

“I think my boxing was good. It is really testing at heavyweight. He was a big guy, a hard guy. It's beautiful boxing (at heavyweight), I love boxing,” he said following the bout. 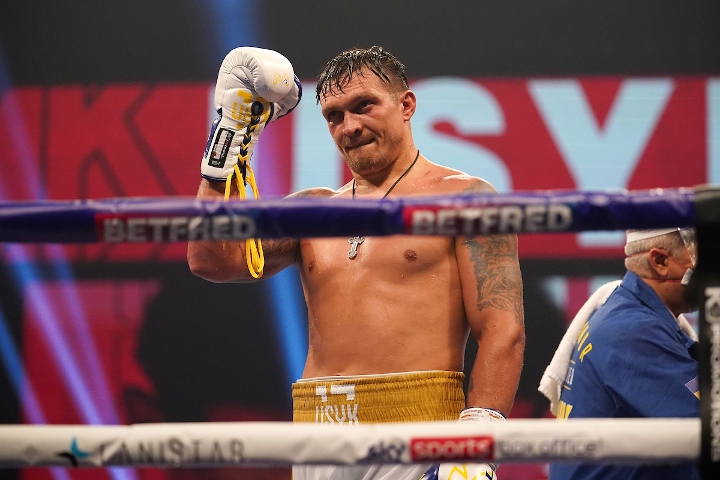 In terms of pure boxing ability, Usyk is one of the sport’s very best, pound for pound. But as unique as his attack is, it at least resembles a conventional boxing approach. Chisora’s lack of convention is in his complete disregard of boxing’s tacit agreements altogether. In his stance, he looks like a cross-armed plodding pressure fighter, but in practice, he wings punches from bizarre arm angles, he’ll miss with wild overhand rights and swat at his opponent with the back of the same hand he missed with, and sometimes, he’ll even take full rounds off to catch his breath before charging out three minutes later.

“I gave a couple rounds away, one hundred per cent,” said Chisora, who felt he won the fight. “I think I was pushing the pace. But, the judges saw it a different way. I'm just disappointed.”

The main question coming out of this fight with regards to Usyk’s future prospects at heavyweight is this: Were his struggles with Chisora, however serious and elongated they were, due to stature or style?

Usyk is an undersized heavyweight by today’s standards, standing 6’3” and weighing less than 220 pounds. He was moved around by Chisora in the clinch, and seemed troubled by his mass at times, although clearly not enough to cost him the fight. But Chisora’s size comes in a different package than other top heavies’ do. “Del Boy” is built more like a linebacker, while Anthony Joshua, for whom he is now the mandatory challenger, is more like an NBA small forward.

One has to wonder if Usyk would actually fare better with someone like Joshua who will follow boxing convention a little more closely than Chisora ever would. Save for moments when he’s hurt opponents, Joshua would seldom sell out to rush and crowd an opponent. Joshua is somewhat adept on the inside, particularly with uppercuts, but his game is still a long range one, particularly after tactical adjustments made following his shocking loss to Andy Ruiz.

As long as one stands at typical boxing range with Usyk, even with a reach advantage, his skill and in particular his footwork give him a chance to comprehensively outbox them.

One thing is for certain: Watching Usyk walk the tight rope against the best heavyweights in the world will make for compelling television, just as it did against Chisora.

Even Usyk, who couched his assessment of himself in the fact that he had been out of the ring for a year, knew that his performance was far from flawless on Saturday.

“I gave myself a three out of ten,” he said.

Usyk’s trademark gap tooth smile and playful nature returned when the final bell rang, but it was nowhere to be found for the 36 minutes prior. As DAZN announcer Nick Halling commented during the bout, “this is not enjoyable for Usyk,” which is notable for a fighter who normally has more fun than anyone in the sport seems to.

Perhaps he would have more fun with a less sinister villain, so to speak.

[QUOTE=Boxingfanatic75;20857217]Don’t sleep on Byrd. He may not have been a KO beast but he did have power. Over half his wins were by KO. The problem with Usyk is that he didn’t carry his power to HW. And without power…

[QUOTE=Roberto Vasquez;20859196]I think this is a good point. AJ always looks like he has stamina issues. He looked fine in Ruiz II but he will probably come in bigger against Usyk[/QUOTE] One thing is for sure. Usyk can go even…

[QUOTE=JakeTheBoxer;20857977]There is also a question if Joshua, DDD and others are able to follow usyk`s tempo? they have big muscles. Muscles use a lot of oxygen..[/QUOTE] I think this is a good point. AJ always looks like he has stamina…

I think AJ will beat Usyk. AJ has a brutal left-jab. I think he will probably break Usyk down. AJ does has that poor chin tho.... As for Usyk. Chisora is a decent HW but he's not in the top-10…

Usyk won't have the luxury of being able to pot shot as much from the outside if he ever fights Joshua. Joshua is taller, longer and bigger. Usyk will have to take risks by closing range to land shots and…