Sanjeev Sahota will return to the ring next month.

The 26-year-old Hornchurch super-lightweight will be looking to move into double figures as a pro when he boxes on a BT Sport-aired show.

Sahota (9-0, 3 KOs) has been confirmed as an addition to the undercard to Frank Warren’s ‘The Boys Are Back In Town’ card on December 9 at the Copper Box Arena, which will also be screened on BoxNation.

He was last in action last month, on October 7, at the Brentwood Centre in Essex and will now join Archie Sharp on the James DeGale and Lee Selby co-headed bill.

DeGale will defend his IBF super-middleweight title against Caleb Truax in his first fight in the UK since November 2014, while Selby faces Eduardo Ramirez in a defence of his IBF featherweight belt.

Johnny Garton will fight for the vacant IBF European welterweight title, with his foe still to be determined, while Joe Mullender will fight for the same title in the middleweight division and, as previously reported by Boxing Scene, former Team GB starlet Harvey Horn will make his professional debut.

There is also action for Umar Sadiq, Hamzah Sheeraz and Ben Smith. 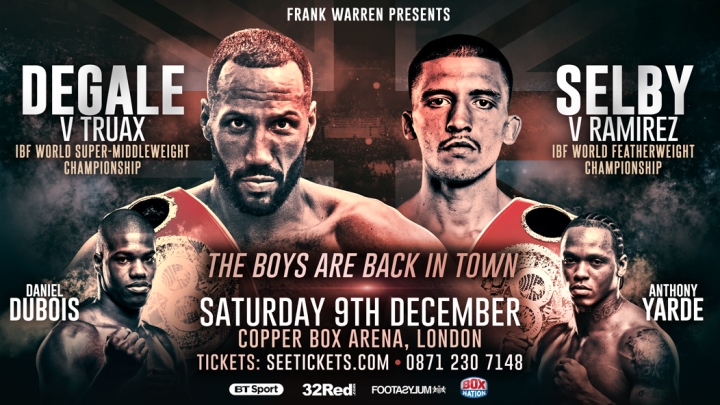 IN OTHER NEWS: EUROPEAN champion, Natasha Gale, and 2014 world championship silver medallist, Lisa Whiteside, will compete in the GB Boxing Championships 2017 at the English Institute of Sport Sheffield on Thursday 7 December 2017 (doors open at 6.30pm, boxing begins at 7pm).

Gale and Whiteside are preparing for the event at a warm weather training camp in the Canary Islands with the GB Boxing squad.

Preston’s Lisa Whiteside, who won the title in 2015 but did not compete last year, said:  “The GB Championships is the biggest national event we have and it will be good to box at home in front of family, friends and local supporters. We compete all over the world and very rarely in the UK, so this is an event that the boxers in the GB Boxing squad look forward to.

The GB Boxing Championships will feature 10 men’s weights and six for women.  It is an opportunity for boxers from England, Scotland and Wales that are not currently part of the Olympic boxing programme to force their way into the reckoning for Tokyo 2020 by defeating a boxer from the GB Boxing squad and securing an assessment to join the World Class Performance Programme (WCPP) as a funded athlete.

Who cares, this should billed cherrypick Daniel Garcia style, DeGale should fight Daniel Yaqoub in a 166 catchweight tbh, there both under Hearn