Light heavyweight can arguably claim to being the most stacked division in boxing right now. If not the most stacked it is certainly up there as far as its roster of fighters goes, while many of its top practitioners possess dynamite in their fists and a host of highlight reel KO’s on their CV’s.

While most fans will be familiar with names like Ward, Kovalev or even Beterbiev they may not be aware of a young Chechnyan, just 22 years of age but already with 18 fights under his belt, yet still flying below the radar. Umar Salamov stands an impressive 1.91 meters and has already won the IBO Light heavyweight title in his short career. He did it winning easily against the cagey southpaw Bob Ajisafe, a fighter who had once given Tony Bellew all he could handle.

In addition to building a solid record since his professional debut in 2012 Salamov has also found himself quality work in sparring ex-heavyweight champion Wladimir Klitschko during a training camp Klitschko held in Miami. It was at this camp that Salamov first came across Kevin Barry who was also attending with his heavyweights Joseph Parker and Izu Ugonoh.

After some discussions with manager Kazbek Aslambekov and a few logistical issues to sort through, Salamov now finds himself living in Las Vegas alongside Barry, Barry’s family and WBO Heavyweight Champion Joseph Parker. It is in fact this connection to Barry and Parker which sees him fighting Emil Markic on the undercard of Parker’s first WBO defence this coming Saturday in Auckland, New Zealand. 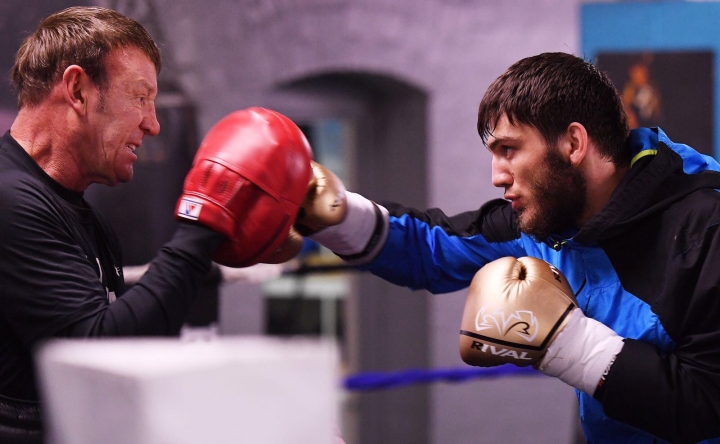 Boxing Scene took the opportunity to sit down with Umar and also manager Kazbek, acting as translator, to catch his thoughts on the super-hot Light Heavyweight division and where he sees himself fitting into it moving forward.

BOXINGSCENE.COM: Tell us, how did a fighter from Chechnya end up training with a Kiwi, Kevin Barry and about to fight in New Zealand?

Umar: We first met each other at a Klitschko sparring camp in Miami. I’ve had many coaches, mostly Russian and Chechnyan over my career who speak my mother tongue. I didn’t speak any English however as soon as I started working with Kevin I knew exactly what he was trying to tell me.  As soon as we worked together I knew that was my coach.

BOXINGSCENE.COM: What have you found to be the biggest difference between a coach that employs more American methods against his previous Russian trainers?

Umar: The biggest difference is European trainers tend to have me standing up much taller. With Kevin, I’m learning to bend my knees a lot more. There are many more tricks that I’m learning as well with these new systems.

BOXINGSCENE.COM: How difficult is it to adapt to a new style having trained a certain way all your life?

Umar: It is not easy but I’m trying to do my best. The most important thing is you must have trust in what your coach is trying to teach you and I have that.

BOXINGSCENE.COM: How challenging is it to learn with the language barrier?

Umar: As I said before I understand perfectly what Kevin is teaching me, the language of boxing is universal. But yes my interest in English is growing!

BOXINGSCENE.COM: And how have you enjoyed training alongside a world champion in Joseph Parker?

Umar: It’s been great to train with a world champion and watch how he prepares and see what he does day to day.

BOXINGSCENE.COM: There is a big difference between Chechnya and Las Vegas. How have you found the move and particularly being away from your young family?

Umar: It is actually easy because everything I do I do for the future of my family.

BOXINGSCENE.COM: What is the state of boxing in Chechnya right now? Is it popular?

Umar: It’s actually very popular. Our president Ramzan Kadyrov is a very big boxing fan, he used to fight himself. No matter where I am fighting in the world, no matter what time, he always tunes in to watch and all my fights are shown in Chechnya. He has been very supportive and has set up a boxing academy as well as a series of world class gyms in Chechnya. It’s great to have my countrymen behind me.

BOXINGSCENE.COM: Do you see yourself fighting mainly in Chechnya or America?

Umar: I don’t care to be honest. I will go anywhere the big fights take me. I don’t have a preference.

BOXINGSCENE.COM: In saying that how did you view the Kovalev/Ward fight? Do you think that Kovalev suffered being the foreign fighter on the scorecards?

Umar: Yes, that does worry me a little. Let me put it this way, the fight was fought in America so Ward won, but if that same fight had been fought in Russia I believe Kovalev would have got the decision.

BOXINGSCENE.COM: Looking at yourself, when do you feel like you’ll be ready for those elite level type fighters?

Umar: Honestly last night I was thinking about that and the answer is right now! (Laughs)

At this point his manager Kazbek politely adds, “Obviously a young fighter is full of self-confidence and will fight anyone that is put in front of him.  It is my job as manager along with Kevin as Umar’s trainer to plot the best course for him. We would like to see maybe another year of building up Umar and then we believe he will be ready for those top guys.”

BOXINGSCENE.COM: You are fighting for a WBO International Light heavyweight belt that was recently held by Andre Ward. How does it feel in your young career to be fighting for a belt held by someone like Ward?

Umar: I’m very happy that I’ve got the chance to fight for that title. Let me assure you I will win this belt and that naturally helps with my ranking within that organisation as well.

BOXINGSCENE.COM: Have you had much of a chance to have a look at your opponent Markic and study much tape of him?

Umar: Well firstly I hope it’s gonna be a good fight, he has only one defeat. From what I’ve seen he is a come forward type fighter which I like, I think that suits my style best.

BOXINGSCENE.COM: There are a lot of Eastern European fighters in boxing’s upper echelons right now. What is it that makes fighters from this region so special?

BOXINGSCENE.COM: Outside of the champions Ward, Stevenson and also Kovalev, who do you view as the fighters just below that level?

Umar: Well myself of course! Beterbiev and Gvozdyk are the two that I think have the most potential. However, all the guys we are discussing, the champions and the contenders are all aged around 30-32 or even older. I am only 22 so I feel there is a much longer future for myself than the other fighters I have mentioned.

Indeed, when looking at Salamov’s age and the raw tools at his disposal there does seem to be enormous upside in the young Chechnyan pugilist. Like any emerging prospect, he will need to be moved along in the correct way, that the right fights are made at the right time but everything points to the emergence of Salamov’s name in the near future, as someone who belongs amongst the cream of the division.