Tyson Fury's Cutman: That Was Worst Cut That I've Ever Seen

Tyson Fury’s rematch with Deontay Wilder is not in jeopardy despite the Gypsy King suffering two horror cuts against Otto Wallin.

The British heavyweight star came through a thriller at the T-Mobile Arena in Las Vegas to keep alive his return clash with WBC champion Wilder.

Fury, 31, was cut twice in the third by a left hand from the southpaw Swede and went to hospital immediately after he was announced a unanimous points winner. 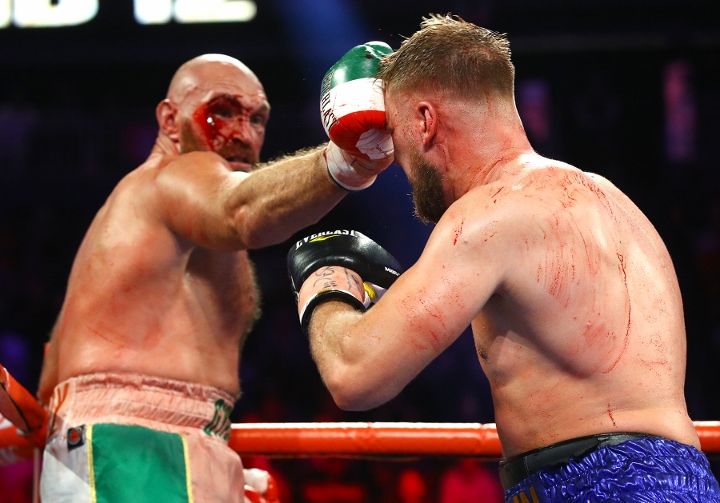 But promoter Frank Warren is confident Fury won’t need surgery and will be ready to face Wilder on their February 22 date if the American beats Luis Ortiz in November.

Warren said: “The doctor said it was a clean cut so it doesn’t need microsurgery inside and he said it would stitch well.

“Fingers cross it will be alright.”

But Warren has urged his fighter to take a break from training and ensure he is optimum shape for the highly-anticipated rematch of their dramatic December draw.

“He has five months until February and we will see what happens,” he said. “Of course he does need a rest because he has been in camp for a year.

“He has a cut, he can’t train with a cut. All he has got to do is maintain a decent weight to work on for when he can be in the gym back sparring.

“It won’t stop him running, it won’t stop him doing other things. He needs a rest, he needs a break with his family. He will have a couple of months off and three months to prepare for the fight.”

But Fury’s cutsman was in fear the fight would be stopped as blood poured from a gash over his right eye and another cut on his eye lid.

The ringside doctor checked the cuts twice but referee Tony Weeks allowed the bout to continue which kept alive hopes of the rematch with Wilder.

Mexican cutsman Jorge Capetillo said: “That was probably the worst cut I've ever seen in my years of doing cuts.

“But I knew the capacity of Tyson, I knew his experience and his will to fight so I knew I had to get it right, put my job on the line and get the work done so he could continue fighting and not get stopped.

“I was surprised that the doctor didn't stop it because it got really bad, but I was just doing my best to keep it clean and try to prevent the blood from pouring into his eyes.

“Thank God I did that and the doctor gave us the green light so he could perform.

“We knew that round by round he was going to chop him up.

“I've been doing cuts for 10 years now. Since he came to Vegas he asked me to do the cuts and I'm very grateful for that.”

Fury's face looked worse, so based on the argument used by some here he mustve lost....right? I've literally read posters here claim its clear that a fighter lost, because their face looked worse. Theyve used said logic for some high…

[QUOTE=etech1;20063111]Wilder would have ko ed him in 5 with the way he was moving.[/QUOTE] [COLOR="Red"][FONT="Comic Sans MS"]Fury would have planted his feet, dug deep, and went toe to toe until one of them dropped to the canvas. [/FONT][/COLOR]

As Terence Crawford stated that cut was so bad that the fight should have been stopped. I hope that decision to keep fighting doesn’t show itself to be major issue in Tyson’s career.

[QUOTE=Reverb;20063002]Yes, his was significantly worse than Fury's. V Klitschko had severe and free flowing cuts inside his mouth and on his tongue also. It seems that notable fact is being overlooked. Not only that, but he had way more than…

Wilder would have ko ed him in 5 with the way he was moving.