TYSON FURY revealed he will fulfil a childhood promise when he fights in Las Vegas on June 15.

Fury, 30, has fought in America twice before with the latest his dramatic draw with WBC heavyweight champion Deontay Wilder in LA in December. 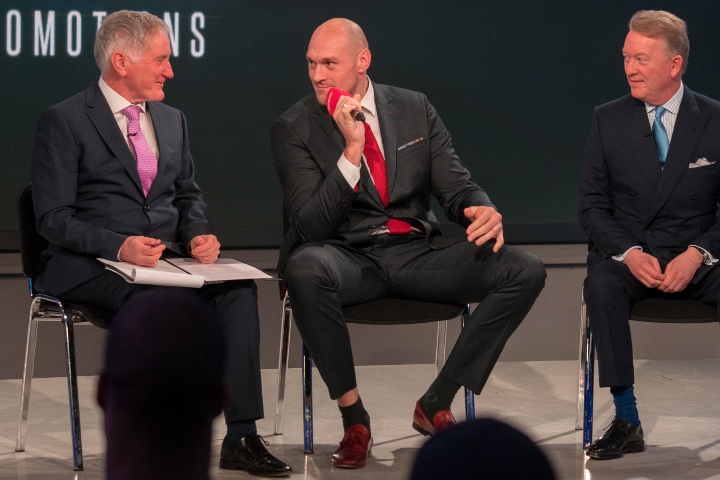 But now he makes his debut in Sin City.

“Lot of iconic fights have been there. I remember waking up to Ricky Hatton v Floyd Mayweather many years ago.

“I made a promise to myself when I was young that I wouldn’t go there until I fought there.

Fury is facing an unbeaten foe Schwarz who is a relative unknown.

But the British heavyweight star insists it will be a thriller in Las Vegas.

The unbeaten heavyweight said: “This is Las Vegas and it’s show time. I’m looking to put on an explosive performance in America.

“I’m not underestimating him. He is coming for a war. I don’t need to talk up Tom Schwarz. He’s unbeaten.”

Fury penned a lucrative deal with ESPN and Top Rank in America which scuppered immediate hopes of a rematch with American star Wilder.

But Top Rank chief Arum has big plans for Fury, who was wearing a suit and shirt with the faces of some of the best heavyweights in history on at the press conference, across the Atlantic.

They include taking him on big US chat shows such as Jimmy Kimmel Live.

Arum said: “We could do for Tyson what we did for Foreman. He became larger than life.

“When I met with Tyson I realised that he will mesmerise.”

[QUOTE=denium;19741758]Fury has been in plenty of wars. YDKSAB.[/QUOTE] Boo-hoo. Your ava doesn´t exactly scream "objective". And no, making silly defensive mistakes earlier in his career doesn´t mean he "went to war". He´s a great boxer now tho.

What a joke!! Feel bad for the BT subscribers